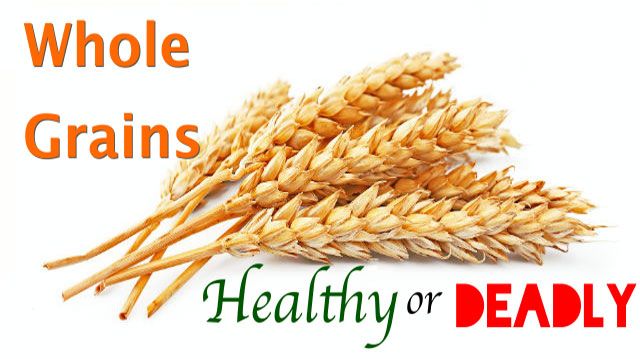 Whole grains are one of the most heavily marketed, medically recommended health foods out there. They are the largest category in the government food pyramid, with six to eight servings recommended per day for adults. But did you know that grains can cause blood sugar dysregulation, mineral malabsorption, chronic inflammation, leaky gut syndrome, and autoimmune disorders?

You might be thinking, “I’ve heard about this. Gluten-free diets are a fad outside of the few people with full-blown celiac disease.” However, the truth is that regardless of whether you are celiac or gluten intolerant, whole grains inflict many damaging inflammatory and digestive effects. Let’s examine the details.

Grains are often touted for their high fiber content, and sometimes even as a source of protein. While this is not untrue, we are looking at only 15 percent protein content, and significantly less fiber than is provided by root and leafy vegetables.

For example, 200 calories worth of whole grains contains just six grams of fiber, eight grams of protein while piling on 38 grams of carbs, with only trace amounts of vitamins and minerals.

Conversely 200 calories worth of spinach contains 23 grams of fiber, 27 grams of protein, and 35 grams of carbs. It rates much lower on the glycemic index due to the nature of the carbohydrates, and delivers impressive amounts of vitamin A, B vitamins, vitamin C and vitamin K.

When you also take into account the inflammation and lowered absorption of other nutrients caused by grains, it’s just not worth the trade-off. Vegetables, on the other hand, deliver much greater nutritional value while being easy to digest, pro-alkaline and anti-inflammatory.

Since the fibrous part of the grain gets pulverized by milling, it is easy to consume larger amounts of grain. “It is so much easier to overconsume any food where the work of chewing or digesting or separating fiber from starch has been done for us,” says functional nutritionist Julie Starkel.
The macronutrient breakdown of whole grains leans heavily toward carbohydrates (80 percent), and they are treated essentially as sugar in the body. This leads to a spike in insulin, and eventually inflammation and weight gain.

Grains contain phytic acid, a mineral blocker that prevents absorption of calcium, magnesium, iron, copper and zinc. Phytates are found in the bran of all grains as well as in the skin of seeds and nuts.

This is how grains, nuts and seeds protect themselves against digestion by animals that eat them, so that they can be excreted relatively whole and still be able to grow and spread their species.

Even though grains have only been widely consumed by humans for about 10,000 years, up until recent times they were left to sprout before they were ground up to make flour. Once the grain has sprouted, it loses that defensive mechanism and becomes easier to digest.

However, in large-scale modern agriculture, whole grains are ground in the unsprouted state, complete with mineral-blocking phytic acid.

Lectins are toxic molecules that remain whole in our digestive tract. They are very similar to proteins in the human body, which can cause damage and confusion in the gut and result in an autoimmune response.

The result can be leaky gut syndrome, allergies to anything from pollen to pets, or even full-blown inflammatory and autoimmune disorders. These can include high cholesterol, altered hormones, infertility, arthritis, headaches, and thyroid issues, to name a few.

Too much of one food group

Even if grains were to be health-promoting and nourishing, they have become far too ubiquitous in our daily diets. In fact, wheat flour is the most widely used food product in the world. How many of us eat cereal or toast for breakfast, a sandwich for lunch, and pasta for dinner? These meals may have a thin layer of vegetables or meat on them, but the majority of the dish still consists of grains as a base or carrier for the other ingredients.

Overall, our cultural norms result in a diet weighted far too heavily on the consumption of grain. Whether they are refined or whole, it doesn’t matter. Relying so heavily on one single category of food, no matter what it is, cannot result in balanced health. With this grain-heavy diet, we end up sorely lacking in the other food groups such as protein, vegetables, fruit, healthy fats and dairy.

Although today’s whole wheat is not technically genetically modified, it has been extensively crossbred and hybridized to change its characteristics. Experts point out that changes within the last 40 years or so have resulted in wheat that is higher in gluten, contains more of the super-starch amylopectin A, which is highly fattening, and exerts an addictive effect on the human brain.

All of these adaptations mean that whole wheat consumption contributes to chronic diseases such as diabetes, heart disease and obesity. The dramatic increases in these illnesses correspond closely with the last few decades, when food production has become highly industrialized.

Pesticides and chemicals on grains

Whole grains can be considered a whole food, but they are unfortunately not immune to the evils of processed foods. Although they certainly have more to offer than refined grains, whole grains are still subject to the same range of chemical treatments during growth, harvest, processing and storage.

The last three decades have seen increasing amounts of North America’s wheat get treated with pesticides and herbicides such as Roundup during growth. There is even a theory that many of the people who suffer from gluten intolerance are actually reacting to the chemicals on the wheat, rather than the wheat itself.

Many other insecticides are used on grains, because species of insects increasingly become resistant, so stronger and newer chemicals must be applied to meet the challenge. Those promoting the use of insecticides claim they are safe because they work via the shikimate pathway, a biological mechanism that insects have but which doesn’t exist in humans.

However, the friendly bacteria that live in the human gut, and which support the majority of our immune system and many other bodily functions, do have this pathway. Therefore, experts on the leading edge have begun to raise concerns about unexpected effects of these agricultural chemicals, which were previously believed to be safe for human consumption.

Another unsavoury consideration is that grains are irradiated before they are stored in order to control insects and extend shelf life. A study on children fed irradiated wheat found that this may contribute to abnormal cell formation, lower immunity and decreased fertility.

Other chemicals are sprayed into grain storage bins and added to the upper layer of grains to protect against pest attacks in the warehouse. These include pyrethrins, which are neurotoxic to humans, and cyfluthrin, which is toxic to water ecosystems. Then there are bromides and phosphines, which are used to fumigate grain storage facilities whenever live pests are found within a sample. These chemicals have been shown to cause malformation of embryos and damage to genetic material.

Finally, organophosphates are gas-based pesticides that are among the most widely used in the United States. These chemicals, even in legally permissible amounts, have been shown to cause increased levels of ADHD. This is because they inhibit the breakdown of a neurotransmitter called acetylcholine, which results in hyperactivity. 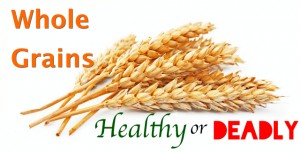 Traditionally grains were soaked and sprouted or fermented. These processes effectively disarm the toxins of the seed and result in a relatively nourishing, digestible food. Until recently, grains were also grown in healthy organic soil without the use of any chemicals, and never cultivated in overblown, subsidized, monoculture plantations like those we have today.

Grains are naturally a “high-maintenance” food requiring extensive traditional preparation to become digestible and nutritious to humans. On top of these issues, the modern farming and processing methods of grains have made them even less suitable for human consumption.

It’s clear that the grains in our supermarkets today have unfortunately become highly inflammatory and toxic pseudo-foods. They make up far too much of our cultural diet and mainstream nutritional recommendations.

Six to eight servings a day? No thanks!

Stick with vegetables and protein for the vast majority of your diet. For the occasional healthier baked treats, try using safe starches such as almond meal, flax meal, white rice flour and coconut flour instead.