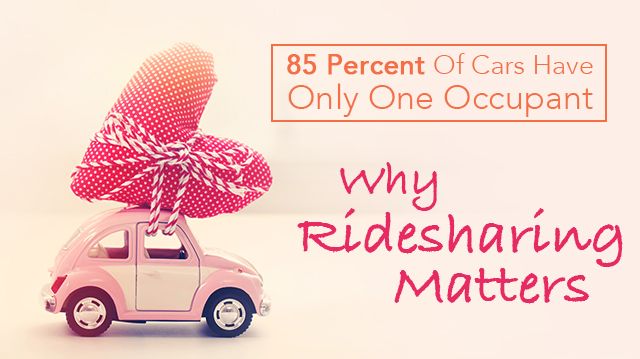 Americans — and many other cultures around the globe — love their cars. For many people, a car is not only a way to get around but a symbol of independence and often status. Is it any surprise that our streets are often clogged with traffic?

According to Mobility Lab, about 85 percent of the cars on American roads are used to transport only one person. That’s a lot of empty seats, and when we think about it, a lot of unnecessary extra traffic. With climate change concerns on the rise, it’s critical that we consider carbon emissions in our daily lives — and traffic is a huge source.

The United States Environmental Protection Agency (EPA) states that “a typical passenger vehicle emits about 4.7 metric tons of carbon dioxide per year.” That’s just one car! If there’s only one person in 85 percent of cars in this country, then we’re simply not driving smart — from an environmental perspective.

More vehicles on the road also obviously means more traffic congestion. We’ve all been through the rush-hour grind when commuting. It’s not only frustrating and a key factor in many people’s stress levels, it also increases carbon emissions significantly.

All of that stopping and starting during rush hour and other routine traffic jams add up to an even higher environmental burden. So what can we do about all this? Many of us have to drive to work because public transportation is sorely lacking in many areas, and many of us simply live too far away from the workplace to walk or bike.

The answer might be in ridesharing and carpooling: filling up the empty seats in our cars, and thus reducing the number of cars on the road.

Mobility Lab writes: “Every day we ignore a surplus of transportation capacity: the empty seats in the vast majority of cars on the road. But as driving attitudes, data, and technology change, it’s becoming easier for people to share rides — taking cars off the road and easing congestion.”

Additionally, Mobility Lab explains: “Sharing rides — bringing back the once-popular carpool option — has become easier and easier as attitudes and technology change. By moving a few commuters into those empty seats and getting their cars off the highways, cities can start to see much larger reductions in rush-hour congestion.”

Businesses have started to capitalize on the ridesharing opportunity, with services such as Uber increasingly being used. However, in small towns and farm communities, ridesharing services may not be available. Also, many people still choose to drive solo and may be uncomfortable giving people they don’t know a ride or getting into a car with someone they don’t know well.

Ridesharing isn’t for everyone. However, if it’s not for you, you may want to seriously consider carpooling with someone you know. If you live in the same area as some of your coworkers, consider driving together. Each person can take a turn driving on a designated day. There are many benefits to this once-popular activity.

You’ll have people to ride to work with, which may make the commute more fun (and potentially less stressful), you can take turns driving so that you don’t have to be behind the wheel every day, and you’ll be doing a service to the environment.

The planet needs our help, and one of our most common activities — driving — is causing significant carbon emissions. It’s time to ease Earth’s burden a little bit.

Do you use ridesharing services? If so, what has your experience been?