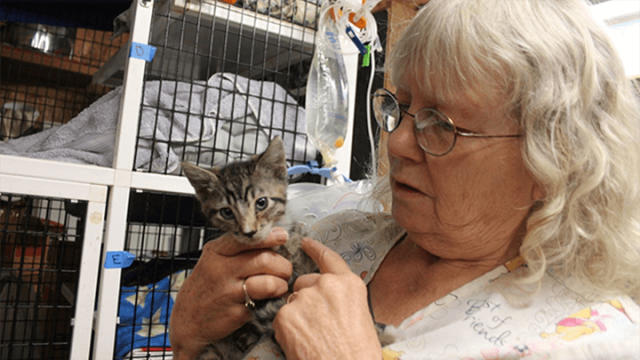 Defying the warnings of a 911 official, Jean Favini placed herself in harm’s way to save cats from a smoke-filled building. Now, thanks to this cat rescue volunteer, 19 cats survived the fire.

The fire began at about 4:30 p.m. inside Oasis for Animals, a no-kill rescue organization located in Langley, Wash. According to the Oasis for Animals Facebook page, it’s believed the fire started on the top floor of the building where they housed and cared for kittens and a few adult felines.

The cause is thought to have been an electrical fire inside a microwave oven, which was not being used at the time. Because of plastic bowls, containers and cat food in plastic cups near the microwave, the smoke became toxic and black, posing a severe threat to the cats close by.

The building next to Favini’s home is an accessory dwelling unit that she converted into a shelter and the Oasis’ headquarters. Unfortunately, the smoke detector failed to activate when the office filled with smoke. It was only when she heard cats meowing from her driveway that she noticed smoke pouring from an outside vent.

Although there were no flames to put out, there was thick, black smoke. Favini was told to stay outside by the 911 operator. But, frantic to save the cats, she defied the warning. With a towel wrapped around her face, Favini rushed into a smoke-filled office to save its 24 occupants.

Favini, the president of the no-kill cat rescue organization, made several trips into the building, returning each time with armloads of cats. Together with her husband and local firefighters they managed to remove all the cats.

To save the cats, Favini wrote on Facebook that she put her mouth over each kitten’s nose and mouth, forcing air into their lungs. She then placed them in carriers, with several in each crate. Sadly, two cats didn’t make it, even with oxygen administered from firefighters. Then later, two more needed to be euthanized.

“It was just heartbreaking,” said Favini. But she is happy she was able to save the majority of cats.

Favini worked with a vet to treat the injured felines. Later, she continued with nebulizer treatments, cleaning the discharge of black soot from their noses and administering fluids. She gave them heated beds and tried to get them to eat a little. Favini reports that many of the cats have fluid in their lungs that require clearing. They also need antibiotics to stop infections.

“I thought we were going to lose them all,” Favini told the South Whidbey Record. “My face, hands and hair were black, so I had to go to the hospital later to get tested for smoke inhalation.”

After so much trauma, Favini said she’s happy to just see the cats once again jumping around in their cages and breathing normally. To help pay for the medical expenses, Oasis for Animals is taking donations via their PayPal account.

The value of animal life

People often debate back and forth about the value of an animal’s life over a human’s. What’s your take? Would you risk your life to save a cat — how about 24? Let us know what lengths you’ve gone to for your animals and where you’d draw the line. In any case, those cats were lucky to have Ms. Favini nearby. Kudos!