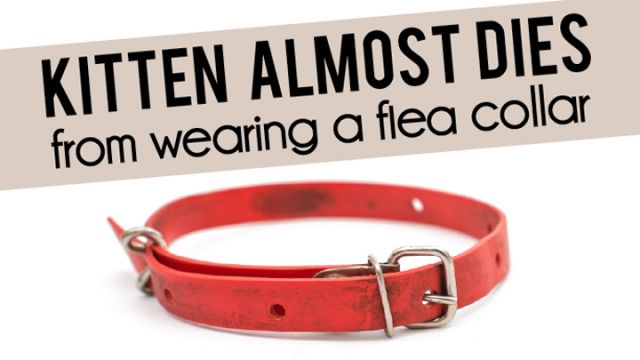 Sometimes with the best of intentions, we inadvertently make mistakes that could seriously injure a beloved pet. Such was the case with a tiny kitten wearing a flea collar.

When a kitten was admitted to an animal hospital in Connecticut, she was covered in fleas and suffering from extreme seizures. But according to Lona Harrelle, owner of All Friends Animal Hospital the kitten’s distress was a result of the flea collar it was wearing. Harelle told the Dodo that cheap flea collars produce a toxin that gets into the animal’s bloodstream. See the video of the kitten having a seizure at the animal hospital here.

The kitten’s owner told medical staff that she had used a flea collar, intended to kill both fleas and ticks. Propoxur, a chemical used in certain brands of flea collars, has been known to cause symptoms like the kitten experienced. Some companies have discontinued using this harsh pesticide, so it’s best to check the label before purchasing. Better yet, why not use a natural remedy for fleas?

Apple cider vinegar is a natural remedy for fleas

Apple cider vinegar doesn’t actually kill fleas, but it will create an unpleasant environment that keeps fleas at bay. Both smell and the taste are distasteful to fleas. That means they’ll avoid your pet, suggests Pet MD.

Dr. Judy Morgan, a holistic veterinarian in New Jersey, recommends using a natural product like apple cider vinegar instead of chemical products. Some chemicals found in commercial options not only affect your pet negatively, but can also affect humans who come in contact with the pet, said Dr. Morgan to Pet MD. While Dr. Morgan doesn’t recommend a natural alternative for all pets, she does recommend it for holistic patients who don’t respond well to medicated treatments.

To create an apple cider vinegar spray, simply add equal amounts of apple cider vinegar and water to a spray bottle. Spray the mixture directly on your pet, avoiding the eyes, when you notice fleas or before they go outside to discourage fleas at the outset. You may also use this mixture in your home if you notice fleas in your carpets or bedding. Just make sure to test a small area first for color fastness.

The kitten survived her ordeal but other cats have not been so lucky, reports the Dodo. Shortly after Teresa Crandall strapped a flea collar around the neck of her cat Onyx, he went through a terrifying transformation, experiencing blindness, seizures, paralysis and finally death.

Your cat may not be as sensitive as Onyx, but is it really worth the risk? Share this story to help save a cat’s life.