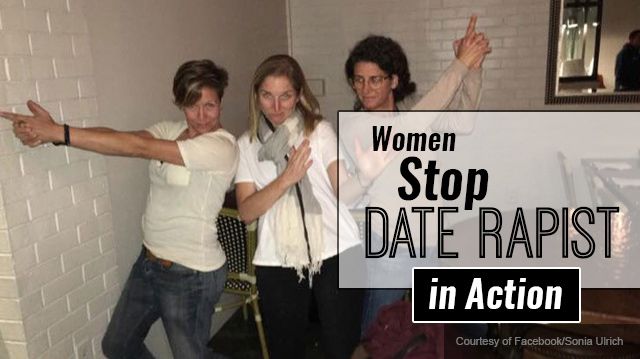 Three L.A.-area women were in the right place at the right time when they witnessed a crime about to unfold. Thanks to a keen eye for observation and quick thinking, they were able to stop a rape before it happened. We all need someone watching are back, but for one lucky woman — she had three!

They were witnessing an attempted rape

Sonia Ulrich, Marla Saltzer and Monica Kenyon were enjoying happy hour at a restaurant in Santa Monica, Calif. when Kenyon witnessed a man pouring a suspicious-looking substance into his date’s drink. The potential victim had stepped away to the bathroom.

“I was going on about something and saw Monica staring behind and making a funny face,” said Ulrich in a Facebook post that’s now gone viral. Kenyon said, “That guy just put something in her drink.”

The man allegedly emptied a vial into his date’s glass of wine, then pretended to look at his phone while putting it away. Ulrich realized that they were witnessing an attempted rape, and that they had to do something to stop it.

What are date-rape drugs?

Date-rape drugs, commonly known as roofies, are used to assist in sexual assault. These drugs are powerful and dangerous and can be slipped into your drink when you are not looking. The drugs often have no color, smell, or taste, making it hard to know you’ve been drugged.

Date-rape drugs make you weak and confused. They might make you pass out or cause you not to remember what took place. Their purpose is to disable a victim so that she can’t and won’t refuse sex or be able to defend herself. Both sexes can fall victim to date-rape drugs.

They had to warn her

Ulrich followed the woman into the bathroom to warn her about what she had just witnessed and then waited by the sinks until the woman came out of the bathroom stall.

“‘How well do you know that guy?’” Ulrich said. “I was expecting to hear ‘We just met…’” Instead Ulrich found out that the man was one of the victim’s closest friends.

Meanwhile, Saltzer and Kenyon spoke to the staff and the restaurant manager, who kept a watchful eye on the woman and gave her a sparkling water to drink. Because they did not witness the crime, there was not much else the staff could do. What must have been excruciating for the victim, she had to sit with her alleged rapist for another 40 minutes while he urged her to drink from the tainted wine glass.

While the couple finished dinner, the manager checked the security camera footage — catching the culprit red-handed. The police were dispatched and arrived as the couple waited for the bill.

The police said, “Come with us, and he doesn’t protest,” Ulrich wrote. “Doesn’t ask why. Doesn’t seem surprised.”

How to protect yourself

Roofies are serious business and very powerful. Not only do they affect you quickly and without your knowledge but when mixed with other drugs or alcohol can be even more intense, sometimes leading to serious health problems and even death.

There are some things you can do to protect yourself.

What makes this story even more appalling is that the man who apparently attempted to roofie his date was more than just a casual acquaintance to the victim. He was “one of her best friends.” In fact, “they had known each other for a year and a half, and even worked together.”