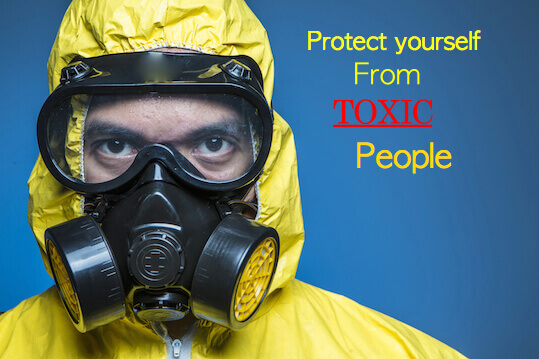 Did you know that some people are bad for your health? In fact, they can be downright toxic. Toxic people often leave you feeling wounded, drained, negative, or vulnerable after only a short time in their company. Here are ways to recognize toxic people and how to protect yourself from them.

You may come into contact with toxic people in the most unexpected places. They can be bosses, coworkers, friends, classmates, romantic partners, and even family members.

Telltale signs of interactions with toxic people are feelings of hurt, unhappiness, or defensiveness. Their methods of communication often include sarcasm, hurtful comments, bullying or belittling, and passive-aggressive tactics.

If you feel a sense of dread or unease about spending time around someone, chances are it’s because they are toxic. You may realize that some people have been toxic to you from the start, while others became that way gradually over time.

People can be toxic in many ways. These are the most common traits you’re likely to notice:

The victim: These toxic people never take responsibility for their problems. In their minds, everyone else is always to blame, and they are always the victim. When reviewing a situation, or telling the details to others, they will always do so in a way that fits this perspective and expect to be agreed with on how they see it.

The superior one: These toxic people suffer from a bloated sense of arrogance. Unlike simply being confident, these people truly feel they are superior to everyone else. They expect that their ideas will always be the best and often try to intimidate anyone who does not agree with them.

Green-eyed monster: Toxic people who are jealous will never celebrate or appreciate the blessings that are bestowed on others. When something positive happens to someone else, even if it was earned through hard work, they will still begrudge that it didn’t happen to them.

Control freak: People who want to control others often suffer from their own insecurity. They will need to have the last say in everything and will fight to make sure things go their way. You often won’t even be able to get a word in edgewise to express your own opinion when dealing with control freaks.

Mr./Mrs. Negativity: These negative people will suck the life right out of you. There is no joy, happiness, or appreciation that you can express in front of these toxic people without them having to rain negativity on your parade. In their eyes, everything is bad, unfair, unjust, etc. They are resentful, angry, and often suspicious in dealing with others.

The liar: These two-faced toxic individuals can never be believed. Because they lie all the time, you never know when they may be telling even a grain of truth. You cannot put faith into anything they say. They lie about others, and you should assume they also lie about you.

The gossip: Toxic people that gossip are downright destructive. They see no line between truth and speculation. They will tell all angles of a story because they believe it is all relevant, whether it is based on fact or not. They feel they are sharing vital information and have no regard for the privacy of others.

The judge: Judgmental people do not listen to facts or the feelings of others. Communication is not their strong point. Instead of listening to the details to understand things objectively, they jump to their own conclusions. They are harsh and critical of anything they do not understand or are unwilling to accept.

Protecting yourself from the toxic sludge

You do not have to allow these people to drain your energy, beat down your willpower, and leave you feeling ambushed. Here are some surefire ways to protect yourself from their toxic sludge:

Learn to recognize them

The first step in protecting yourself from toxic people is to learn how to identify them. Think about the people in your life with whom you have regular contact. Does the idea of spending time with any of them leave you filled with dread? Think about why they make you feel that way, and if they fit the description of a toxic personality type. Once you recognize the toxic sources in your life, you can start to protect yourself from them.

Instead of allowing yourself to get trapped at the mercy of your toxic friend, control the environment in which you are with them. Don’t invite them to your home where you will be stuck until they choose to leave. Instead, plan on going to an event together, so you know you will be able to leave after a reasonable time.

Try to keep the conversation light

It is a good bet that any time you spend with a toxic person will involve a lot of negative commentaries and subjects that are draining. Keep trying to change the topic with light-hearted subjects. If the person likes shoes, mention your favorite shoe store. If they like boats, talk about the marina in town. Try to find a topic they can feel positive about.

If you have a toxic person that continually fills your timeline with negative posts, simply block them. Or, if you find they are cyberstalking you to fill your messenger window with negative rants, then go invisible.

Don’t get involved in the negativity

Energy-sucking, toxic people love nothing better than to drag you into their complaining and negativity. They actually feed on the negative energy and you will find yourself drained by it. Instead, keep trying to offer positive solutions and comments. Chances are, they will be put off by it and end the interaction quickly. 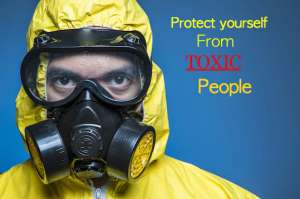 Do your best to not be alone with them

Particularly when dealing with toxic people who bully and intimidate, it is best to not be alone with them. If you must be around them, try to do so in groups of others who will help balance out the conversation and energy. More positive people like yourself can help keep a toxic person in check.

You could try the direct approach

This should be considered with caution as some toxic people may consider it confrontational. However, sometimes you have to put your foot down and say that some topics are off limits. By refusing to engage in conversations that make you feel uncomfortable or negative, the other person must change the subject or walk away.

Sometimes you have to say goodbye

If there is someone in your life that is so toxic that you can find nothing that works to make your time around them better, it may be time to say goodbye for good. When someone is constantly hurting you, making you doubt yourself, or feel badly about your life, it is an abusive relationship. Emotional abuse can have long-lasting effects and you need to end those relationships in order to protect yourself and heal.

Toxic people can be very good at intimidation and making you doubt yourself. You must take a stand and do what is best for you. Then make a point to spend your time with positive people that reinforce your good feelings.