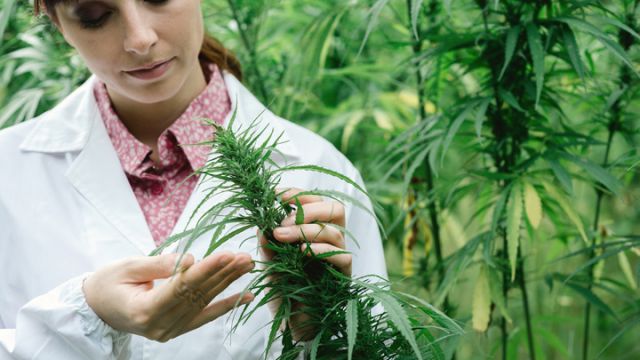 Imagine you’re the parents of a child with a life-threatening illness and the only way you can help them is to break the law. That’s the predicament Lenny and Amy Lopez find themselves in.  Their 5-year old boy, Isaias, has a form of epilepsy known as Dravet’s syndrome, which means he can have dozens of dangerous seizures every day.

Unfortunately, Isaias – like most epilepsy patients – has not found relief from traditional pharmaceuticals, which can have severely debilitating side effects. However, there is one treatment that has reduced both the frequency and severity of his epileptic episodes. It’s a extract known as CBD, which is derived from cannabis oil.

No, this is not the kind of “medical marijuana” that will get you high – since THC, the active ingredient that’s responsible for pot’s psychedelic effects, exists only in trace amounts in CBD. Nevertheless, many doctors and medical centers remain reluctant to investigate or prescribe cannabis-based treatments because the DEA still classifies marijuana as a Schedule I controlled substance, which presumes that it is among the most dangerous drugs out there, with a high potential for abuse and no possible medical value.

The federal government’s prohibition flies in the face of a growing body of both anecdotal and scientific evidence that show marijuana may have medical efficacy for a wide range of ailments.

For example, even the NIH recognizes that cannabinoid-based compounds are effective in treating nausea in patients with HIV and cancer. The institute also acknowledges that marijuana-based treatments show promise in controlling epileptic seizures, reducing inflammation and fighting tumors.

Increasingly, the efficacy of medical marijuana is gaining acceptance both in the medical community and among the public. For example, recent polls indicate that 85 percent of Americans now support the idea of allowing physicians to prescribe the drug for medicinal purposes.

In addition, worldwide more than 60 professional associations and medical organizations have come out in favor of recognizing or investigating marijuana as a legitimate therapeutic agent. Even the American Pediatrics Association, though not favoring legalization, supports expanding scientific research into the “use of cannabinoids for the relief of symptoms not currently ameliorated by existing legal drug formulations.”

Unfortunately, both doctors and patients are caught in a Catch-22. Some government agencies grudgingly acknowledge marijuana may have some legitimate medical benefits, but both Congress and the DEA have been unwilling to reclassify weed, which effectively hampers the kind of careful research that could help substantiate and clarify pot’s medical efficacy.

Dr. Elizabeth Thiele, who teaches neurology at Harvard University, captures this dilemma well. She believes CBD and marijuana extracts could represent a “breakthrough” for epilepsy patients, but she harbors a reluctance to prescribe the drug because she doesn’t understand how it works since the science has not yet been established.

In the meantime, many parents are taking matters into their own hands. A CNN Special Report with Dr. Sanjay Gupta followed the case of Charlotte Figi, a young girl who suffered 300 epileptic seizures a week until she was helped by CBD. The report has encouraged parents and doctors to look into cannabis oil as a treatment option. It has even prompted some politicians in both parties to support legislation that would allow children with epilepsy access to CBD.

Allowing patients to access CBD should be a no-brainer. After all, there’s no THC in CBD, so patients are not getting high. However, in some instances “cannabis oil” may not be sufficient for many patients. That’s because marijuana contains roughly 400 chemicals and each strain of the plant has its own genetic identity.

Many researchers now believe marijuana’s medicinal effectiveness is due to a so-called “entourage effect,” which involves a synergy between all the various compounds in the plant. The bottom-line, allowing CBD is an important development, but it should not distract the medical community from investigating the therapeutic potential of non-synthetic forms of marijuana.

Plant-based strains with active THC may not be an ideal way to deliver therapeutic benefits, particularly when kids are involved, but it may be the best alternative available. After all, for parents confronted with epilepsy on a daily basis, the choice can be clear – every seizure is potentially life-threatening, but there is not one documented case of a fatal marijuana overdose in the medical literature.

Presently, 25 states and the District of Columbia allow some form of medical marijuana. Tragically, the patchwork quilt of state solutions leaves lots of patients in a quandary. For instance, many parents do not live in a state where their kids can receive treatment with CBD. Second, many state laws expressly prohibit transporting cannabinoid-type oils across state lines. And finally, despite state-level reforms, cannabis in all its forms remains illegal under federal law.

At present, the DEA is looking into reclassifying marijuana as a Schedule 2 drug. This wouldn’t legalize it, but it would allow researchers and scientists to acquire the plant so that it can be studied and tested.

However, the DEA’s decision has already been delayed and there is no word when that reassessment may come, though some observers believe it may come just before Obama leaves office.

In the meantime, parents like Lenny and Amy Lopez are taking matters into their own hands. They are doing what any parent would do. They will worry about the welfare of their child first; the law will be a secondary consideration.