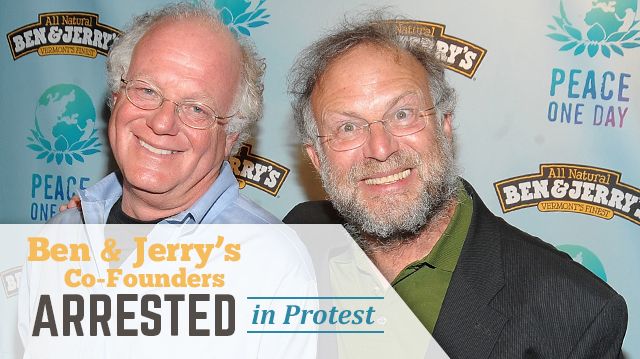 The co-founders of Ben & Jerry’s Ice Cream were arrested Monday, April 18, but not for what you probably think. The pair were just two of the 300 protesters who were arrested after they came together at the U.S. Capitol Building for the Democracy Awakening protests.

Ben Cohen and Jerry Greenfield are no strangers to politics. Cohen recently created 40 pints of an ice cream flavor named “Bernie’s Yearning” in honor of presidential candidate Bernie Sanders. He also participated in Sanders’ campaign launch in Burlington, Vermont, and has remained an outspoken supporter.

“This is good,” said Sanders when he tasted the ice cream named in his honor while on The View. “Excellent, really good. I’m not just saying that because it’s ‘Bernie’s Yearning.’ ”

The mint ice cream is topped with a giant chocolate chip that “represents all the wealth that’s gone to the top one percent of the population over the past 10 years,” Cohen told CNN’s Carol Costello in October 2015. “And the way you eat it is that you whack it with your spoon, then you mix it around. That’s the ‘Bernie’s Yearning.’” We’re all for combining delicious treats with a meaningful message.

Despite Cohen’s support of Sanders, Democracy Awakening — part of the Democracy Spring protests that occurred earlier this month — is not affiliated with any particular candidate or party.

“American democracy is premised on the fundamental tenet, ‘one person, one vote,’” says the Democracy Awakening 2016 website. “But since the very beginning, we’ve had to fight for every voice to be heard and every vote to be counted.”

Earlier this April, more than 400 Democracy Spring protesters were arrested for a sit-in at the US Capitol Building. Demonstrators marched for nearly 150 miles from Philadelphia to Washington D.C. in an effort to “draw attention to our corrupt campaign finance system and rigged voting laws,” according to the Progressive Change Campaign Committee (PCCC).

This week, US Capitol Police issued a statement that said Democracy Awakening protesters were arrested on April 18 for unlawful demonstration activities, and according to CNN, the 300 protesters were “processed on the scene and released.”

Ben & Jerry’s posted on their website about the event:

“When our co-founders were arrested on Monday on the steps of the capitol, they were among hundreds of passionate activists who knew, and know, that the movement to ensure the right of every citizen to vote and to get big money out of politics has only just begun.”

“Democracy Awakening may be over, but the thousands of supporters who came to the nation’s capitol will be returning to their homes and communities inspired and even more hopeful than they were before that together we can build a fairer, more inclusive democracy.”

According to the website, Ben & Jerry’s employees were on hand scooping ice cream “until there was no more ice cream to scoop,” and some even carried signs with an ice cream motif and text written in Ben & Jerry’s iconic font.

Regardless of your political leanings or your beliefs, Ben & Jerry said it best, “It all comes down to a simple idea that we believe in wholeheartedly: if you care about something, you have to be willing to risk it all — your reputation, your values, your business — for the greater good.”

We can’t help but wonder if Cohen and Greenfield will be arrested at another protest before election day. It seems they’re in it for the long haul. Maybe they’ll even distribute some of that Bernie’s Yearning goodness while they’re at it. We can only hope!