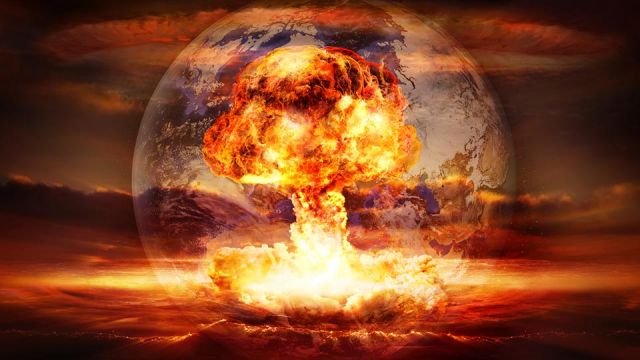 If you’re stickler for punctuality, then you’re not going to like this one: turns out the end of the world is running a bit late. That’s right, conspiracy theorist and self-proclaimed expert-on-your-imminent-fiery-death David Meade says the world is going to end next month, not last weekend as some of his followers assumed.

The Alternative Daily previously covered Meade’s claims, back when he had set the date for the apocalypse as September 23. Technically, this is the second time Meade’s followers have found themselves with a bit of extra free time up their sleeves before the lakes of fire engulf them. Originally, Meade had put the end of the world a few days earlier on September 21, but revised his predictions after the August 21 solar eclipse apparently messed things up.

Either way, Meade considered September to be the month we’d all be dragged screaming in agony into eternal suffering, based on precise calculations of complex numerical codes hidden in the Bible. Specifically, his September deadline was based on Luke 21: 25 to 26, which states, “There will be signs in the sun, moon and stars.”

“On the earth, nations will be in anguish and perplexity at the roaring and tossing of the sea. People will faint from terror, apprehensive of what is coming on the world, for the heavenly bodies will be shaken.”

Cross-reference these passages with the pyramids of Giza and the timing of the August 21 eclipse, and Meade said he was able to predict an astronomical event that would end the world as we know it in September. Meade has also said a conspiratorial planet, Planet X or Nibiru, will almost hit the earth and pretty much ruin everyone’s day.

One of Meade’s videos on the topic went viral, leaving many believers convinced October wasn’t going to arrive.

Meade has since argued his prophecy was simply misunderstood, and September’s astronomical event was “a spiritual sign only.”

“We’re all watching for the September 23 sign because we know it means the end of the “Church Age,” he said in a statement posted on his website. Specifically, that sign was supposed to involve the sun, moon and Jupiter lining up with the constellation Virgo. Combined with another astrological event involving Mercury, Venus, Mars and Leo, Meade has argued late September was a time of extremely rare planetary movements.

Even fellow conspiracy theorists have criticized Meade, with flat Earth creationist Jonathan Sarfati arguing Meade’s astrological event has already happened four times over the past millennium. “As usual with any astrology (or Christian adaptations of it), one cherry-picks the stars that fit the desired conclusion,” Sarfati told the U.K.’s Express.

“There is nothing to suggest that 23 September is a momentous date for biblical prophecy, and Christians need to be careful about being drawn into such sensationalist claims,” he added. Nonetheless, Meade has maintained his event not only happened, but was “huge.”

According to Meade, September 23 was the start of the apocalypse, and not the date of Nibiru’s arrival. In all fairness, Meade has been consistent on this point. Now, according to Meade, we’re in for the worst month ever. October will be the first month of seven years of everyone being terrible. Speaking to The Sun, he explained that as early as October 21, we could see “nuclear exchanges between the U.S., Britain and our enemies — Russia, China, Iran and North Korea.”

“Rioting and looting will be unrestrained… society will be in chaos,” he said, explaining how massive solar flares will bring down the electrical grid. “It will involve cataclysmic climate events related to Planet X or Wormwood — those are the trumpet judgments of Revelation,” he said.

While Planet X is a planet that will supposedly come close to colliding with Earth, Wormwood is an asteroid that’s “on close approach to the earth sometime during the Tribulation.”

Both Nibiru and possibly Wormwood will cause the Earth to act really weird. “Volcanoes all over the Earth will erupt along with multiple high magnitude earthquakes, tidal waves and a meteor firestorm. Volcanic ash will be released,” Meade’s website explains. According to Meade, the end result “could be the greatest catastrophic infliction of loss of life upon mankind, since Noah’s Ark.”

However, before you get too worried, it’s worth noting that there are no celestial bodies on a (near) collision course with Earth — at least, none that are anywhere close to us right now. Veteran debunker and NASA space scientist David Morrison has been critiquing the Nibiru conspiracy for years, and has argued any such planet would be visible to the naked eye long before it hit us. “If it were up there, you could see it. All of us could see it,” he said in a 2012 video debunking a similar Nibiru conspiracy.

“If Nibiru were real and it was a planet with a substantial mass, then it would already be perturbing the orbits of Mars and Earth. We would see changes in those orbits due to this rogue object coming into the inner solar system,” he said.

“Instead, in the inner solar system, we see planets with stable orbits,” Morrison said. “We see the moon going around the Earth.”

In fact, the Nibiru conspiracy has been around for decades, with various theorists predicting its arrival over and over again. In 1995, Nibiru believer Nancy Lieder caused an early internet sensation when she said aliens from the Zeta Reticuli star system had warned her the planet would wipe out humanity in 2003. However, Nibiru goes even further back than that, with Russian-American ancient aliens proponent Zecharia Sitchin writing about the mythical planet in the 1970s. Most modern Nibiru conspiracies include themes featured in Sitchin’s writings, such as the idea that the mysterious planet somehow only visits the inner solar system every few thousand — or a million — years.

As for the Wormwood asteroid theory, NASA says we likewise have nothing to worry about. “Today NASA astronomers are carrying out a survey called the Spaceguard Survey to find any large near-Earth asteroids long before they hit. We have already determined that there are no threatening asteroids as large as the one that killed the dinosaurs,” the agency has stated on its website.

Despite not existing, Nibiru and Wormwood may have already done some harm here on Earth, at least for one unlucky man who happens to share Meade’s name. “It is deeply worrying to think that this nonsense could be there online and could affect my business,” British mentalist David Meade told the BBC.

British Meade lamented that internet users seem to be confusing him with the conspiracy-loving American who shares his exact name, and says his website is constantly crashing from the sudden explosion of traffic.

“When people were arriving on my site they were seeing things like ‘mentalist’, ‘mind reader.’ That probably sounds like the sort of person that would predict the end of the world,” he said.

However, he assured the BBC he isn’t related to the other Meade. “A Fox news anchor linked directly to my Twitter feed, directly to my website, and, to date, has refused to apologize for it,” he said. “My main concern is that no one seems bothered to correct this.”

As the supposed end of the world approached, Meade said he was even inundated with death threats, and is “still getting hundreds of threatening messages to my site every day.”

It should go without saying, but there’s no excuse for threatening to kill anyone — unless, perhaps, you’re a giant planetary body hurtling towards Earth.