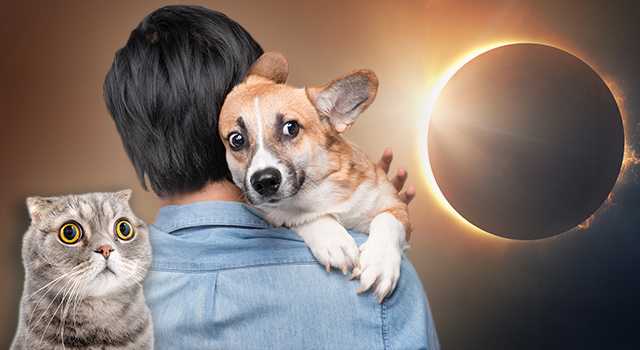 It’s not just us humans who can go a bit crazy during eclipses — animals can be affected too. On August 21, the United States will witness its first total eclipse in a century, bathing much of the country in an eerie twilight. Dubbed the Great American Eclipse, it’s already being hailed as the biggest astronomical event of the decade, and a once-in-a-lifetime opportunity for most of us.

However, some of our furry friends might not be so happy with this unusual natural phenomenon. So how will the eclipse affect your pets?

Dogs are among the most affected household animals during eclipses. During a major eclipse in 1932, the Boston Society of Natural History recorded data suggesting around half the nation’s pet dogs were emotionally affected. For most dogs, this meant they became quite frightened, though some terrified pups went as far as trying to hide from the eclipse. So, during the eclipse, give your dog a little extra love and take measures to ensure they don’t try to run away. If you head outside, keep your dog on a leash.

Unlike dogs, cats are known to keep their cool during eclipses. Research from the 1970s found most cats simply took the opportunity to have a nap, while a few meowed in confusion. Generally though, you can expect your cat to be just fine.

For at least a century, we’ve known birds hate eclipses. In the 1932 eclipse, there were reports nationwide of birds stopping their singing, with many appearing visibly shaken. As anyone who keeps birds knows, they can be sensitive animals at the best of times, so you should do everything you can to shelter your feathered buddy from the phenomenon.

Like cats, rabbits are known to remain calm during eclipses. If you keep any bunnies, expect them to turn in early on August 21, and snuggle up for a sleep.

An unusual pet perhaps, spiders can be fascinating to watch during eclipses. During a 1991 eclipse in Mexico, researchers noted some species seemed to totally lose their minds, destroying their own webs and just generally acting weird. So if you’re a spider owner, your eight-legged companions might have some surprises for you on August 21.

Because of the lack of solid data on how animals react to eclipses, it’s hard to say how other pets will handle the phenomenon. There’s anecdotal evidence that nocturnal animals will suddenly become active, so expect your frogs to get singing. Primates often have unusual reactions, ranging from fear to curiosity. If you’re interested in seeing how other animals react, consider visiting a zoo during the eclipse. It could be a unique experience.

1. Eclipses can cause the moon to go into thermal shock

A solar eclipse doesn’t just affect us on Earth; it can also rattle the moon. According to NASA, the sudden drop in lunar temperatures during an eclipse can dislodge lunar rocks, and even force gas to vent from deep inside the moon’s darkest recesses. To give you an idea of the temperature changes we’re talking about here, during a 1971 eclipse, NASA recorded a drop from 168.3 degrees Fahrenheit (75.7 degrees Celsius) to -53 degrees Fahrenheit (-1021 C). That’s a 321.3-degree change in just a matter of minutes.

2. Eclipses can cause huge food waste in India

In India, there’s a widespread myth that food can become poisonous during an eclipse. For this reason, many people in India refuse to eat during this phenomenon, and households have even been known to throw away anything uneaten that may be sitting around the house.

3. Eclipses can last much longer than you think

It’s commonly believed that eclipses only last a minute or two. While it’s true that this year’s eclipse is predicted to end after barely two minutes, the longest ever recorded lasted for seven minutes and 30 seconds.

There’s no shortage of conspiracy theories surrounding eclipses, including that they’re linked to natural disasters like earthquakes. There’s actually some evidence to suggest they are indeed linked to quakes, but not in the way you might think. According to the University of Chicago’s astronomer Geza Gyuk, it’s possible eclipses could cause quakes on the moon. However, Gyuk has emphasized the evidence for this remains extremely limited, and more research is needed.

Solar power is a beautiful thing, but the occasional eclipse can have a massive impact on environmentally friendly electricity. In 2015, Europe lost an estimated 35,000 megawatts of solar energy due to a single eclipse. So, if you have solar panels on your roof, August 21 might be an expensive day.

This last one is less of a fact, but it’s fascinating nonetheless. There’s a common belief in Italy that any flower planted during a solar eclipse will grow to be extraordinarily vibrant. While there’s no solid scientific evidence backing this up, it couldn’t hurt to try, right? We’d love to hear from any gardeners who give this a shot — you never know what could happen.

Got any eclipse facts of your own? Share them with us in the comments!