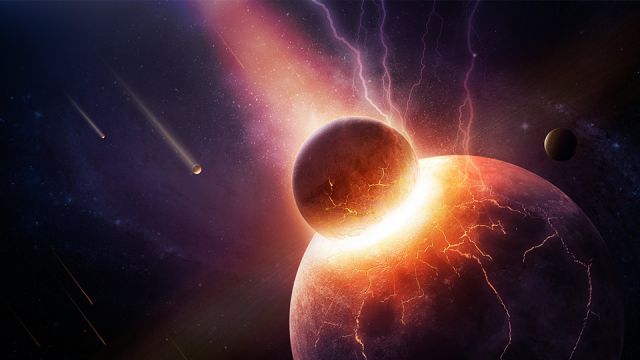 In a world where major hurricanes and massive earthquakes are becoming increasingly commonplace, is this new end of the world theory really that difficult to believe? David Maede, an author of end-of-the-world survival guides and a devout Christian, predicts that the end is near. In fact, it’s as near as this Saturday.

Maede’s latest theory predicts that this Saturday, September 23, “Planet X” will collide with Earth, creating an apocalypse. He even released an entire book on the subject called “Planet X-The 2017 Arrival.”

Originally, Maede thought the world would end a few days sooner, but due to the solar eclipse on August 21, he changed his prediction to this Saturday. In his recent book, Maede strongly argues that his claims of this apocalypse are based upon biblical history, especially with the fact that it occurs 33 days after the total solar eclipse. “Jesus lived for 33 years. The name Elohim, which is the name of God to the Jews, was mentioned 33 times (in the Bible),” says Maede. “It’s a very biblically significant, numerologically significant number.”

Also in his book, he cites passages from the Book of Luke that say the rogue planet Nibiru, or Planet X, will hit Earth. As a result of the intense impact, the world will end due to tsunamis and earthquakes, which is a little startling considering there have been four major earthquakes around the globe in the past couple of days.

Major earthquakes in the past 36 hours:

Believers of the conspiracy theory say that Nibiru will be visible on September 23, but fortunately, Earth won’t be completely obliterated until October. Maede has been able to stir up so much conversation around his theory that even NASA has responded.

NASA says that Maede’s predictions are a complete hoax. “If Nibiru or Planet X were real and headed for an encounter with the Earth… astronomers would have been tracking it for at least the past decade, and it would be visible by now to the naked eye.”

Others are poking some fun with this theory, like this Canadian radio producer, Robyn Flynn.

Just tried to book an interview w/ a researcher who says the world ends Saturday. Told me he’s not available for interviews until next week.

There have been thousands of debunked claims of Nibiru’s existence, most notably the 2012 phenomenon. What are your thoughts on this theory? Let us know in the comments!