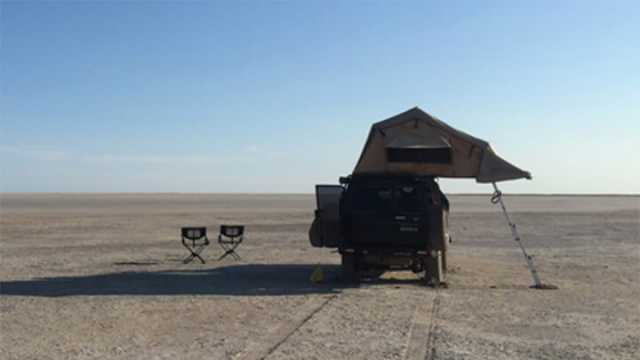 Ever dreamt of leaving it all behind, traveling the globe and maybe doing a little charity work along the way? While that may seem like a pipe dream for many, one adventurous couple decided to do just that. And here’s what happened.

Some days it’s hard not to feel like you’re trapped in a life of monotonous routine. When that happens, it can leave you yearning for a little adventure. Newlyweds James and Mira Raley often romanticized about a big trip. They and agreed that Africa was the continent that intrigued them the most. But like many young couples, they felt the idea was something of a pipe dream. And, of course, trips to Africa don’t come cheap.

“I had assumed our aspirations would never materialize due to my need for financial security and career progression,” James told the Telegraph.

But then things changed. Mira, James soon-to-be wife, sent out a wedding gift list that included adventurous activities in Africa. And that sealed their fate, said James.

However, there was still a lot of planning required to organize such a trip. In fact, before the newlyweds could set off on their adventure, it took them nine months between their wedding day and the start of the journey to plan their getaway. In total, they planned and organized travel arrangements for 18 months.

Preparing their vehicle used up most of the time and money, wrote the Raley’s on their blog The Honey Badger Diaries. And a lot of planning came down to guesswork, combined with what they learned from on the internet.

The adventure began in Mombasa, Kenya and continued for one year. Along the way, they sat with friendly gelada baboons in the Simien Mountains. They witnessed the great migration in the Masai Mara and climbed Kilimanjaro, according to their blog. But the adventure didn’t end there. They even conceived their son in a remote campsite in Botswana, as told to the Telegraph.

But this trip was more than just an extended honeymoon. The Raley’s also planned to give a little something back along the way to the people and environment that nurtured their adventure.

During their trek, James and Mira offered their support to several causes. These included helping at a local community village nursery school in Zanzibar and volunteering their time at the ground-breaking African Lion Rehabilitation Program in Zimbabwe.

For their trip, they raised more than $18,000 on “GoFundMe” to support their mission. They have also donated more than $2,200 to the Midlands Children’s Hope Center to build a new orphanage in Zimbabwe for street kids in dire need of a new home.

“We’d like to get that total to $50,000,” Mira tells the Telegraph, “because we see that as a fitting legacy for our adventure.”

Would you give it all up?

For some, packing up your bags and traveling the globe sounds like a dream come true. But for others, the thought of living out of your suitcase can be wearisome, lonely and even a bit scary. For the Raley’s it was the former. So, what about you — could you give it all up for the love of adventure?

As Mark Twain once said, “Twenty years from now you will be more disappointed by the things that you didn’t do than by the ones you did do. So, throw off the bowlines. Sail away from the safe harbor. Catch the trade winds in your sails. Explore. Dream. Discover.” Perhaps we could all do a little more of that — especially for a good cause.