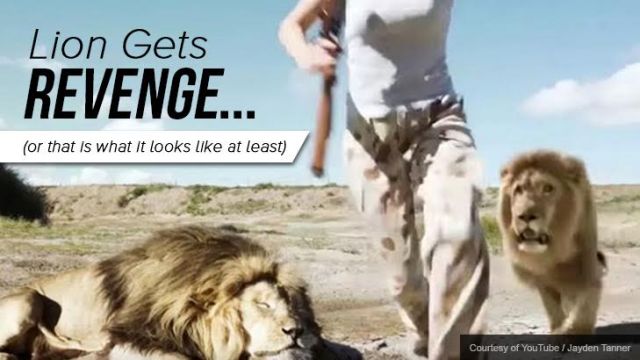 Each year, foreign hunters export the carcasses of more than 600 wild lions from Africa. Now it appears that one of those majestic beasts has exacted revenge — or has it? The jury is out, but the video is nevertheless shocking, and it suggests an important conversation about wildlife should be taking place.

In a video uploaded by YouTube user Jayden Taner, a couple of hunters appear to become the hunted when a ferocious lion chases them down while they pose over the carcass of a dead lion. Scores of viewers are already calling it a fake.

The footage includes a hunter holding a gun and her companion, who might be another hunter or her driver. The couple chat with each other and pose for the camera, ostensibly to take a picture. You can’t help but wonder why they would be taking a video and a still picture at the same time, but that’s the gist of it.

The pair in khaki definitely seem to know each other, but their interaction is hardly comfortable and resembles something one might see on the amateur stage. The scary part — if the video is real — is when the man walks up to the camera to adjust it. The next thing you now, the woman screams and starts running toward the camera: Another huge male lion is chasing her.

The pair knock the camera over as the lion follows the alleged hunter into or over a vehicle — it’s hard to tell which. It’s uncertain what happens next, but there are a couple of shots fired off-screen before the lion casually walks back into the frame.

The caption below the video reads: “I managed to get my hands on this video when I was in South Africa a couple of months ago, a hunter showed me and thought it was hilarious. For me this video highlights a distressing situation that the world needs to see.” He goes on to talk about the thousands of exotic animals killed each year by trophy hunters. The video is tagged #stoptrophyhunting.

Although the hashtag is popular on both Twitter and Instagram, there’s little mention of this video. However, trophy hunting is a controversial subject and this video — even if it is fake — brings the subject to viewers’ minds and keeps the conversation going.

Lions are among the “Big Five” of Africa’s most sought-after trophy animals, according to the International Union for Conservation of Nature’s “red list” as of last year. Hunters will pay anywhere from $8,000 to in excess of $50,000 for the chance to hunt them.

What do you think of the trophy hunting of wild animals?