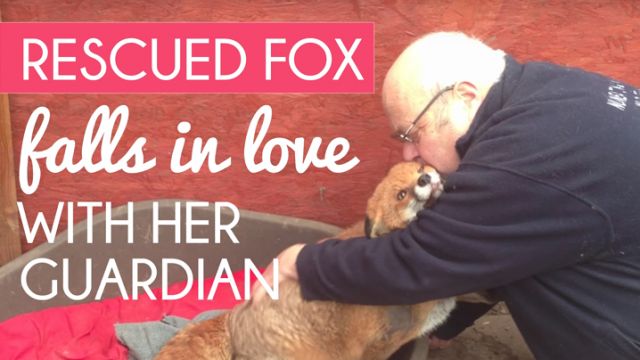 While most foxes are wild and independent, sometimes after an injury they can become reliant on humans. So much so, in fact, that the human may become indistinguishable from the fox’s domesticated cousins. Such is the story with Dawn.

A fox who thinks she’s a dog

Dawn is one of Nuneaton and Warwickshire Wildlife Sanctuary’s six resident foxes that can’t return to the wild. Originally, she was taken into a dog rescue center because she was thought to be a dog. When they realized she was actually a fox, she was brought to the wildlife sanctuary for rehabilitation. Unfortunately, it was too late for Dawn to return to the wild. She was too tame, which meant she would surely die outside the sanctuary.

In the wild foxes live one to five years, but in captivity they can live up to 14 years. That doesn’t mean they should be taken out of the wild and treated as pets, however. Dawn along with the other foxes at the wildlife sanctuary are exceptions to the rule.

Dawn has fallen in love with Geoff the security manager at the sanctuary, and can’t seem to get enough of his cuddles. This video was filmed back in 2013, but hopefully Dawn is still being snuggled by Geoff whenever she needs love.

What to do with injured wild animals

It’s not uncommon to find baby wild animal wandering around during spring. While it might seem like they need your help, they probably don’t. Unless the animal is physically injured, there is no need to rescue it. These tips from the Humane Society can help you decide whether to take immediate action:

If you are sure the animal needs your help, call a wildlife rehabilitator for assistance or try contacting an animal shelter, the humane society, animal control, a nature center, your state wildlife agency or your local vet.  Make sure to get instructions on how to capture and contain the animal. But be cautious, wild animals can scratch and bite when frightened, particularly if they are injured.

Remember: even though wild animals (like baby foxes) are cute, they aren’t meant to be pets. Unless they’re injured, leave them in the wild.