It seems like a fact of life: As we age, we often “fill out” more than we’d like, and by “fill out,” you know what we really mean. Many adults develop a so-called “spare tire,” or an extra roll of fat around the middle. While we may want to shed those extra pounds for cosmetic reasons, we should also consider doing so for our health. According to a new study, people with extra fat right around the middle have an even higher mortality rate than people who are obese.

The study, conducted by an integrated team of researchers from the Mayo Clinic, St. Anne’s University Hospital in the Czech Republic, and the University of Ottawa Heart Institute, was published in the Annals of Internal Medicine. It investigated the relationship between mortality and central obesity, and found that “persons with normal weight central obesity had the worst long-term survival.” Central obesity, according to Harvard Medical School, is excess body fat in the abdominal region.

Abdominal fat comes in two forms: subcutaneous fat just under the skin, and visceral fat that is located around the internal organs. It is the visceral abdominal fat that poses a higher risk of disease for people, especially those who are of normal weight who develop a spare tire. Although scientists still haven’t figured out exactly why abdominal fat is so harmful, they do have some clues.

Initially, scientists believed the location of visceral fat — the fat around the organs — was “linked to over-activity of the body’s stress response mechanisms, which raise blood pressure, blood sugar levels and cardiac risk.” However, more recent evidence points to lipotoxicity, or toxic fat. According to Harvard Medical School, “Visceral fat cells release their metabolic products directly into the portal circulation, which carries blood straight to the liver.” Many of us have heard of a fatty liver, and there’s some evidence to show that visceral fat contributes to an enlarged liver, resulting in dysfunctional blood sugar and insulin regulation, high cholesterol and heart problems. 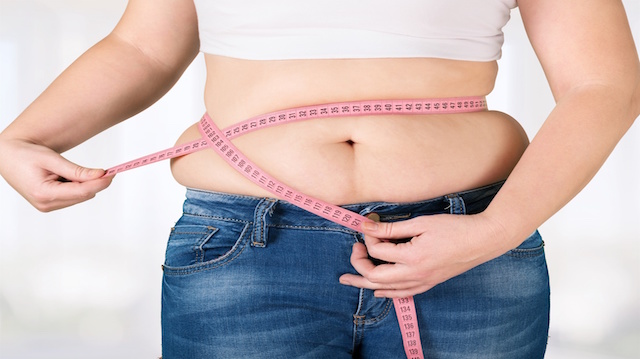 The most recent study into central fat involved analyzing data from around 15,000 individuals between the ages of 18 and 90 years old. Of the subjects, 52.3 percent were women. Using proportional models of measurement, scientists evaluated the relationship between obesity — measured using waist-to-hip ratio and BMI measurements — and total mortality risk. They found that people who were within “normal” size measurements everywhere except around their middle were far more likely to die from a cardiovascular or weight-related condition than even obese individuals.

Dr. Francisco Lopez-Jimenez, the lead author of the study and a cardiologist at the Mayo Clinic, noted that this surprising result is likely due to the fact that “normal-sized” people are less active. “Because their weight is normal, they don’t have to do anything else, and they may be less likely to exercise, to go out and be active and to eat a healthy diet,” said Lopez-Jimenez.

One of the reasons belly fat may be more dangerous than other types of fat is that visceral fat puts unnecessary pressure on the internal organs, according to Lopez-Jimenez. This pressure in turn requires organs to work harder to get the same job done.

So the take home lesson from this story seems to be that we all need physical activity in our lives. Even those of us who are a “normal” weight should be getting exercise a few times a week. Eating a healthful diet and engaging in stress-relieving practices are also important. As this study shows, extra weight around the middle could be more dangerous than we thought.

Are you surprised by this study’s results?