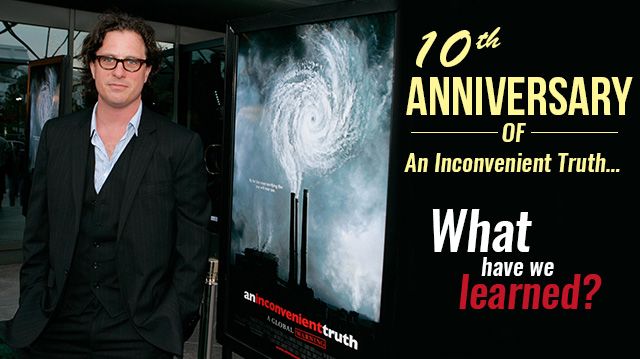 The Greek goddess Cassandra was blessed with the gift of prophecy, but she was also cursed because few believed the dangers she foretold. A similar fate sometimes seems to bedevil Al Gore, the former vice-president and Oscar-winning filmmaker behind An Inconvenient Truth. More than any other political figure, he has raised awareness of the perils of climate change, but he has also been mercilessly ridiculed by political opponents and special interests for his ecological views.

Tuesday, May 24, 2016, marks the 10th anniversary of Gore’s award-winning documentary. To celebrate the occasion, Paramount is making the film available as a free download at numerous sites including, Amazon, iTunes,  XFINITY and other digital retailers.

It’s been a decade since An Inconvenient Truth hit theaters — a fitting time, perhaps, to assess film’s impact and take stock of where humanity stands when it comes to climate change.

On the scientific front, Al Gore’s central message seems more prescient than ever. Evidence — in the form of record-setting temperatures, melting glaciers and rising sea levels — is accumulating on a daily basis. However, the film has played a role in prompting many countries to take action. For instance, recently world leaders signed a treaty in Paris to reduce carbon emissions. Other hopeful signs include declining coal consumption in the US and increased interest and investment in solar panels across the globe.

There are also reasons to be concerned. The former vice president is certainly worried that the election of the Republican front-runner, Donald Trump, would represent a serious setback when it comes to climate change. For instance, the real-estate tycoon recently tweeted that global warming is nothing but a hoax perpetrated by the Chinese to make US manufacturing uncompetitive.

Not surprisingly, Gore’s outlook has had an impact on the Democratic candidates. Bernie Sanders, for instance, has gone on record by saying that climate change “is the single greatest threat to our planet.” In particular, the senator from Vermont proposes transitioning to an economy that is 80 percent clean energy in the next 35 years.

The belief that global warming is real and caused by human activity still depends a great deal on party affiliation. However, Gore maintains that he’s made progress with some odd political bedfellows — more specifically, ecologically minded members of the so-called Tea Party movement. The former VP refers to his new allies as the “Green Tea Party.”

Ten years ago, Gore’s critics seized on inconsistencies in his personal energy consumption habits in an effort to discredit his message about global warming. Nowadays, the former vice president is “walking the walk,” so to speak — his house runs on 100 percent renewable energy.

In retrospect, one of the most enduring legacies of An Inconvenient Truth is that it instigated a debate that encouraged an increasing number of the globe’s citizens to see climate change as a real and growing threat that affects us all. As a result, more and more individuals, organizations and governments are taking steps to reduce their carbon footprint.