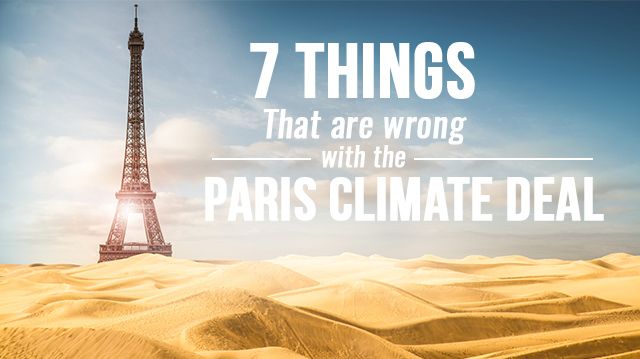 The Paris Climate Agreement has been hailed by some as a significant diplomatic success, while others see it as nothing more than a series of promises with no guarantee that significant action will result. Unfortunately, it will be at least five years before any of us know which side is correct.

Let’s take a look at some of the problems with the Paris Climate Agreement that many feel will hamper its success.

The main point of discontent that many have with the Paris Climate Agreement is that there is no mechanism for enforcement. There are no penalties, financial or otherwise, for a country failing to meet its intended emission reduction commitments.

What this means is that the only real penalty for a country failing to meet its commitments is that its representatives may encounter disappointed faces from other diplomats when reporting their results five years down the line.

The UN assistant secretary-general on climate change, Janos Pasztor, let the media know that even a public shaming of noncompliant countries is off the table. Pasztor said that the enforcement method used by the UN will not be a “name and shame” process but instead a “name and encourage” approach. According to Pasztor then, the only real consequence of failing to meet emission reduction targets is a “pep talk” from the international community.

“You can do it China! You can lower your emissions!”

The agreement commits the international community to keeping the post-industrial warming of the planet to “well below 2 degrees, and approaching 1.5 degrees.” However, the emission reduction promises that have been made would still allow a warming of 2.7 degrees by the year 2100. A fact that led author Naomi Klein to refer to the agreement as “woefully inadequate” and compared it to “eating 4 hamburgers a day instead of 5.”

Reporting not due for five years

Under the Paris Climate Agreement, countries won’t have to report their reductions in emissions until COP26, which is in five years. While changes in policy, industry and society do take long stretches of time to occur, many feel that five years is too long of a wait for something that is generally thought to be a time-sensitive issue.

To put this in perspective, consider that by the time any country has to report on their emission reductions, the summer Olympics will have occurred twice, Star Wars episodes 8 and 9 will both have been released, and President Trump may very well be in his second term.

The Paris Agreement allows countries to set their own emission reduction targets, which has led to more than a few unambitious commitments.

India, the world’s fourth-largest carbon emitter, will only commit to a reduction in emissions intensity per unit GDP, and countries such as Canada, New Zealand and Japan have made commitments that critics argue fall short of being a fair and proportional contribution to global efforts.

Russia has promised that they will increase their emissions, and that is somehow considered acceptable as well.

Government signatories may not be those who implement changes

Consider the case of Canada and the Kyoto Protocol. The Liberal Canadian government signed and ratified Kyoto, but was defeated in the next election after running on a platform that involved a carbon tax. The new Conservative government then withdrew from Kyoto and blamed the previous government for having made commitments that the country was not prepared to live up to.

One of the more pressing concerns regarding our changing planet is the displacement of people, either through rising sea levels, or the increase in extreme weather patterns leaving some areas uninhabitable.

Early negotiations involved developing strategies on how to deal with climate refugees, but were left out of the final agreement after opposition from Australia, a country with a historic tradition of receiving a large influx of people who arrived involuntarily.

In Paris it was agreed that wealthy nations are to contribute $100 billion to the Green Climate Fund to help developing countries adapt to climate change and develop fossil-fuel free energy.

But, similar to the strategy around emission reductions, how much a country contributes is voluntary and self-determined. The idea that each country will determine how much they contribute but that the final result will be $100 billion seems problematic.

This might very well play out similar to how eating at a restaurant with a large group of friends sometimes does. When it comes time to pay the bill, Brazil doesn’t want to contribute as much because it didn’t have any appetizers, Canada conveniently went to the bathroom, and China points out that it didn’t even arrive at the restaurant until dessert was being served and thus has not played as much of a historically significant role in the meal.

None of this is to say that there isn’t value to the Paris Climate Agreement, but it is a series of promises and not a plan for action.

In democratically elected countries, the degree to which governments live up to their promises will depend on the will of the people they represent. For people living in such countries, this means that one of the most productive actions they can take is to let their governments, parties, and politicians know that their vote will be determined by who they feel is most likely to take action on climate change.

Ian Carey is a writer with a focus on environmental issues, self-development and philosophy. A graduate of the University of Toronto, Ian has worked with Greenpeace, Environmental Defence Canada, and was an NGO representative at COP16 and COP17. When not writing Ian can be found enjoying life on the beach, softball diamond or hiking trails