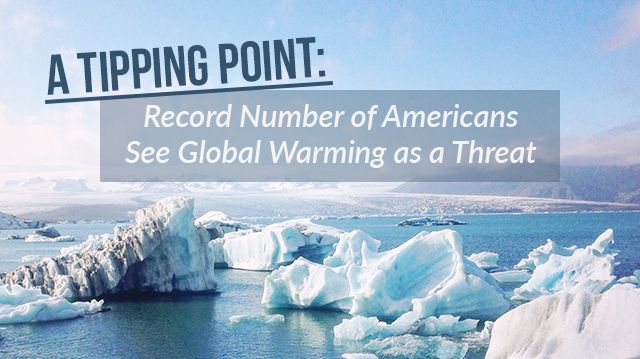 Forty-one percent of us are worried that global warming poses a “serious threat” to our lives. That’s according to a recent poll from Gallup. With such evidence, will politicians begin to take notice?

Gallup’s most recent poll on the subject — taken March 2 through March 6 — shows a 4 percent increase over last year’s global warming concerns. In fact, 64 percent of people polled said that they are worried a “great deal” or a “fair amount” about global warming.

Nearly 60 percent of people polled also believe that the effects of global warming have already begun, and that’s up from 55 percent in March 2015. Others believe that we haven’t seen the effects yet, but we will soon. Only about 10 percent say that effects of global warming will never happen. As crazy high as one in 10 people may sound to the rest of us, that number is actually down sharply from last year.

As Sen. Ted Cruz (R-Texas) gains on GOP frontrunner Donald Trump, we can’t help but wonder if a Cruz presidency would listen to these concerns. More than any other current candidate, Cruz’s denial of climate change is so steeped in fact-free opinion that it’s hilarious, but climate change is no laughing matter.

There are quite a few actual scientists who would disagree with him, and have.

Hillary Clinton and Donald Trump aren’t much better. Activist Naomi Klein said, “I don’t trust [Clinton] on climate at all. As Secretary of State, when she had a huge megaphone to make this an issue, to show that she understands the connections between human security and climate, she didn’t use the microphone.” That’s a good point.

As for Trump, in 2014, The Donald tweeted: “This very expensive GLOBAL WARMING bullshit has got to stop. Our planet is freezing, record low temps, and our GW scientists are stuck in ice.”

This very expensive GLOBAL WARMING bullshit has got to stop. Our planet is freezing, record low temps,and our GW scientists are stuck in ice

The Bulletin of the Atomic Scientists, which keeps the Doomsday Clock on our inadvertent atomic annihilation, point out that the Republican Party of the United States “stands alone in the world in failing to acknowledge even that human-caused climate change is a problem.” That’s a big problem, and one that’s likely not going to be addressed by a Republican president. It may not be addressed by a Clinton White House, either. In fact, it seems the only major candidate concerned with climate change is Bernie Sanders, who tweeted on April 10: “Climate change is an economic, public health, national security and environmental problem. It is every kind of issue at once.”

Climate change is an economic, public health, national security and environmental problem. It is every kind of issue at once.

Interestingly enough, whatever their political affiliation, the majority of Americans now agrees with Sanders. Will it be enough for him to win the nomination and the White House? Time will tell, but it would do us all a world of good if the other candidates were to adopt similar views about the state of our climate. It seems most of us know that global climate change is happening, so when will they acknowledge it?