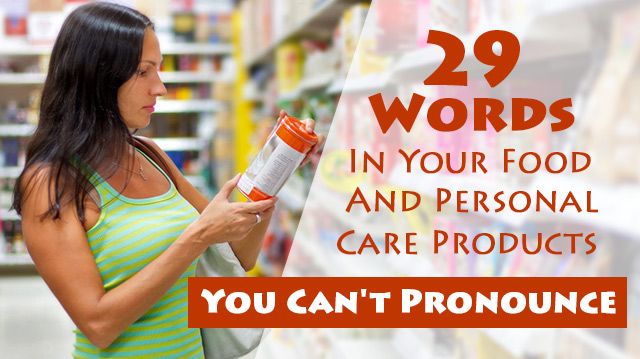 When you eat a fresh, organic apple, there’s one ingredient: an apple. Whole foods tend to deliver all the goodness your body needs without the added garbage. As soon as you pick up a processed frozen dinner or even a popular personal care product, the ingredient list often explodes — sometimes containing dozens of odd-sounding ingredients.

Companies have a tricky way of throwing ingredients into their products that are potentially harmful, disguising them under words that you can’t even pronounce. Some of the following words can threaten your health, yet are easy to come by — which is most certainly the issue.

When you’re shopping, if you come across a product containing one of these words, your best bet is to put it back where you found it. Awareness is the first step when protecting your health, as well as the environment.

It’s important to note that there are many words in which the average individual cannot pronounce, but that doesn’t necessarily mean they’re bad. Olea europaea, for instance, is simply olive oil — you may come across this ingredient in a bar of all-natural soap.

Below, we’re focusing on harmful, yet common words. Although this list is by no means complete — there are thousands of approved additives out there, some being worse than others —this is a good place to start.

Special: Additives in Food More Harmful When Combined with Other Additives

Butylated hydroxytoluene (BHT) — Found in foods such as breakfast cereal, margarine, chips, chewing gum and even olive oil, BHT acts as a preservative. Although deemed safe, some experts agree that BHT may be a human carcinogen, as it’s been shown to cause cancer in rats.

Sodium aluminosilicate — This compound is made of sodium, silicon, aluminum and oxygen. It’s used in dry mixes, flavored salts, icing sugar and other powders, ensuring that the food particles don’t stick together. There are concerns that this additive may be linked to Alzheimer’s, kidney damage and bone disease.

Potassium metabisulfite — These colorless crystals are used as a stabilizer, preventing spoilage in wine, beer, preserves, fruit juice and some frozen vegetables. For asthmatics, the sulfites are believed to be an issue, causing allergic reactions. It’s also believed to cause skin irritation and destroy optimal levels of vitamin B1.

Benzoic acid — This ingredient isn’t as harmful as many of the other additives listed, simply because it’s naturally occurring. With that being said, some people can experience a negative reaction. Although safe for some, others will develop hives, eczema and even experience asthma attacks.

4-methylimidazole — Used in colas, ketchups, malt vinegars, jams, and even rye bread, this contaminant is a possible human carcinogen. When made with ammonia, “caramel coloring” contains 4-methylimidazole as well. Although you can’t always tell if “caramel color” was made with ammonia on an ingredient list, it’s best to avoid this additive all together.

Carrageenan — Found in salad dressings, non-dairy beverages, low-fat chocolate milk and infant formulas, carrageenan is used as a thickener. Extracted from seaweed using acid, this can lead to degraded carrageenan. Although this is not technically what’s added to food, some experts have said that food-grade carrageenan does contain some degraded carrageenan. Linked to gut inflammation and cancer when given to animals in high doses, this additive needs to be more thoroughly tested.

Azodicarbonamide — Not permitted for use throughout the European Union, Australia and New Zealand, this additive is used as a whitening agent in breads, flours, rice, grains, chewing gum and many other baked goods. It has been linked to allergies, hyperactivity, asthma and insomnia.

Disodium 5-inosinate — You’ll normally find this in snack foods and instant noodles. If you’re vegetarian, it’s important to note that this additive is normally derived from animal products. Once again, it’s not recommended for asthmatics or for individuals with gout, as it may trigger symptoms.

Monosodium L-glutamate — This white powder is used as a flavor enhancer and is found in dressings, many frozen foods, canned vegetables, canned fish and more. It’s recommended that you avoid this ingredient altogether, as it has been linked to degenerative conditions, including Alzheimer’s, Parkinson’s and a number of other concerning adverse effects.

Propylene glycol — Used for a range of purposes including a foaming agent and thickener, this additive is also used as an antifreeze. Potentially having negative effects on the respiratory system, skin and renal health, it is listed as harmful by the Agency for Toxic Substance and Disease Registry.

Propyl gallate — Added in order to preserve food, propyl gallate is used in anything from margarine to mayonnaise. Being a suspected carcinogen, it is also banned in infant food, as it’s been linked to blood disorders. Skin or gastric irritation may also occur. Doesn’t sound very safe, does it?

Acesulfame potassium — This flavor enhancer is also used as a sweetener; however, it’s been linked to cancer and tumors in test animals. Being 200 times sweeter than sugar, this additive is said to be worse than aspartame — meaning, avoid it.

Norbixin — Acting as a food colorant, norbixin is found in annatto extracts. Although considered to be a natural colorant, there are concerns regarding hypersensitivity, learning and development issues, as well as cases of skin irritation.

Ethyl maltol — Used to enhance flavor, this additive is actually banned throughout the European Union due to concerns surrounding toxicity. It is not safe for babies or individuals who suffer from asthma.

P-phenylenediamine — Derived from petroleum, this coal tar, which is used in cosmetics and hair dyes, is a human carcinogen and may be linked to cancer. These colors, including p-phenylenediamine, may contain low levels of heavy metals — potentially leading to brain toxicity.

Dibutyl phthalate — Used in nail polish and fragrance products, this additive is easily absorbed through the skin. Unfortunately, there are concerns surrounding genetic mutations and disrupted hormone function. The European Union has listed this additive as a possible endocrine disruptor, which may impair fertility.

Diazolidinyl urea — This is a formaldehyde-releasing preservative used in a wide range of cosmetics. There are concerns that this additive may slowly and continuously release small amounts of formaldehyde, a known human carcinogen.

Polyethylene glycols — Also known as PEGS, this is a petroleum-based compound used as a thickener, softener and solvent in cosmetics. Depending on how it’s processed, it may contain known carcinogens — they have also been linked to genotoxicity.

Cyclotetrasiloxane (D4) — This silicone-based compound is used to soften and moisten skin, but is also found in deodorants, hair products and facial treatments. Environment Canada stated that this chemical is toxic and bio-accumulative, and the European Union classifies D4 as an endocrine disruptor.

Triclosan — Often found in antibacterial products and antiperspirants, triclosan is believed to be an endocrine disrupter, as well as a possible contributor to antibiotic resistance. It’s believed that this ingredient passes through the skin, interfering with hormonal balance. In fact, the United State Centers for Disease Control and Prevention found that triclosan was present in the urine of 75 percent of participants tested.

Methylparaben — There are a number of parabens used in cosmetics acting as a preservative. In fact, an estimated 75 to 90 of cosmetics contain parabens, which easily penetrate the skin. Listed as an endocrine disruptor, methylparaben is believed to interfere with hormone function, mimicking estrogen.

Petrolatum — This mineral-oil jelly is used to lock in moisture. Unfortunately, it is often contaminated with polycyclic aromatic hydrocarbons, which have been linked to an increased risk of cancer. It can also easily cause skin irritations and allergic reactions.

Benzophenone — Found in lip balm, baby sunscreens, fragrances and more, this additive is not only toxic, but bio-accumulative. Being a possible human carcinogen, it’s been linked to cancer, as well as developmental toxicity, organ toxicity and ecotoxicity.

Diethanolamine — DEA is found in nitrosamines, used to preserve nearly any type of personal care product. There is a long list of health concerns surrounding this compound, including cancer, organ toxicity and endocrine disruption — it is banned in Canada.

Methylisothiazolinone (MIT) — This preservative, along with CMIT, are added to liquid products, including shampoo, body wash, lotion, sunscreen and more. There are a number of studies linking this additive to organ-system toxicity in rats, allergic reactions and possible neurotoxic effects.

Octinoxate — This UV filter is rapidly absorbed through the skin and has been found in human blood, breast milk and urine. Used in sunscreen, hair dye, lipstick, nail polish and more, it’s believed to raise a number of health concerns. Numerous studies have suggested that this additive causes harmful effects on reproductive organs and disrupts hormone function.

Phenoxyethanol — Linked to life-threatening allergic reactions and eczema symptoms, this preservative is used in anything from shaving cream to mascara. It’s also been found to affect the acute nervous system of breastfeeding infants — scary!

It’s important to understand what some of these hard-to-pronounce additives are — even if they’re a mouthful. Get to know some of these words just as you easily recognize “wheat” or “flax” within an ingredient list. Also, try your hand at some fun, all-natural DIY beauty projects. You can make your own sunscreen, cream and even toothpaste — give it a shot!