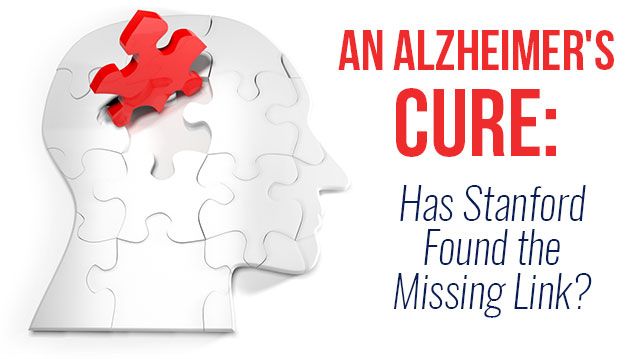 For the millions of individuals currently living with Alzheimer’s disease, as well as their affected family members, some days can feel hopeless. The anxiety surrounding an Alzheimer’s diagnosis is significant, as individuals understand that there is no cure. At this time, symptoms can only be managed in order to improve quality of life.

Imagine being told that you are displaying the initial symptoms of dementia or Alzheimer’s, but knowing that there’s something that can help you reverse these effects? Just imagine the relief. Well, research at Stanford may have found the missing link. Based on recent findings, we are now closer than ever before.

It’s long been known that Alzheimer’s disease develops due to the degeneration of brain tissue. Based on new investigations, Stanford researchers believe that nerve cells die because other cells, known as microglia, stop functioning. These cells specifically absorb and eliminate harmful deposits, bacteria and viruses from the brain.

Microglial cells account for approximately 10 to 15 percent of brain cells. Think of them as your brain’s defense system, looking for and destroying foreign invaders. As they lose their ability to function, a protein called amyloid-beta begins to build up and inflammation significantly increases.

Report: The Alzheimer’s-Reversing Oil That is Beating Prescription Drugs

If you are familiar with this disease, you know that amyloid-beta plaques are a key hallmark. These plaques are essentially created when pieces of amyloid-beta clump together. Once this occurs, these clumps begin to block and erode synapses, causing nerve cells to degenerate.

Within the younger population, microglia function as they should, but as individuals age, a protein known as EP2 reduces the efficiency of microglial cells. EP2 interferes with the functioning of protective microglia. However, when EP2 is blocked, microglia continue to target and destroy harmful plaques.

While studying younger mice, it was found that the microglia reduced the buildup of sticky plaques. When focusing on older mice, however, EP2 did not allow these defensive cells to produce the enzymes required to digest plaques. Researchers at Stanford found that when studying these mice, blocking EP2 reversed the memory loss symptoms in mice.

Certain mice were genetically engineered not to have EP2 and, in turn, did not develop Alzheimer’s — even when researchers injected amyloid-beta. This suggests that these specialized brain cells naturally got rid of destructive proteins. As mentioned, mice who had developed Alzheimer’s, experienced symptom reversal once EP2 was blocked.

It was concluded that when this specific protein (EP2) is inhibited, healthy microglial function is restored. These findings, published in the Journal of Clinical Investigation, suggest that progressive Alzheimer’s symptoms may be prevented by increasing microglial function.

At this time, it’s believed that cases of Alzheimer’s will triple by the year 2050 — meaning a cure is critical. Although these findings are exciting, more research will need to be conducted. If this relationship is accurate and blocking EP2 would prevent symptoms of Alzheimer’s, researchers will develop treatments that will then need to undergo testing. In fact, they’re currently working on a possible treatment, as discussed below.

The research that’s being conducted worldwide is a collaborative effort, as scientists and researchers build studies based on previous findings. Released just this month, it’s been found that a possible treatment will target the onset of Alzheimer’s, stopping the first step that essentially leads to brain cell death.

Originally approved for anticancer treatment, bexarotene stops primary nucleation. In simpler terms, it hinders the formation of sticky protein clumps. Although researchers from the University of Cambridge, U.K., do not believe that it will reverse symptoms once Alzheimer’s has developed, it could act as an early preventative measure.

Another possible treatment, known as C31, is now in phase II at Stanford. Currently being tested on humans, this potential treatment has been shown to disrupt at least 10 to 14 amyloid-related brain signals which essentially lead to deteriorating neurons. If successful, this will be the first of its kind — changing the course of Alzheimer’s disease.

Since 2000, more than 200 possible Alzheimer’s drugs have been tested. As you can imagine, researchers, and millions of hopeful individuals worldwide, continue to wait for a breakthrough — hopefully C31 will be the first major milestone.