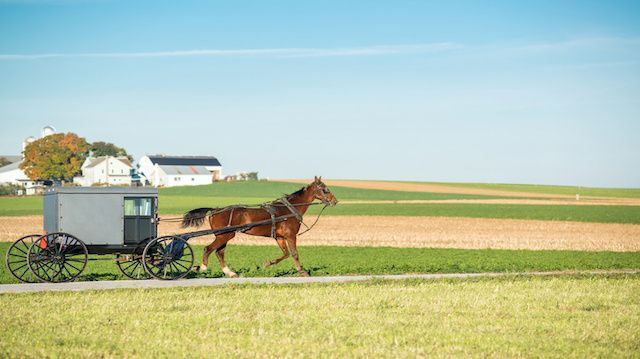 A few days ago, I stumbled across an opinion piece from Quartz that examined the way in which the Amish people approach health care and how it is drastically different, and in most cases more effective, than the traditional Western approach to treating illness and disease.

The article recounted a story narrated by John Keim, an elder and community leader of a small Amish settlement in northern Pennsylvania. Keim described how two of his cousins had once been burned in a fire and been treated in the burn unit of an Indiana hospital for three months. Keim recalled how the children had screamed as their wounds were cleaned and their bandages replaced. “It just felt so inhumane,” he said. “I would not ever take a child to that burn unit.”

When Keim’s son was later scalded by a boiling pot of water, he and his wife resolved to treat their son themselves and spare him the torment that their cousins had gone through via traditional Western hospital treatment. They consulted the collective herbal lore of their people, along with any extra information they could find from other cultures, and began to collect herbs and plants from the surrounding countryside. Keim told how, after a number of attempts using other herbal treatments, the solution came to him when he happened upon a patch of plantain leaves in a field not far from his house. He boiled the leaves to make them malleable and wrapped them around his son’s burn wounds. Within five days, new skin covered the burn areas and his son was well on the road to recovery.

We’ve all heard these anecdotal stories of how a simple herb or ancient treatment cured an illness or disease when Western medicine couldn’t. While these stories may be dismissed as anomalies or subject to verbal or written hyperbole, they serve as an important reminder to those of us who have unshaking faith in government-endorsed health-care systems. And the reminder? It’s dangerous to rely too much on one particular thing.

For well over 2,000 years, the interaction between doctors and patients was guided by the Hippocratic oath. The oath required doctors to operate under what would later come to be called the “beneficence model,” a practice that required them to treat injury and disease while doing no harm to their patients.

Following World War II, the defining principles of Western medicine began to change. A paradigm shift toward the “autonomy model” of health care gave rise to an increasing number of incidents whereby patients were operated or experimented on without their prior consent. Cases began to accumulate in which horrible treatments had been inflicted on patients without their full knowledge of the treatment or indeed their consent, while a 40-year research project conducted by the United States Public Health Service intentionally withheld syphilis treatment from poor African-American men.

While changes have been made in the field of Western medicine to ensure this kind of inhumane treatment doesn’t happen in today’s America, it’s not hard to see that doctors may not always have our best intentions at heart. Despite this, household spending on health care in the United States has never been higher. A report published last year by the Commonwealth Fund revealed that no other country in the world comes close to the US in annual spending on health care.

The study, which analyzed and ranked 13 high-income nations on their overall health spending, found that the US spent an average of $9,086 per person on health care in 2013, translating to over 17 percent of gross domestic product. Switzerland, the country that ranked second in health-care expenditure, averaged only $6,325. And despite the amount Americans spend on health care, the study found the United States to have achieved the worst statistics when it came to rates of chronic health conditions, obesity and infant mortality.

So why is it that all this money we’re spending is doing so little to stem the growing tide of death and disease amongst our communities? Well, at least some of the blame lies with the pharmaceutical industry, and its vise-like grip over health practitioners and doctors. It’s a topic we’ve touched upon many times before, as it ranks pretty darn high in our nation’s list of great injustices that continue to be inflicted on the American people.

In one article, we discussed how pharmaceutical companies use special incentives and tantalizing freebies to “market” their drugs to doctors, who often don’t have the time or patience to sit down and review the latest studies surrounding any particular drug these companies are shoving in their faces. Another article estimated that pharmaceutical spending on gifts to doctors amounted to $18 billion yearly. Spending on such an immense scale suggests that gifts, incentives and bonus schemes are being used to entice doctors to prescribe certain drugs rather than prescribe drugs based on their proven merit as determined by peer-reviewed, clinical studies.

The point is, big pharma is out to make money from us, and they have absolutely no incentive to actually make us better or cure our ailments. Their profits derive from illness and disease, so a rise in sickness is actually to their benefit. And by this reasoning, many doctors are also being governed by this pharmaceutical profit-over-health principle rather than treating patients with their best interests at heart. While there are undoubtedly doctors out there who continue to uphold the Hippocratic oath, their numbers appear to be rapidly declining.

This drug-centric model of medicine has become so prevalent in modern society that most of us can’t grasp the once universal concept that we as individuals are responsible for our own health. A 2006 review of disease control priorities in developing countries noted that diseases and conditions like ischemic stroke, diabetes, coronary heart disease and certain cancers, which until recently were predominantly found only in affluent (i.e., Western) countries, are now becoming the main causes of morbidity and mortality throughout the world. The authors also noted that the rates of cardiovascular disease and cancer among migrants transitioning from low-risk to high-risk nations almost always increase significantly.

The review concluded that these patterns of illness between countries show that the main causes of disease in today’s society are environmental, particularly diet and lifestyle, rather than genetic. Such a conclusion goes against our modern American view of disease and illness, which has us believing that disease is completely out of our control and that our own actions and the way we choose to live our lives have no bearing on our probability of succumbing to any number of chronic health conditions.

Perhaps because they have chosen to remove themselves from the modern world, and all the strange notions and misconceptions that a capitalist society has instilled within us, the Amish choose to take a different approach. They’ve come to realize that the current model of investing in health insurance and relying on doctors to ensure our health and well-being is actually doing us damage, as it promotes a mentality whereby we are no longer liable for our own health, meaning we no longer take care of ourselves and rely on doctors with questionable motivations to nurse us back to health with the aid of poorly researched but aggressively marketed drugs.

The Amish, on the other hand, place the onus on the individual and the community they live in, ensuring that they are actually responsible for their own health and make conscious decisions about how they live their lives. When someone becomes sick in an Amish settlement, the church collects donations from the community they live in and those funds are used to pay for that person’s treatment and recovery, be that in American hospitals or at home. This places an obligation and burden on the individual, who would obviously want to avoid having other people pay for their own health problems or injuries.

The implications of this is that it forces people in Amish communities to really think about what they eat, how they exercise, what they expose themselves to and how healthy their lifestyles are. They recognize that disease and illness are merely manifestations of a life poorly lived and that we must be accountable for our own actions.

Perhaps keep that in mind when you pick up the phone to schedule your next doctor’s appointment.

You’re not the only one to reconsider whether conventional Western health care is the answer to your problems. Find out why more and more people are turning to alternative forms of treatment and health care.