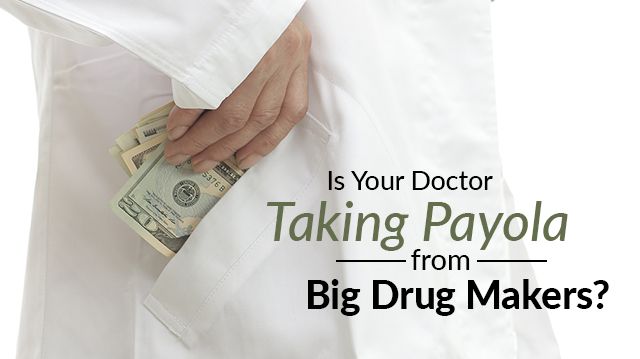 Psst…You know those cholesterol-lowering drugs you’re doctor insists that you take as a preventative even though your cholesterol is normal and they make you feel lousy? Well, it turns out your doc may be getting a kickback from drug makers.

So what if they get a kickback?

Call me old-fashioned, but I want to believe that my doctor is doing the best thing for my family and me when he’s prescribing meds. Perhaps my wishful thinking has become somewhat archaic. Time and time again I’ve spoken to people, and even experienced firsthand, doctors who prescribe the latest drug accompanied by a host of side effects.

Yet, when brought to the doctor’s attention, I’ve often been met with resistance or silence. So then, you have to ask yourself the obvious question: If your doctor is getting a kickback from a certain drug maker, how the heck do you know if it is really the right drug for you or simply the drug of choice, bringing in a little “cha-ching” on the side?

Do drug reps prey on doctors?

Most physicians receive a gift at some point in their career from drug manufacturers. In fact, a study conducted on physicians and the pharmaceutical industry suggests that physicians actually begin meeting with pharmaceutical reps in medical school and continue to meet with them approximately four times per month. It makes you wonder if drug reps prey on doctors when they are most financially vulnerable — loaded with student debt.

And what about those taking payola from drug makers to lecture medical students? In 2004, Dr. Navindra Persaud, who was studying medicine at the University of Toronto, took a weeklong course on how to treat patients suffering from chronic pain. Even though addiction, overdose and death are related to opioids such as OxyContin, his lecturer seemingly minimized the negative effects. Instead, Dr. Persaud’s lecturer spoke of research that supported prescribing the drugs for chronic pain, unrelated to cancer.

Persaud said he and his peers left the lectures without a complete and accurate picture of how to treat patients with chronic pain. At the time, he didn’t think there was anything wrong with the classes; however, today, he knows the lecturer had been previously paid to speak about pain management on behalf of Purdue Pharma LP, the makers of OxyContin. Three years later, Purdue Pharma paid over $600 million to settle criminal charges and civil liabilities for misleading health-care professionals about the addictive properties of OxyContin.

The biggest payouts seemed to go to doctors who prescribe cholesterol-lowering statins. Research conducted by Brigham and Women’s Hospital and Harvard Medical School found that out of 2,444 doctors, who wrote 1.6 million prescriptions for statins covered by Medicare in Massachusetts in 2011, 37 percent received industry payments.

Would you trust your doc if he or she took kickbacks

Most doctors probably don’t want their patients knowing they’ve received a kickback from prescribing a certain drug — and there’s good reason. A study conducted suggests that when doctors accept gifts from the pharmaceutical industry, it does place a strain on the doctor-patient relationship. Patients may no longer trust their physician to make the right choices for them.

Most people surveyed said they would have less trust in their physician if they found out he or she accepted gifts worth more than $100 from drug makers or went on industry-sponsored trips or sporting events. One-quarter surveyed even said they would be less likely to take a prescribed medication if their doctor had recently accepted a gift in return for listening to a pharmaceutical representative’s presentation about that drug.

Be your own health-care advocate

Without doubt, communication is crucial between doctor and patient. However, you also need to take an active role in your own health-care regimen. Research your meds and get informed. Speak to the pharmacist — they can be a wealth of information when it comes to your drugs.

Once physicians graduate from medical school, they often have a tough time keeping up with the latest clinical trials and sorting through the hype on new drugs, ProPublica suggests. In fact, rarely are they even monitored to see if they are prescribing correctly — there’s no universal agreement on what good prescribing is, ProPublica says.

If you’re not comfortable with what the doctor has prescribed you, get another opinion. In addition, seek out a naturopathic doctor who complements your health care. Today, more than ever, you must be responsible for your own health.

If you’re curious about whether your doctor is accepting money from “big pharma,” there is an online searchable database created by ProPublica that tracks payments made to doctors called Dollars for Docs. Pharmaceutical and medical-device companies must by law release details of any payments made to US doctors.

“I will remember that there is art to medicine as well as science, and that warmth, sympathy, and understanding may outweigh the surgeon’s knife or the chemist’s drug.” —The Hippocratic Oath