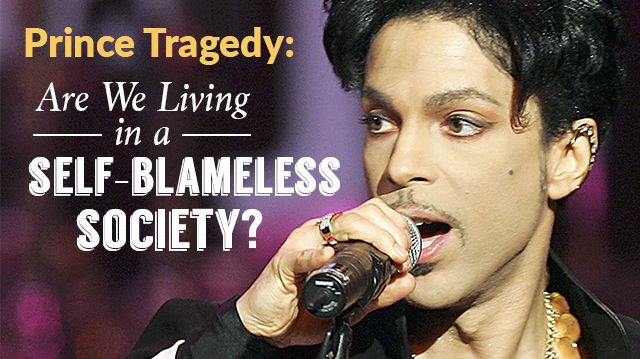 Days after Prince’s passing, speculations abound as to what really caused his death, and who is to blame for the untimely demise of a pop legend.

The seven-time Grammy award-winning artist was found slumped in an elevator at his Chanhassen, Minneapolis, estate last Thursday. While autopsy results are yet to be released, police on the scene reported that his body showed no obvious signs of trauma. He was only 57 years old at the time of his death.

The news of Prince’s death came as a shock to the music world, who are still in the process of coming to terms with the passing of British musical genius David Bowie. Unsurprisingly, while the world awaits the official consensus on what caused his death, rumors regarding who or what was responsible for so abruptly ending the life of a pop sensation continue to spread like wildfire.

As is so often the case with the unexpected death of a well-known personality, the media has wasted no time in examining the event from every possible angle. Articles are popping up left, right and center regarding the cause of Prince’s death, with each new juicy exposé letting the reader in on a brand-new sordid secret regarding the life of the singer or the malpractice of someone responsible for his health.

If you haven’t already, plug in the word “Prince” into your Google or Bing (no discrimination here, folks!) search bar and see what pops up. The number of articles and pieces covering the death of the 57-year-old pop star, and possible reasons for his untimely passing, are already too numerous to count. An article from the UK’s Mirror divulges shocking information from Prince’s brother-in-law Maurice Phillips, who told reporters that the singer had stayed awake for six straight days prior to his death, despite being hooked on sleep-inducing painkillers. The article explained how friends of Prince have suspicions that his death may be linked to drug overprescription by a “dodgy doctor.”

Other explanations for Prince’s death suggest that he may have been the victim of a simple bout of the flu. An interview with Dr. Manny Alvarez on Fox News has the good doctor explaining that these rumors could very well have some merit, with “thousands of people dying every year from the flu.” Alvarez goes on to say that this is one of the reasons authorities stress the importance of getting flu shots. He did not know whether Prince had received a flu shot prior to his demise.

Yet another source places the blame for the singer’s death firmly on the doorstep of drugs. In an interview with NBC’s Today Show, forensic pathologist Cyril Wecht told reporters that “I would give overwhelming odds that, tragically, this is a drug death.” Wecht reasoned that with no history of significant disease, and no known environmental or circumstantial cause of death, the autopsy was likely to come back negative, implying that drugs were the cause. Wecht told NBC that an event the previous week, which involved an emergency landing of the singer’s private jet due to medical concerns, further validated this line of reasoning.

With such an abundance of rumors surrounding Prince’s death, it’s hard to separate fact from fiction. And, when it all comes down to it, it really doesn’t matter. As a nation, we’ve become fixated on the need to blame someone or something for anything that goes wrong in our lives or the lives of those around us. This need for a suitable scapegoat increases in magnitude when such death or misfortune relates to celebrities in the media spotlight, and the sad passing of an industry heavyweight like Prince is a perfect example. Once we get over the initial shock and sadness of someone famous, we suddenly find ourselves with an urgent need to uncover a viscous plot or an unforgivable malpractice against them.

Why is that? Is it possible that, as a nation constantly fed stories of scandal and intrigue, the notion of a pop sensation passing away due to nothing more than neglected health or a merciless work ethic is simply not exciting enough?

The case of Prince may be the most recent in the media, but it is by no means the only example of how the passing of a prominent figure brings out our need to place blame. Take Michael Jackson, for example. Jackson was found dead in his home on North Carolwood Drive, Los Angeles, in 2009. At just 51 years old, the media worked up a storm speculating and ruminating on the possible causes of his premature passing, with stories becoming wilder and wilder as time went on.

Not one but two autopsies were performed on Jackson’s body, with the first concluding no evidence of trauma or foul play. After the second, however, the LA County Coroner issued a statement classifying Jackson’s death as the result of a homicide, with the blame now firmly placed on his personal physician Conrad Murray. Murray was said to have administered a number of drugs to Jackson, which, when combined, caused his death.

While there is little doubt that Murray earned his two-year conviction due to malpractice, the issue highlights something that received little attention in the media — choice. According to friends and family, Jackson had a serious drug addiction problem, which almost certainly contributed to his passing. Jackson could have said “no” to drugs and sought out a lifestyle that encouraged robust health of mind and body, but instead he chose to treat his fears and health concerns with pharmaceuticals which, as we all know, are dangerous to play around with. Yes, his doctor should have known better than to have given him such a heady concoction of drugs, but people tend to forget that Jackson chose to poison his system with drugs, and the doctor merely provided the means to achieve these aims.

The same problem applies to the fast-food industry. In recent years, there has been a proliferation of lawsuits against industry giants like McDonald’s, Burger King, and Wendy’s, typically involving overweight people suing these restaurant chains for making them fat. A classic case in 2002 saw two obese teenagers taking McDonald’s to court on the basis that eating their cheeseburgers made them fat. The teenagers in question had been eating McDonald’s several times a week for years. The two attempted to sue McDonald’s by arguing that their obesity was directly related to the restaurant chain failing to provide the necessary information about the health risks associated with its meals.

The fact that the lawsuit gained any traction at all is a reflection of just how far we’ve come in our desire to shift the blame. An “off the record” conversation with those teenagers would undoubtedly reveal that they knew full well what they were doing to their bodies and just how unhealthy those cheeseburgers and Big Macs were. But run them past a lawyer and they’d be instantly convinced that they are the innocent victims of gross misinformation at the hands of McDonald’s. Nobody in their right mind would ever be under the misconception that McDonald’s is good for our health, yet these lawsuits continue to spread across the country, many of them actually ending in favor of the burger-munching plaintiffs.

It’s apparent, then, that something is seriously wrong with how we react to adverse situations, whether it be the death of a pop star or the wider issue of an increasingly obese population. Rather than just another media frenzy and finger-pointing game, Prince’s death should act as a wake-up call for those who take their health for granted and think that their decisions don’t have consequences. If Prince overworked himself and died as a result of severe sleep deprivation, is it really the fault of the pharmaceutical company that manufactured his sleeping pills, or the doctor whose job it was to prescribe them? If he was run down with the flu and his health was taking a hit from all his touring and live shows, why didn’t he make the decision to take some time out and rest while he recovered?

The point is, these were all his decisions. We need to move past this urge to find a demon or scapegoat where there isn’t one. Nobody forced Prince to perform while he was feeling ill, or to take painkillers or sleeping pills when he didn’t want to. The same applies to our own lives. If we suffer from a disease or illness, we blame the houses we live in, the food we eat, or the radiation we’re exposed to from the environment around us. The blaming comes easy, because we’re taught by the media that it’s okay. And with every lawsuit against McDonald’s, it seems more and more like the right thing to do.

Even more importantly, blaming saves us from really looking inside ourselves and questioning our own actions. We like to think that we’re pawns in the grand scheme of things, completely at the mercy of the pharmaceutical industry, the doctor, the government, the restaurant industry, or essentially anyone or anything else with a shred of influence. It’s easier to find a scapegoat than to admit that it was our own decisions that resulted in disease, or illness, or just general misfortune.

If there’s a takeaway from all this, it’s that we are responsible for our own health. This is an empowering statement, as it implies that you’re not as powerless as you originally thought. The actions you take can either prevent or promote the development of illness or disease. Keep this in mind next time you make a trip down to the drugstore, or pull into the parking lot of a McDonald’s.

The message is simple: stop pointing the finger and start taking control of your own life. Your health will thank you for it.