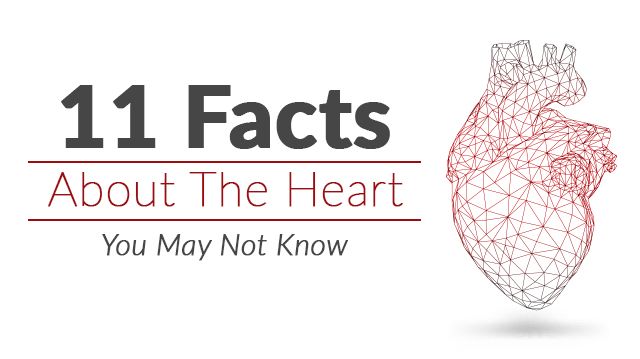 What is the size of two fists clasped together, beats 100,000 times a day and pumps approximately one million barrels of blood in a lifetime?

The answer: the heart. It’s a highly muscular organ that is essential for human life.

Unfortunately, we often focus on the complications of heart health, due to rising rates of heart disease, diabetes, and hypertension. The truth is, there are a lot of interesting facts about the heart that will help shed light on some of the most common heart-related complications.

Whether the following facts help you make certain lifestyle changes or expand your knowledge of this critical organ — it’s important to remember how hard the heart works to keep us ticking.

When the heart stops beating, we can no longer survive. Although we are so reliant on this organ, it doesn’t need us as much as we need it. The heart has its own electrical impulse, so it can continue to beat even if it is removed from the human body, as long as it continues to receive oxygen and stimulation.

This is exactly why doctors are able to perform heart transplants. Although highly complex, a donor heart can be stored for up to six hours, receiving electrical impulses so that it continues to beat. Once sewn into the recipient and perfused with blood, it will continue to contract on its own. In just the United States, approximately 2,200 transplants are performed each year.

It’s no secret that the heart works hard, pumping gallons of blood throughout your body each day. How much blood does it actually pump? One million barrels in your lifetime may seem like a lot, but to put it into perspective, picture this — in order to mimic the amount of blood pumped by the human heart in a lifetime, a faucet would need to be turned on all the way for at least 45 years.

Fact #3: Everyone but the corneas are invited to the blood party

The human body is made up of numerous systems that work together to keep us strong and healthy. In order to maintain positive health, 75 trillion cells receive blood from the heart. It pumps oxygen and nutrient-rich blood to every blood cell throughout your body.

Interestingly, the heart ensures that every cell in your body has access to blood, except for the cornea. Since this part of the eye is transparent, even the smallest blood vessels would interfere with functioning. Instead, the cornea receives nutrients from aqueous humor and tears.

Fact #4: The heart doesn’t always beat to its own drum

Researchers have found a connection between the music you listen to and your heartbeat. In a number of studies, music was able to trigger physiological changes in the heart, influencing heart rate, blood pressure, and even respiration. Within one study it was found that changes in the cardiovascular and respiratory systems mimicked musical tempo.

Fact #5: The heart has been linked to some spooky and tragic events

In a number of cases, heart transplant recipients have experienced some bizarre changes, such as literary tastes and altered personalities. This is what’s known as cellular memory phenomenon — the idea that memories can be stored within individual cells.

Although this phenomenon has occurred with a number of organs, heart transplants are most susceptible. In one case, a man was given a heart from a suicide victim, he then married the donor’s widow and killed himself the exact same way 12 years later.

The benefits of a plant-based diet are well documented, and the findings are highly significant. Within one study, researchers at the University of Oxford examined nearly 45,000 participants — 34 percent were vegetarian. After 11 years, a follow-up was conducted.

Hearts are a symbol of love, and in this case, lovers’ hearts literally beat for one another. When connected to monitors, it’s been found that couples in romantic relationships experience heart and respiration rates that are in sync with one another. When researchers mismatched individuals who were not from the same couple, synchrony did not occur.

There are plenty of genetic and environmental factors that can threaten your heart health. However, when it comes to factors that are directly in your control, smoking is one of the worst. For smokers, the your risk of heart disease increases by 200 to 400 percent, compared to nonsmokers.

Fact #9: Work hard, but not too hard — your heart will thank you

Working long hours each day can affect more than your mental health. In one study, published in the Annals of Internal Medicine, it was found that adults who worked 11 hours per day experienced a 67 percent higher risk of heart disease. It’s suggested that if you do work long hours, you should be especially mindful of a balanced diet and active lifestyle, in order to keep your blood pressure, blood glucose and cholesterol levels within healthy limits.

Fact #10: Don’t cheat your partner’s heart, affairs may be deadly

Early on in life, heart cells permanently stop dividing — essentially hindering cell cycle. From that point on, growth is based on the expansion of cell size, not cell division. This acts as a double-edged sword because although tumor formation is extremely rare, this also prevents the repair of damaged tissue through proliferation.