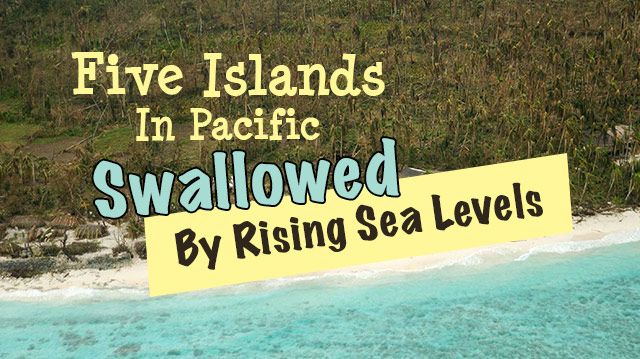 Rising sea levels have caused five of the Solomon Islands to be completely submerged underwater and have caused the displacement of people throughout the region. While none of the five islands that are now below sea level contained human habitation, there are other islands where communities are fleeing because of sea levels that are rising at three times the global rate.

A study published in the journal Environmental Research Letters confirmed the loss of the five islands and involved reviews of satellite imagery and historical evidence dating back to 1947.

Some of the islands have had to be partially abandoned, including the island of Nuatambu, where half the island’s inhabitants have left for higher ground.

As a series of low-lying islands in the Pacific located on a tectonic fault line, the Solomon Islands are particularly prone to natural disasters and the impacts of climate change. Taro Island, with a population of just over 500, might become the first capital of a state to ever evacuate because of rising sea levels.

Tensions between people and ancestral claims over land make relocating populations in the area difficult as well. With over 80 percent of the population relying on fishing or subsistence farming to feed themselves and their families, the loss of their land means everything.

People on the islands

The first settlements on the islands, as far as anyone knows, were from New Guinea and spoke Papuan. Influences from neighboring Austronesia cultures provided agricultural advancements that allowed the population to grow.

Europeans first arrived on the Solomon Islands in 1568, where they reported that headhunters and cannibals inhabited the area. Headhunting was something that was practiced by a small group of people in the islands, most notably the Roviana people who once decimated local populations with their headhunting raids in the 1800s.

The islands were also a key location for fighting between the Japanese and Americans in World War II. In 1943, a torpedo squadron commanded by John F. Kennedy was shipwrecked there after having been attacked by a Japanese destroyer ship.  JFK is said to have used a coconut shell he kept from his time in the Solomon Islands on his desk as a paperweight during his presidency.

The Solomon Islands achieved independence in 1978, but lawlessness and civil war in the area have plagued the society. Between 1998 and 2003, civil unrest was so severe that many labeled the islands as a “failed state.” Ethnic tensions between the Isatabus from the Solomon’s largest island of Guadalcanal and migrant Malaitans basically ground the area to a halt during this period.  An international peacekeeping force, led by Australia, was sent in 2003 to restore some order.

Despite some progress after the international peacekeeping effort, many areas of the islands lacked a way to enforce order.  In 2006, there were mass riots when many began to believe that Chinese immigrants were to blame for all of the area’s economic problems and forced the evacuation of hundreds of people.

Natural disasters have also devastated the Solomon Islands on multiple occasions, including a 2010 earthquake that measured over seven on the Richter scale and the resulting tsunami that wiped out about 200 homes. Cyclone Namu in 1986 was considered the worst cyclone to have hit the area and resulted in an estimated 90,000 people left homeless.

The Solomon Islands have also come under international scorn throughout recent history as well, first for exporting live dolphins to Mexico in 2003 and again when a draft of the country’s constitution in 2014 allowed for discrimination against homosexuality.

It’s certainly fair to say that the Solomon Islands has faced its share of challenges throughout its over 30,000 years of human history. Still, there is some cause for optimism, such as a recently developed renewable energy program funded by the Renewable Energy and Energy Efficiency Partnership (REEEP) that allows farmers to pay for access to solar power by trading their crops.  They also have one of the highest ranked beach soccer teams in the world and have even been announced as the host for the 2023 Pacific Games.

Despite the struggles of those who have lived there, the Solomon Islands have been home to human beings for tens of thousands of years, but now that story is threatening to come to a close. As anthropocentric climate change continues to cause sea levels to rise, small-island states all over the world are at risk of suffering the same fate as the Solomon Islands.

Other small island states at risk

In 2009, the Carteret Islands of nearby by Papua New Guinea became the first for climate change refugees to evacuate their homes for good, when approximately 2,000 of them were forced to flee.

Kiribati, a series of islands also in the Pacific, has actually purchased land in Fiji for its population of 100,000 to live once they have to evacuate, which the Kiribati president believes will be in less than five years.

The world’s lowest-lying country, the Maldives, is on average only five feet above sea level, and experts believe over 77 percent of it will be underwater by the end of the century.

Unfortunately, even though it was discussed early in the conference, a plan on how to deal with increasing numbers of climate refugees was ultimately left out of the Paris Climate Change Agreement.

Some estimates are that 150 million people might become climate refugees in the next 40 years, and as it stands right now, there is no global plan in place to deal with this looming crisis.