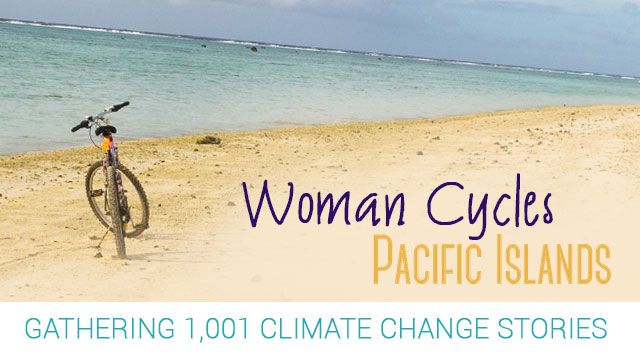 Devi Lockwood, 23, a Boston woman and graduate of Harvard, has been cycling for more than a year in the name of climate change. Lockwood’s green 10-speed bike carries simple cardboard signs hung with knotted green cloth: “Tell me a story about CLIMATE CHANGE,” and, “Tell me a story about WATER” in bold, black and red lettering. Lockwood also carries an audio recorder for those who wish to stop and share their stories with her as she traverses the Southern Hemisphere.

Lockwood has cycled her way across Tuvalu, Fiji, New Zealand and Australia collecting firsthand accounts of climate change in hopes of fulfilling her goal of 1,001 stories, according to reports. Presently, Lockwood has recorded nearly 450 anecdotes about life and climate change, according to Australian news site Mashable. And why 1,001 stories? “There’s something very magical and special about the number 1,001,” Lockwood told reporters, noting that her choice of number was inspired by the famous collection of Middle Eastern folktales, One Thousand and One Nights, also known as the Arabian Nights.

This is not Lockwood’s first cycling expedition. She implemented a similar strategy to gather information for her undergraduate thesis at Harvard University, collecting stories while cycling the Mississippi River. “The farther down I got on the Mississippi River on that journey, the more stories people were telling me,” Lockwood added. “About water, climate change, the changing coastline, and more intense storms that lend to the land being worn away.”

Climate change has become a growing concern for governments and citizens alike. Climate change and rising ocean waters may not be so apparent to those of us living in North America or Europe. However, it is an immediate and rising concern for the people of Pacific island nations, including Fiji, Tuvalu and Kiribati. In less than 50 years, some island nations will be completely displaced, according to a report by The Guardian. Climate change has been listed as the number one global risk in terms of economic impact by the World Economic Forum’s Global Risks Report 2016.

Lockwood’s travels have been made possible through crowdfunding. She has also benefited from the hospitality of locals — finding a few warm showers and comfortable camping spots along the way. So far, Lockwood has recorded nearly 450 wonderful stories. In an attempt to keep her own carbon footprint to a minimum, Lockwood has taken cargo ships and yachts to sail across water, and of course, cycled her way across land.

Inevitably, she has encountered a few challenges along the way. Lockwood says an interesting challenge is remaining objective to the stories she hears. “Pretty recently, I heard a story in New Zealand from a man who had spent his life fracking,” Lockwood told reporters. “He moved to the South Island to distance himself — he hadn’t told anyone in the town what he used to do for work, because he thought he’d be ostracised for it.”

Fracking has been a massive issue in terms of climate change, especially in Australia and New Zealand. Its environmental impact has been a heated topic between conservationists and governments. A report by The Economist suggests that fracking can contaminate groundwater as well as deplete groundwater levels.

Devi Lockwood will continue her cycle for climate change, hinting that Asia or the Americas may be next on the list — all hinging on where the next boat takes her and her green bike.

Do you have a story to tell about climate change?