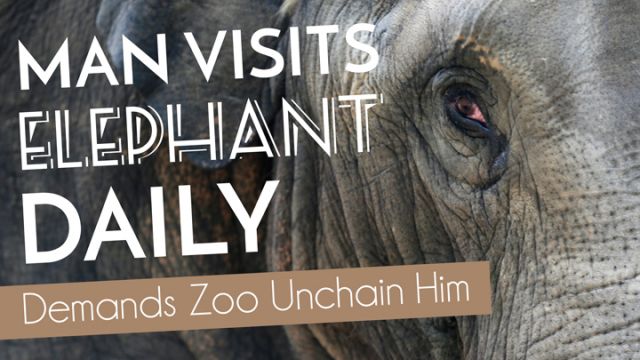 An abused elephant in captivity, previously rescued, was found once again malnourished, chained and kneeling in a concrete pit. Abuse, it seems, is easier for the zoo to maintain than kindness and care for an aging elephant.

Kaavan, a 32-year-old elephant at the Murghazar Zoo in Islamabad, Pakistan had been chained for most of his life in a tiny, hot containment area. Finally, after advocates set their sights on freeing the elephant, he was released from his shackles. For the first time ever Kaavan was able to walk around his enclosure.

For a while, it seemed as if the lone elephant’s luck had changed. Those who fought for his release hoped he would be relocated to a sanctuary where he could roam free with other elephants. Sadly, the story doesn’t end there.

In a country and zoo that has little regard for endangered animals, Kaavan was found weak, chained and kneeling in a concrete pit while his trainer was out selling sugarcane to tourists.

And for that reason, Sunny Jamil and his team from Help Welfare Organization routinely check on Kaavan, every single day. Without them, there would be no hope for Kaavan.

Jamil told The Dodo, “Our team goes to the zoo daily, at different times, to do surprise checkups.” When Jamil found Kaavan chained up this week, swaying from side to side, he demanded that elephant’s trainer unchain him — and finally, he did.

“Despite everything our volunteers have done to ensure that Kaavan is given a proper standard of living,” Jamil said, “the zoo staff still go against the official unchaining orders because it is more convenient to care for a chained elephant than an unchained one.”

Jamil wants the world to know about Kaavan’s plight. But until the gentle elephant finally gets the freedom he deserves, Jamil and his team will be there every day to make sure he is being treated justly.