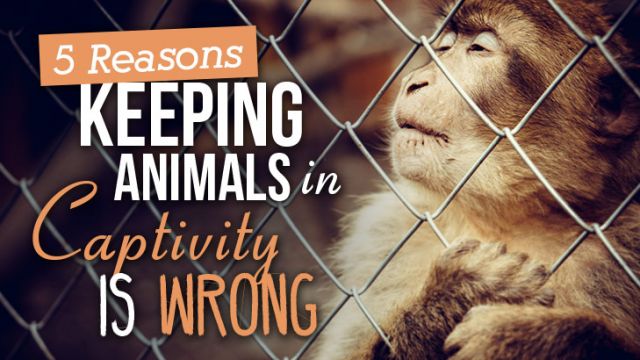 This week, the National Aquarium in Baltimore announced that it would move its dolphin population to a sea sanctuary. The move is in response to shifting public opinions about programs that keep animals in captivity. The outcry is largely a result of the movie “Blackfish,” which documents the plight of orcas at the SeaWorld theme parks. Public pressure led to SeaWorld’s decision to discontinue their breeding program, which will in effect end their captivity program once their existing whales die.

Public outcry shouldn’t be limited to whales and dolphins, however. Captivity for the purpose of helping an endangered species survive is one thing; the California condors might not be around today without breeding programs. The same applies to black-footed ferrets and Kihansi spray toads. From there, however, the water becomes murky.

Often, keeping animals for “educational purposes” is really a smokescreen for profit. Even a non-profit organization pays its employees, sometimes at outrageous salaries. While there may be an argument for using animals for research, using them as a source of personal entertainment and profit is wrong. Here’s why:

Animals are smarter than we think

Often the excuse used for keeping animals in captivity for human amusement is that they aren’t very smart. Not only are they lesser beings who are not entitled to rights, the argument goes, but they also probably aren’t aware of their captivity. Research disagrees. We have all heard about intelligent elephants, whales and primates. In some ways, these animals are even more intelligent than humans. One might be surprised to hear that this doesn’t stop at mammals. Birds and even reptiles are smarter than you think, too.

Animals are more social than we understand

Another variety of this excuse for keeping animals in captivity is that they aren’t as compassionate as humans. After all, intelligence does not a self-aware individual make. Without society and compassion, animals are still lesser beings placed on earth to be utilized as a resource, the thinking goes. Evidence is mounting against this argument too. Elephants grieve their dead. Dogs will protect the bodies of their deceased owners. There is even evidence of birds in mourning. Animals have complicated societies. They are just different from ours.

A great number of animals held captive have a startlingly negative response. Orcas in captivity often have collapsed dorsal fins and destroy their teeth chewing on their enclosures. Elephants swing from side to side in boredom and frustration. Caged birds pick their own feathers out. Leopards pull out their fur. The list goes on. Keeping animals captive at the expense of their health is clearly wrong.

This may not apply to all animals, but it applies to most. Any enclosure that is large and varied enough to allow for animals to interact with their environment and each other in ways that mimic nature will be too large to allow for human observation. There simply is not a humane way to keep animals in captivity while also allowing patrons to watch them for pleasure. Even “wild” animal parks inadvertently place limits on migration.

Ensuring animals are well-treated is near impossible

Even if it were possible to keep animals in captivity humanely, it would be near impossible to regulate, mandate and enforce their proper care. Even today, the laws we have in place to protect zoo animals are woefully under-enforced. We haven’t even managed to keep our pets safe.

What can you do? Try to research any zoos, aquariums or parks you might want to visit, to understand how well they do their work and how much science is behind their programs. Avoid circuses and theme parks with animal acts completely. And work to educate others about the needs of wild animals in the spirit of enlightening their choices in the future.