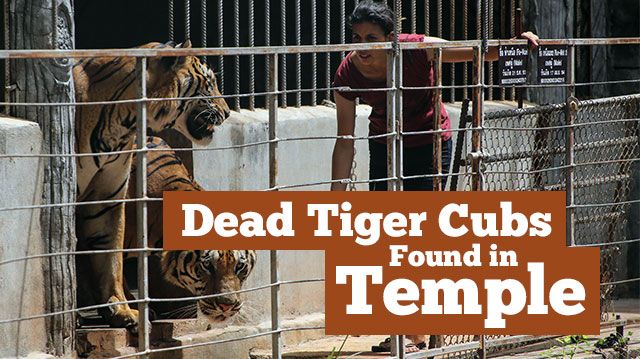 A raid to remove live tigers from  a controversial “Tiger Temple”  in Thailand following allegations of animal cruelty has led wildlife officials to discover the remains of 40 dead tiger cubs. Although the monks adamantly deny any wrongdoing, officials and animal activists believe that the market for tiger bones and body parts, sold for medicinal purposes and religious charms, could be behind the grisly discovery.

While removing a dozen or more adult cats from the infamous Wat Pha Luang Ta Bua, a temple and purported wild animal sanctuary, Thai police made a grim discovery. The popular tourist attraction, raided by the authorities last Monday, hid the bodies of 40 tiger cubs in a freezer. The Thai Buddhist temple now stands accused of wildlife trafficking and animal abuse.

For decades the temple has been a popular tourist attraction for visitors to Thailand. It allowed guests to pose for photographs with the animals or help them exercise. But animal rights activists have long campaigned to close down the temple, claiming it was a “living hell” for the animals.

“We found 40 tiger cubs today,” Thai Police Col. Bandith Meungsukhum to AFP. “They were aged about one or two days when they died, but we don’t quite know yet how long they have been dead.”

Officials laid out the cubs on a blanket alongside the body of a bearcat, some deer horns and nearly two dozen containers filled with body parts. While it’s unclear why the dead cubs were frozen and being stored in the temple, tiger bones and body parts are frequently used in traditional Chinese medicine.

It is not uncommon for tiger bones to be used in traditional Chinese medicine. In fact, there is little doubt that the trade in tiger bones for medicinal purposes is a major cause behind the decline of tigers in the world, according to Britannica Advocacy for Animals. Today only about 3,200 tigers remain in the wild, wildlife activist Judith Mills told Yale Environment 360.

In 2007, the U.N. Convention on International Trade in Endangered Species voted against breeding tigers for trade in their parts and that tiger farming should be phased out. But that decision has been steadfastly ignored by China’s State Forestry Administration, says Mills.

Evil comes in many forms

Wildlife authorities have battled the “Tiger Temple” monks since 2001, when allegations of wildlife trafficking and abuse surfaced. The monks, despite mounting evidence to the contrary, deny any wrongdoing.

The World Wildlife Federation (WWF) commended the Thai Department of National Parks, Wildlife and Plant Conservation for taking definitive action to permanently remove the tigers from the “Tiger Temple” and relocate them to government facilities. The WWF says that the current action to remove the tigers should be permanent and followed up by legal action to ensure that the temple never again keeps tigers in captivity.

Before the temple was shut down, tourists traveled three hours from Bangkok to the temple in Kanchanaburi province. The attraction, which is run by Buddhist monks, is one of the few places in the world where tourists can get close enough to touch a tiger.

Behind the religious facade and the guise of being a sanctuary, there were signs of abuse and neglect. It seems clear that the animals were sheltered for the purpose of making money. Last year, a temple veterinarian  turned whistleblower handed authorities three microchips he said had been inside three tigers that disappeared mysteriously.

Buddhism is an animal-friendly religion, yet some of the aspects are negative, which may explain why the Buddhist monks at the “Tiger Temple” knowingly allowed the tigers to be harmed.

Yet the principles of karma also teach that souls are reborn into animals because of past offenses. Being reborn as an animal, therefore, is a serious spiritual setback in the eyes of Buddhists. Since animals can’t engage in conscious acts of self-improvement, they can’t improve their karmic rank. Their souls continue to be reborn as animals until all the bad karma is depleted.

Only after they are reborn as humans can they resume the pursuit for nirvana. Some Buddhists think that animals are thus spiritually inferior, justifying their exploitation, abuse and mistreatment.

Animals can’t speak for themselves, which is why, morally, we need to speak on their behalf and protect them from opportunists who seek to exploit them for human amusement, body parts and, ultimately, profit.

To date, dozens of the 137 tigers at the temple dozens have been removed. Let’s hope the tigers that remain will also be removed and that the temple is shut down and barred from ever farming tigers again.