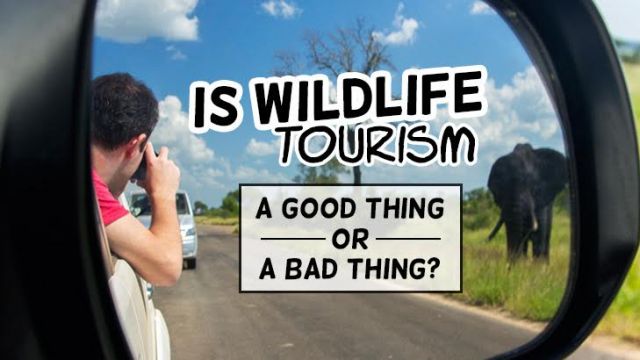 There have been a few victories lately for animals:

—SeaWorld agreed to end its long-running orca shows, and while criticism still exists regarding its handling of this, the announcement does show how far public perception has come.

—The Ringling Brothers Circus announced last year that it would no longer be showcasing captive elephants beginning 2018, and that its current cast of elephants would be transferred to a sanctuary in Florida.

These two announcements seem to indicate that the public will no longer support captive animals being taught tricks and paraded around for our amusement. Despite an apparent shift in public opinion, however, animals being used as live attractions isn’t a problem that is going away anytime soon. In fact, it might be getting worse.

Wildlife tourism accounts for 20–40 percent of all tourism, and frequently has a devastating impact on the species involved. An aspect of this issue that is particularly sad is that often the tourists who pay fees or purchase tickets to see these animals up close are people who really love animals.

In response to this, some wildlife tourism operators will claim that proceeds from their business go to fund conservation efforts, or even claim that their operation itself is a sanctuary in order to make these tourists comfortable with the exhibit. Many times this turns out to be far from the truth, with animals being kept in horrid conditions and little or none of the revenue earned being put towards conservation.

Elephant riding has become a popular attraction in Thailand, Nepal and other areas of Asia. Elephants have been used in Thailand for years as part of the logging industry. In 1989, however, Thailand issued a ban on logging due to the loss of two-thirds of the country’s forests. This left a lot of elephants with not much to do. Those who had used elephants for logging began charging tourists a fee to ride atop the backs of the elephants, and a new industry was born.

In order for an elephant to allow someone to ride atop its back, it must be broken in and trained, and even separated from its mother. Baby elephants are particularly popular for tourists, but since breeding elephants can be difficult, exhibit owners find it easier to simply kidnap babies from the wild.

Elephants have very tight familial bonds, with female elephants staying with their mothers their entire life and males staying alongside their mothers until their teenage years. Separating baby elephants from their parents is traumatic for both child and parent.

Wildlife tourism promoters will often refer to their exhibits as “elephant sanctuaries” so that tourists will not see the practice as unethical. Animal rights organizations dub these exhibits, “sham-sanctuaries.”

It is estimated that there are between 3,000 and 4,000 elephants in Thailand, and approximately half of them have been trained for use in the tourism industry.

Who wouldn’t want to swim with dolphins? They are so fun-loving and adventurous, dolphins appear to be humans’ ocean friends that just want to hang out with us all the time. This is why many wildlife tourism promoters have “swim with dolphins” exhibits, where tourists can pay a fee to swim with captive and traumatized dolphins, for fun!

In the Caribbean, it is estimated that at least 30 such exhibits exist, with approximately 240 dolphins being used for such attractions. The conditions in which the dolphins are kept for these exhibits are not humane, according to groups like reEarth and the Animal Welfare Institute, which have been campaigning against these exhibits for decades.

In the wild, dolphins will dive down as deep as 60 feet, but the pools in which these attractions keep their captive dolphins are usually around 10 feet deep. In some cases, dolphins become noticeably darker because of increased exposure to the sun.

Dolphins are highly intelligent animals that belong to complex social groups. Placing them in small, contained pools is very damaging to them. As is the case with elephant rides, often these programs will insist that proceeds generated are used to support marine education and/or conservation.

Diana McCaulay from the Jamaica Environment Trust doesn’t see these attractions going away anytime soon, especially if their main customer base, cruise ship tourists, keep flocking to the Caribbean.

“Unless you stop the demand side, which is those great many cruise ship passengers and North American tourists, you will continue to see dolphinariums open in the Caribbean,” McCaulay was quoted as saying.

Orca shows in China and Russia

Sadly, even though SeaWorld will no longer be presenting orca shows, it doesn’t mean that orcas aren’t still being kidnapped from the wild and put on display.

Aquariums, such as Russia’s Mosquarium, are now popular in Russia and China, with experts believing that at least 16 orcas have been captured off the coast of eastern Russia since 2012.

Countless other examples of wildlife being kept in poor conditions and put on display exist around the world. Exhibits where tourists can take selfies with lion or tiger cubs, dancing monkey shows in Thailand, roadside zoos, crocodile farms, and snake-charming exhibits are some examples.

Any kind of wildlife tourism will involve some degree of disturbance to natural habitats, even with seemingly harmless activities such as whale-watching. Some general guidelines do exist to minimize the impact of tourism, however. The most important guideline is to always view animals in their natural habitat, not in captivity.

World Animal Protection, an international animal welfare group, is organizing a trip to Romania to observe from a distance many of the bears it has helped over the years through campaigning. The trip provides an opportunity for people to enjoy viewing — not disturbing — these animals in their natural environment.