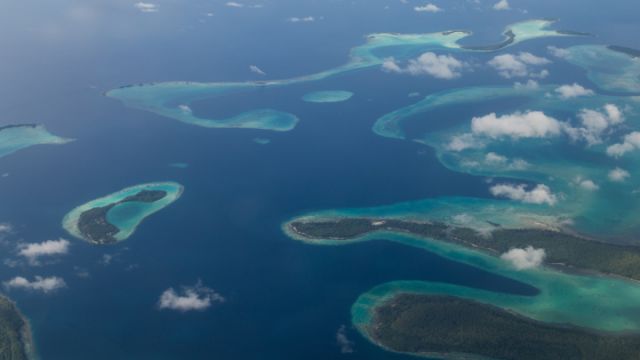 This September, representatives from over 30 islands in the Pacific are calling on all faith communities across the world to “pray for the Pacific.” Specifically they are calling on people to pray that solutions to the climate crisis prevent rising sea levels from enveloping the land that the people of the Pacific Islands call home.

International climate change campaigning organization 350.org has helped to organize people from the area to work together in raising awareness of how vulnerable the Pacific Islands are to climate change. As faith plays a pivotal role in the lives of their fellow islanders, so too does it play a role in 350.org’s Pacific-based organization. The local collective of 350.org volunteers in the area have branded themselves “the Pacific climate warriors” and their tag line is “we’re not drowning, we’re fighting.”

The #PrayforourPacific campaign is set to take part between Sept. 3 through 11, and faith-based communities are being asked to take a moment in their prayer service on whichever day during that week their sabbath falls on. What the Pacific Climate Warriors are asking for is pretty simple: pray for the Pacific. It is their hope that doing so will raise global consciousness regarding the plight of those who are losing their homes in places like the Solomon Islands.

Registering faith-based organizations will be sent information on how they can incorporate the Pacific into their prayer services.

Vulnerability of the islands

The Pacific Islands are some of the most vulnerable areas to the impacts of climate change.  Earlier this year it was revealed that five of the Solomon Islands have now been completely submerged due to rising sea levels. As some land becomes inhabitable people have to be displaced, which can be difficult.

Families often have traditional claims over territory, so when communities need to move it can trigger conflict between people. Taro, the capital of Choiseul, is set to become the first state capital in the world to have to completely relocate its citizens and services as a result of the impacts of climate change.Many are referring to those in the area as the world’s first climate refugees.

Birth of the Pacific Climate Warriors

The Pacific Climate Warriors are a young organization, having launched a little over three years ago at a Powershift conference in 2013. Their first call to action was to bring together concerned citizens, often youth, who wished to join a movement aimed at raising awareness of the impacts that climate change is having on their home. They began by building traditional canoes that they would later use as part of their public awareness campaigns.

In October of 2014 the Pacific Climate Warriors took those canoes to Australia where they blocked a coal port. The message was this: fossil fuel industries, such as coal, are sinking the islands in the Pacific.

Shortly before world leaders were scheduled to meet in Paris at the COP21 forum, members of the Pacific Climate Warriors visited Pope Francis in the Vatican City. The pope delivers the apostolic blessing every Wednesday (provided he is in Rome at the time) in St. Peter’s Square.  The Pacific Climate Warriors travelled there to receive the blessing on behalf of all of those from their home, on the frontlines of climate change. The group also delivered a gift of hand-woven mats to Pope Francis, which they had been using for prayer in the days leading up to their visit.

350.org has praised Pope Francis for stating that the global community must come together to tackle climate change in order to prevent suffering worldwide.

Another tactic that the Pacific Climate Warriors are using to combat climate change is taking part in 350.org’s fossil fuel divestment campaign. This style of campaigning has been used with much success in the past by human rights organizations, and for the last few years has been popular amongst university and college environmental groups.

In a nutshell, a divestment campaign generally consists of a group of people pressuring banks, religious organizations, companies and individuals to stop investing in companies that are involved in operations that are harmful to people, the planet or wildlife. This can involve letter-writing campaigns, protests or pressuring citizens to close their accounts with banks in protest.

Often, as is the case with the fossil fuel divestment movement, investors are encouraged to divert their funds to alternative businesses that do not carry the same social cost, such as renewable energy projects.

The most well-known successful use of a divestment campaign was in the mid-1980s, when universities, banks, companies and individuals were pressured to end their investments to South African businesses until an end to apartheid.

For 350.org. this has become their signature campaign. As for the Pacific Climate Warriors, they brought their message of divestment to Australia where they, along with other climate change protestors, have been targeting the ANZ bank for their investments in fossil fuels that some have estimated to be as high as $13.5 billion.

What’s next for the Pacific Climate Warriors?

While 350.org calls on Pope Francis and Vatican City to divest their own investments in the fossil fuel industry, the Pacific Climate Warriors will continue to place focus on their upcoming #PrayforourPacific event from Sept. 3 through 11.