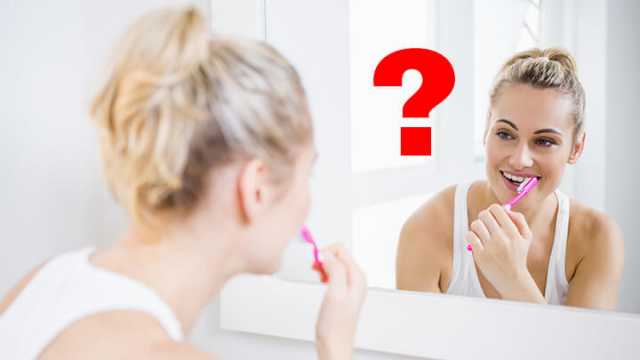 If you’re like me, your dentist drilled into you to brush and floss your teeth every morning right when you wake up and every night before you go to bed. There’s no question that brushing and flossing are the best ways to remove bacteria, strengthen your gums and protect against oral diseases. But there’s one more thing you should add to your morning routine, and it may seem a little strange.

What is oil pulling?

Recently I went to my dentist for a cleaning and she was stunned when she looked inside my mouth. She couldn’t understand why my gums were so pink and tight, and why I was missing so much plaque between my teeth. I barely needing a cleaning and my teeth had never looked whiter. She asked what I had been doing differently, and the answer is simple: oil pulling every single day.

Oil pulling is an ancient Ayurvedic practice that’s been around for thousands of years. It involves swishing oil around in your mouth to pull out harmful bacteria lodged between your teeth and underneath the gum line. Though you can use extra virgin olive oil or sesame oil, most people use coconut oil due to its antibacterial and antifungal properties.

How to do oil pulling

Oil pulling can be incorporated into your routine fairly easily. I like to do it while I’m prepping foods, cooking, answering emails, folding laundry or making the bed. Just about anything that takes a few minutes! Here’s how to do it:

1. Grab a heaping tablespoon of coconut oil, which usually starts in a semi-solid state.

2. “Chew” on it like gum until it liquefies in your mouth, then swirl it around (like mouthwash) for 10 to 20 minutes. Also, make sure not to swallow the coconut oil, since it’s full of bacteria.

3. Spit it out into a trashcan. Make sure not to spit it into the sink; this can cause clogs once it returns to a semi-solid state.

Some people choose to complete oil pulling after they brush and floss, preferring the taste of coconut oil over harmful chemical and additives. It’s really up to you! In any case, here are five reasons to add oil pulling to your morning routine:

Traditional oral hygiene products contain a wealth of questionable ingredients, including fluoride. In case you’re not aware, fluoride is toxic in your body, even in small amounts. It can cause all sorts of health issues, including tooth discoloration, stomach ailments and metabolism impairment. On the more severe end of the spectrum, experts suspect that fluoride can be linked to vomiting, hyperactivity in children and even cancer — and that’s just one ingredient!

Look at the label of your toothpaste or mouthwash and you’ll be hard-pressed to find a chemical you recognize. Here’s what some of them are and what they can do:

Scary stuff! But on the other hand, coconut oil is completely natural, so you can feel rest assured that there are no harmful side effects. In order to keep your oral hygiene routine as natural as possible, consider switching to a homemade toothpaste as well. Mix 1/2 cup coconut oil, 2 tablespoons baking soda and 20 drops of peppermint essential oil for a zesty toothpaste that will leave your mouth feeling oh-so-fresh.

Coconut oil is natural and tastes great, but does oil pulling actually do anything? Why yes, it does! One study showed that oil pulling with coconut oil significantly reduced the number of Streptococcus mutans in saliva, a bacteria that forms plaque on your teeth. In another study, researchers advised 60 teenagers to oil pull with coconut oil for 30 days. By day seven, researchers already noted a significant decrease in markers for plaque and gingivitis. Oh, snap!

3. It can whiten your teeth

Forget teeth-whitening products that can cause tooth sensitivity, gum irritation and damage enamel. Instead, oil pulling with coconut oil is a natural way to get the same effect. If you’d like to kick it up a notch, complete your oil pulling routine then brush your teeth with a baking soda and lemon juice combination. Mix equal parts baking soda and lemon juice, and brush your teeth as normal. You’ll have pearly whites in no time!

4. It can freshen your breath

If you suffer from halitosis (a.k.a. nasty morning breath), it’s coconut oil to the rescue! A 2011 study showed that oil pulling is just as effective as mouthwash when it comes to killing bacteria and beating bad breath. Researchers found a “statistically significant difference” between subjects who practiced oil pulling and subjects who did not. In this example, sesame oil was used, but you might consider using coconut oil for a sweet aftertaste.

5. It doesn’t harm the environment

When you spit out toothpaste and mouthwash, you probably don’t think much about what happens to the chemicals after they go down the drain. But the truth is, after they leave your bathroom, these chemicals could very well end up in river and lakes, harming wildlife. From there, these chemicals may circulate back into our tap water, along with prescription drugs and other toxins. Gross! There’s just another reason to use homemade toothpaste and coconut oil for oil pulling — being a friend to the environment is, ultimately, being a friend to yourself.

Go ahead and give oil pulling a try. You might just be surprised by what your dentist has to say the next time you go in for a cleaning.