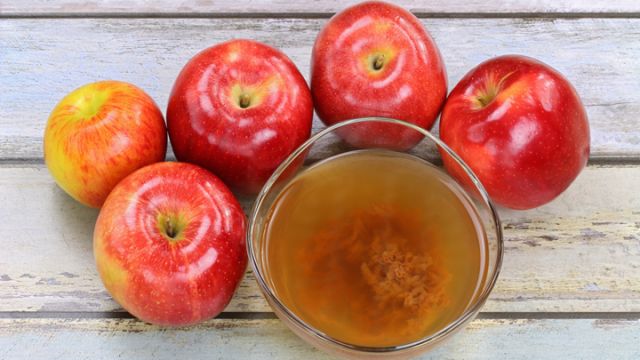 I’ve fallen in love. And, strange as it might sound, the object of my desire is none other than a bottle of fermented apples. And I wouldn’t be the only one out there to fall head over heels for this strange, smelly liquid.

You’ve probably heard all about apple cider vinegar, or ACV as the “cool” kids in the alternative health world like to call it, and you’ve possibly also written it off as just another health fad that’ll soon be surpassed by yet another trumped-up superfood. Well, I’m happy to say that such an event will never come to pass, as this time they’ve got it spot on — apple cider vinegar is the real deal.

I make a point of drinking a healthy dose of ACV at least once a day, typically in a big ol’ glass of mineral water on an empty stomach before eating breakfast. If I’m feeling particularly health conscious, I’ll sprinkle it on a salad as a nutrition-boosting dressing, drink it with a meal to help with nutrient absorption and hunger-quelling, or just before bed as a detoxifier and alkalizer.

Apple cider vinegar has become a big part of my life, and I’d very much like to provide justification as to why it should make its way into your life too. Read on, and find out all the wonderful things that can happen when you add a splash of ACV to your glass of water.

Studies have shown that apple cider vinegar supports healthy insulin response and blood sugar levels. It improves insulin sensitivity when you eat carbohydrate-dense meals, reducing the impact excessive starch can have on your metabolism, improving insulin sensitivity and lowering blood glucose response to this large intake of sugars. For example, scientists found that consuming acetic acid (the type of acid found in ACV) at the same time as eating a 50-gram slice of white bread reduced blood glucose response by 31.4 percent. That’s seriously good news for diabetics.

Research indicates that apple cider vinegar increases feelings of satiety, meaning you feel full sooner and for longer. The consequences of this are that you’re less likely to overeat, consume fewer calories per meal, and can last longer between meals without giving into snacking urges.

Often, people who are dieting with the aim of shedding the pounds fail to do just that or even pack on more weight because they are left feeling hungry after meals. Therefore, they are more likely to snack on foods which spike blood sugar and increase fat storage. For this reason, consuming ACV with or around meals is a much better option than directly cutting calories or eating less satiating meals.

One 3-month study showed that consuming 2 tablespoons of vinegar on a daily basis led to an average weight loss of 3.7 pounds. Study participants who consumed vinegar for the 12-week period also showed a significant reduction in stomach fat, waist circumference and blood triglycerides.

3. Get rid of harmful bacteria

Apple cider vinegar has long been used by many cultures as a cleaning agent, due to the bacteria-killing properties of its high levels of acetic acid. And while this makes ACV an excellent non-toxic alternative to common household cleaners, it also makes it a great option for fighting harmful bacteria in and on your body.

Drinking apple cider vinegar in a glass of water every day can help your body to cleanse itself of excessive populations of bad bacteria, both in your gut and elsewhere. Drinking it with meals can also lower your risk of food poisoning, as studies have shown that ACV can actively inhibit certain bacteria strains, E. coli and salmonella included. Not that I want you to go around consciously eating expired meat or other questionable foods, but sometimes you can’t help it. After traveling for five months in Central America, my boyfriend and I can certainly attest to that!

4. Repopulate your gut with good bacteria

We live in a society which seems intent on killing the good bacteria our bodies rely on for immune response, digestion and a myriad of other vital functions. Things like the contraceptive pill, antibiotics, environmental toxins and stress all conspire to purge our gut of good bacteria and leave it open to invasion by bad bacteria.

One of the best ways to replenish the good bacteria in your gut is by consuming probiotics, and raw apple cider vinegar can do just that. Provided you buy ACV in its raw form (look for words like “with the mother”, “unfiltered” and “unpasteurized”), you’ll be sending your gut a healthy population of beneficial bacteria every time you consume it.

The best way to enjoy all these benefits and much more is in a simple glass of water – one to two tablespoons will suffice. It’s up to you when you drink it during the day, but I prefer to have it first thing in the morning on an empty stomach, to allow it to work it’s magic unhindered by food or other daily tasks.

As mentioned, there’s plenty of other ways in which ACV can enrich your life. Here’s a few more.