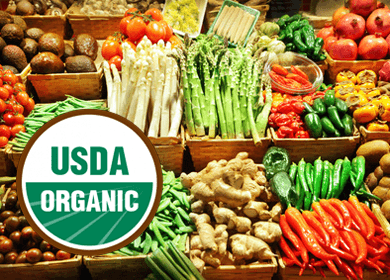 There’s no question that fruits and vegetables are an essential part of a healthy diet and provide benefits to body and mind that go far beyond conventional nutrition. Most are rich in phytochemicals, whose natural power to support health and even combat disease is only now under serious study.

But industrial agriculture relies on hundreds of chemicals to target insects and diseases that can afflict crops. Unfortunately, many remain after the crops are harvested, even after produce is washed at home.

The Environmental Protection Agency tests the toxicity primarily of individual pesticide agents, but scientists are increasingly concerned about combined effects and the possible synergistic effects of consuming many chemicals, even in small amounts, at one time.

Using data from tests conducted by the U.S. Department of Agriculture, the Environmental Working Group has ranked 53 foods by amount and frequency of pesticide contamination. The list below, adapted from their findings, is designed to help you limit your exposure.

Of every 10 apples, nine have traces of the fungicide thiabendazole, a carcinogen; eight also have diphenylamine (DPA), linked to bladder tumors; workers applying it are required to wear long sleeves and gloves. Apples carry 40 other pesticides–carcinogens, hormone disruptors, neurotoxins, developmental toxins. Pesticides aside, apples supply vitamin C and the soluble fiber pectin, which, with apple’s many phytonutrients, curbs heart disease.

The USDA counts 64 pesticides on celery. Every celery stick you chew has traces of chlorantraniliprole, used to kill moths, caterpillars, and beetles by overstimulating their muscles to contract. Spinosad, a similar insecticide, is also ever-present in celery. About 50 percent of celery samples carry methoxyfenozide, toxic if swallowed in large doses. But don’t cut celery from your diet. It’s mineral-rich and an excellent source of fiber and Vitamin K.

Of every two strawberries you enjoy, one probably contains the fungicide captan, a probable carcinogen. It’ is usually accompanied by fellow fungicide pyraclostrobin, a known skin and eye irritant. Still, strawberries are a great fruit to enjoy fresh. They’re packed with vitamin C, antioxidants, folate, and fiber. Recent research suggests they help regulate blood sugar levels.

Not all is peachy with peaches. They carry residues of 62 pesticides. Almost every other peach has fludioxonil, which targets the liver and kidneys. Some 30 percent of samples contain traces of iprodione, a possible carcinogen, and phosmet, which targets the nervous system of insects–and humans, along with our reproductive system. There’s nothing fuzzy about the virtues of peaches. They’re rich in potassium and vitamins A and C.

Popeye may love spinach, but he probably fell in love with it before he knew it harbors 48 pesticides. Close to every other leaf has permethrin and imidacloprid, which disrupt nerve signals. Spinach is still good for you. It’s rich in vitamins A and C, several B vitamins, many minerals, including potassium, as well as the antioxidant beta-carotene. Spinach also protects against prostate cancer.

A clean-shaven variety of peach, the nectarine is a little cleaner pesticide-wise but contaminated with the same substances. The USDA counted 33 different residues. At the top of the list is formetanate, a neurotoxin found in every other nectarine you consume. But don’t say no to nectarines; like peaches, they make for a low calorie, succulent snack with a good dose of fiber and vitamins A and C.

The USDA found traces of 34 pesticides on Chilean grapes. Of every 10 imported grapes, almost 3 have the fungicide cyprodinil, which can irritate eyes, nose and especially skin. One in 5 has the neurotoxin imidacloprid. But grapes are a great food, low in calories, rich in vitamin C, and loaded with phytonutrients with beneficial effects on almost every body system, including compounds that actually promote weight control and longevity.

Behind the colorful coats of bell peppers lurk traces of 49 different pesticides, among them 26 possible hormone disruptors and 13 neurotoxins. More than 80 percent of samples have imidacloprid. The neurotoxin methamidophos, found in 30 percent of samples, is no less harmful. Bell peppers do more than brighten up a dish; they are bursting with vitamins C and B6, over 30 different kinds of carotenoid antioxidants, and boast an array of minerals.

Versatile and satisfying as potatoes are, they are also pesticide-laden, with 37 contaminants in up to 75 percent of samples. Most prominent is chloropropham, sprayed postharvest. In high doses, the herbicide can irritate human skin and eyes. The neurotoxin imidacloprid was found in 23 percent of potatoes tested. But spuds have lots of vitamin C, a good amount of vitamin B6, and important minerals including potassium.

This common salad and sandwich component comes with a side of 51 pesticides. At the top of the heap is imidacloprid, in 73 percent of lettuce tested. Traces of the herbicide DCPA were found in 30 percent of samples. The fungicide dimethomorph found on lettuce can damage lungs if inhaled. But don’t ban lettuce from your diet. Apart from being a source of fiber, it’s rich in vitamins A, C, and K. It’s a fine source of folate. It even contains omega-3s.

Open a box of blueberries and 3 in 10 have residues of the fungicides boscalid and pyraclostrobin. Boscalid is toxic to the human liver and thyroid. Pyraclostrobin can irritate skin in high doses. The USDA found traces of 52 pesticides in blueberries. Such chemical cocktails are not all the tiny berries contain. They also hold an abundance of antioxidants, some that boost memory. Organic blueberries typically contain higher levels of important antioxidants.

Kale is the superfood du jour, a member of the cabbage family, but it also packs a pesticide punch. It shares its top 2 pesticides with lettuce: DCPA, in over 50 percent of samples, and the neurotoxin imidacloprid, in about 30 percent. The USDA found traces of 55 compounds in all. Kale’s nutritional clout comes from vitamins A, B, C, and K, and minerals including manganese and potassium. It also contains glucosinolates, which detoxify carcinogens.

Onions make you cry, but they might be tears of joy, as onions carry the fewest pesticides–only 1 in 0.3 percent of samples tested. It’s dicloran, a fungicide banned in most European countries. Aside from lending flavor to an array of dishes, onions have cardiovascular benefits including cholesterol-lowering effects; they also boost immunity and combat inflammation. Onions contain many phytonutrients, too, including the antioxidant quercetin.

Traces of 6 pesticides have been identified in this juicy fruit, most frequently the neurotoxin triadimefon, in 4.5 percent of samples. It’s also a possible carcinogen. Another pesticide found in trace amounts is carbaryl, a neurotoxin and likely carcinogen which, like triadimefon, is banned in most European countries. Rich in vitamin C, pineapples also contain bromelain, a protein-digesting enzyme that can curb indigestion and reduce inflammation.

The major pesticide used on avocados has as its active ingredient the neurotoxin abamectin, which can lead to loss of coordination and tremors in high doses. Avocados are a good source of fiber and folate, but increasingly research is focusing on avocado oil. Like olives, avocados are rich in oleic acid, known to protect the cardiovascular system. Among other beneficial fats in avocados are phytosterols, which fight inflammation.

The residue of 9 pesticides has been found in asparagus, but in only 3.3 percent of samples. Methomyl, a neurotoxin, is the most frequent. Found in 3 percent of samples is chlorpyrifos, another neurotoxin. Asparagus is a nutritional powerhouse, with significant vitamin A, B vitamins, including folate, and many minerals. It’s also antioxidant-rich, a protector of the nervous system, a promoter of heart health, and a player in blood sugar regulation.

The USDA found residues of 12 chemicals on sweet peas in frequencies ranging from 0.1 to 12.1 percent of samples. The only compound found in more than 10 percent of samples is dimethoate, a neurotoxin. These relatively unpolluted pearls contain omega-3 fats as well as vitamins A, B, and C. Peas also boast a phytonutrient now under investigation for its ability to fight stomach cancer and other phytonutrients linked to lowered risk of diabetes.

The 2 major pesticides used on mangoes are the neurotoxin imidacloprid and glyphosate, an herbicide that’s relatively nontoxic to humans. One mango can supply all the vitamin C you need for a day. The antioxidant beta-carotene gives the fruit its vibrant orange hue. Mangoes contain B vitamins, minerals such as potassium, and proteolytic enzymes that aid and abet digestion.

Eggplant shares with its cousin the tomato residues of the hormone disruptor endosulfan, found in 16 percent of samples. Still, it’s relatively pesticide-free, with traces of 17 other chemicals. In addition to an array of vitamins and minerals, eggplants are uniquely rich in the antioxidant chlorogenic acid, which combats cholesterol and acts as an antiviral agent. Eggplants contain antioxidants that specifically protect brain-cell membranes.

The USDA found traces of 27 pesticides on these globes, ranging from 0.2 to 28.8 percent of samples. Endosulfan is most common. The neurotoxin methomyl comes in second, on close to 16 percent of samples. You can count on a full day’s supply of vitamins A and C in one serving of cantaloupe, along with B vitamins and the minerals potassium and magnesium. The bright orange hue indicates the rich presence of beta-carotene.

Two pesticides used on cabbage are the nerve disruptor chlorpyrifos and the potential carcinogen chlorothalonil, which can damage skin and eyes in high doses. The standard-bearer of the Brassica family, which includes broccoli and kale, cabbage is a good source of vitamin C. It also famously contains glucosinolates, which induce enzymes in the liver that protect against carcinogens. Red cabbage is a special powerhouse of antioxidants.

Riding a wave of popularity as a superfood, kiwis carry only a small pesticide burden. The 2 most common contaminants are glyphosate and paraquat, in 57 and 35 percent of samples respectively. Glyphosate is considered relatively nontoxic, while paraquat, an extremely widely used pesticide, has been linked to Parkinson’s disease. One kiwifruit supplies a day’s worth of vitamin C, and its antioxidants safeguard your DNA. Kiwis also supply potassium and fiber.

The USDA finds traces of 28 pesticides in from 0.2 to 5.1 percent of samples, most commonly the neurotoxin imidacloprid. Thiamethoxam, another neurotoxin, is found in 4.3 percent of samples tested, along with methamidophos, a far more toxic nerve disrupter. Although 92 percent of its mass is water, watermelon is packed with A, B, and C vitamins, along with the antioxidant lycopene, known to reduce the risk of cancer and heart disease.

All of the fruits and vegetables above pose great health benefits without maximum toxin exposure when eaten organically. The best way to choose your produce is to purchase locally grown, organic products that are in season. If you are going to purchase any of these wonderful nutrient-rich foods, it’s best to choose certified USDA Organic.