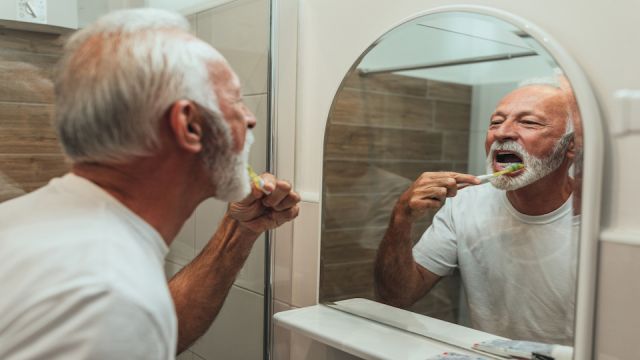 Alzheimer’s is one of those terrifying conditions that can seemingly creep up out of nowhere as you age. It develops over 15-20 years and is a severe condition that causes permanent mental deterioration in middle-aged or older individuals. It is caused by a combination of genetic, lifestyle, and environmental factors, and though scientists are working tirelessly on new medications, there is no known cure or treatment for this disease. However, researchers have discovered an intriguing link between gum disease and Alzheimer’s. Could brushing your teeth really ward off mental degradation?

Researchers at the University of Bergen have discovered a clear connection between mental and oral health and determined that periodontal disease (gingivitis) plays a definitive role in whether a person develops Alzheimer´s or not. “We discovered DNA-based proof that the bacteria causing gingivitis can move from the mouth to the brain,” says researcher Piotr Mydel at Broegelmanns Research Laboratory, Department of Clinical Science, University of Bergen. This bacteria produces a protein that destroys nerve cells in the brain leading to a loss of memory and, eventually, Alzheimer’s.

Of course, it is impossible to say that there is a direct cause and effect relationship since Alzheimer’s is affected by hundreds of factors throughout the body. However, living a healthy lifestyle, one that includes eating right, exercising regularly, and yes, looking after your teeth could ward off the disease for longer even if you are genetically predisposed.

Another study tested mice and determined that the bacteria Porphyromonas gingivalis could migrate from the mouth to the brain and that a toxic protein they secrete (gingipain) could destroy brain neurons that contribute to mental function. This bacteria could also boost the production of amyloid beta, which is a component of brain plaques associated with Alzheimer’s.

The same scientists have used these findings to develop a potential drug to inhibit the effects of Alzheimer’s. The drug is still in clinical trials. However, any breakthrough in the study of Alzheimer’s is welcome, as progress has been slow in developing any treatment methods for this common disease. Thankfully, researchers are working to isolate the particular elements of confusion and memory loss that come with old age and are finding truly revolutionary ways to look at the brain and body.

More research is needed to understand the relationship between these two conditions more clearly, but it is never too early to start paying attention to your health. For now, the best way to decrease your chances of Alzheimer’s and potentially slow its onset is to prevent gum disease by looking after your teeth.

Though you’ve (hopefully) been brushing your teeth your entire life, it is easy to become lazy and not brush properly. Here are a few tips to ensure that your teeth stay as healthy as possible. And your brain too!

Select a toothbrush with soft, rounded bristles and an ergonomic grip. Replace about every two months or whenever the bristles become worn.

Use regular string floss, picks, or sticks. You could even try water flossing as it has been shown to be more effective than traditional floss in reducing plaque buildup.

How to brush your teeth

Brush for at least two minutes, making sure to cover all inner and outer surfaces of your teeth using short, circular strokes and a scrubbing motion. Don’t forget to cover your gumline and your tongue as well, as this is where bacteria collects.

If using standard floss, start with around 18” of string. Wind it around your hands to get a good grasp and glide between teeth with a gentle sawing motion. Curve it into a C shape against your tooth when you reach the gum line to get any stuck on food and plaque. If you don’t floss regularly, your gums may feel sore and bleed slightly. This is nothing to be concerned about and will go away with about one week of daily flossing.

Rinse your mouth vigorously with water after brushing and flossing to remove remaining debris. Brush your teeth twice every day and floss once and get a cleaning at the dentist at least twice a year. There’s no time like the present to start looking after your teeth and your mind.