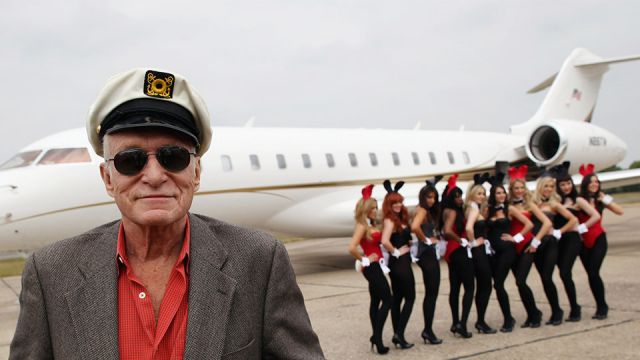 Playboy founder Hugh Hefner has died at the age of 91 in his own home, the Playboy Mansion, in Los Angeles. The news of his death was officially released by Playboy’s Twitter account. The tweet has gone viral with over 180,000 retweets.

For many, Hefner will be remembered for his impact on social movements, free speech, civil rights and sexual freedom. Today, we’re looking back on some interesting facts about his life and legacy.

Here are five things you probably didn’t know about the Playboy legend:

1. Hefner was a writer in the military, then majored in psychology

Hefner was in the U.S. Army as a non-combat writer for two years. He was discharged in 1946. He then studied at the University of Illinois, where he majored in psychology. That same year, 1949, he married his first wife Mildred. He then studied a half year in the area of sociology, focusing on the sex research institute established by Alfred Kinsey. In the early 1950s, Hefner got a copywriting job at the Chicago office of Esquire magazine, which also had the works of Ernest Hemingway and F. Scott Fitzgerald. Hefner left the publication after they told him they were moving to New York and he was denied a $5 raise.

2. He had four children from his first two marriages

Current Playboy CEO Cooper Hefner is one of the Playboy founder’s four children. Even at the young age of 26, he is running a multimillion-dollar organization.

Cooper is from Hefner’s first marriage with Kimberley Conrad, a former “Playmate of the Year.” They finally divorced in 2010 after being separated for 11 years.

Cooper’s older brother, Marston Hefner, was also from his second marriage. He is age 27.

3. Even in the early days, Playboy was an instant success

On his own, Hefner raised $8,000 from 45 different investors, which was vital in order to get his magazine up and running. He originally wanted to call it “Stag Party,” but was forced to change it because of a trademark problem with the existing Stag magazine. One of his colleagues mentioned the name “Playboy,” after a shutdown automobile company.

The first edition of Playboy was produced out of his South Side home. It hit the newsstands in December 1953. To help ensure at least some success, Hefner purchased a color photograph of Marilyn Monroe, which had actually been taken some years earlier, and put it in the centerfold of the magazine. The first issue sold more than 50,000 copies and became in instant hit.

The mansion was essentially a playground for the rich and famous, which is located in Holmby Hills, California. The estate really became prominent in the 1970s for it’s ostentatious parties with Playboy Bunnies and extremely famous celebrities. The house was purchased by Hefner’s company in 1971 for approximately $1 million dollars, which would be worth $6.1 million in 2017. Technically, he never owned the home. Recently, the house was purchased in 2016 on the condition that Hefner could rent it out for life.

5. He had three marriages, despite a lifetime of different acquaintances

His first marriage was to Mildred Williams, his high school sweetheart. They were married for 10 years and had two children, mentioned above. Reportedly, their marriage hit a brick wall when she confessed of having an affair while Hefner was in the military.

His second wife was famous model and actress Kimberley Conrad. She was “Playmate of the Year” in 1989, and they got married in 1989. Their marriage lasted 11 years.

His third and final wife, until the day of his death, was Playboy bunny Crystal Harris. She was reportedly 22, while Hefner was 82, when they started dating. She will not be inheriting anything, due to the fact that she signed a prenup and wasn’t in his will upon death.

What are your thoughts on Hefner’s life and legacy? How will you remember him? Let us know!