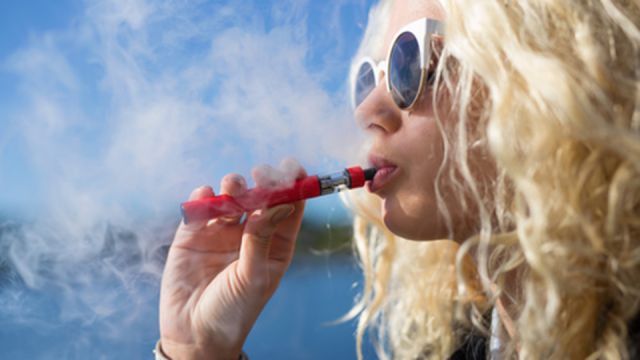 According to new research from the University of North Carolina, e-cigarettes are equally as detrimental to your health, compared to traditional cigs.

Their data, which was collected from nonsmokers, e-cigarette users, and cigarette smokers, found that e-cigarettes are triggering damaging immune responses. Also, e-cigarettes are creating changes to protein expression and mucus composition, which are definitely linked to adverse lung effects.

E-cigarettes, which commonly go by the name “vapes”, are falsely being labeled as a better and healthier alternative.

Picture of a woman smoking an “E-Cig”:

Dr. Mehmet Kesimer, an associate professor of pathology at the University of North Carolina argues, “Our results suggest that e-cigarettes might be just as bad as cigarettes.”

The U.S. Food and Drug Administration is also expanding their oversight of tobacco products, as they have included e-cigarettes on their ongoing questions list.

“E-cigs” are trending upwardly is usage in the United States under the assumption that they will slow the harmful effects of smoking, when in reality, researchers are claiming the lungs could be equally damaged.

The researchers are using human airway mucus samples to really see how the different kinds of smoke are hurting the body.

This video, released by CNN two years ago, shows that E-Cigarettes are on the rise among teens, but since, they have become more regulated.

Both e-cigarette and cigarette users saw increases in biomarkers of oxidative stress and the activation of innate defense mechanisms, especially those associated with lung disease.

“Comparing the harm of e-cigarettes with cigarettes is a little like comparing apples to oranges,” Dr. Kesimer said. “Our data shows that e-cigarettes have a signature of harm in the lung that is both similar and unique, which challenges the concept that switching from cigarettes to e-cigarettes is a healthier alternative.”

Do you think “E-Cigs” are a safer alternative than traditional cigarettes? Let us know!