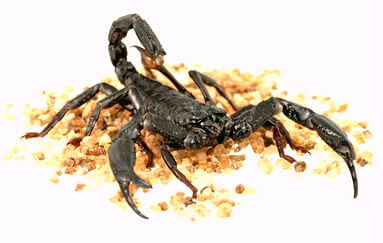 There are places in this country, where secret potions are being mixed together to create some of the most scientifically advanced food formulas on the planet.

But, is this what we need? Is it necessary to create food that is so modified it no longer even resembles real food at the molecular level? What implications does this have on the environment and human health?

So far, we have genetically modified corn, soybeans, cotton, tomatoes, salmon, sugar beets, potatoes, squash, rice, oils and animal feed – now researchers are getting ready to unveil their new creation… the “Frankencabbage”- complete with scorpion poison that has been genetically engineered into a virus designed to infect caterpillars. The genetic material taken from scorpions releases a nerve poison which paralyzes the caterpillar so that it stops eating which allows the virus to act rapidly. Sounds appetizing right? Not!

The Independent reports that scientists who recently sprayed the formula on a test field, wore full body suits for protection and did not disclose vital information to the approval board before spraying.

“Researchers went ahead with the spraying shortly after it was disclosed that the government committee which had approved the trials had not been fully informed of the risks. According to the head of the safety trial, Professor David Bishop, the spraying was completely safe. Ironically, Bishop was not present for the trial but was on vacation at the time.”

New information released just prior to the spraying indicated that the virus, not native to Britain,  was poisonous to over 100 species of butterflies and 75 species of moths in its natural form. These numbers were much higher than those reported to the governing body when approval to spray was being sought. Those against the use of the virus note that the environmental implications of such a project could be very damaging.

Those behind this latest effort to manipulate the health of millions of Americans state that this genetically modified cabbage will require much less pesticide than conventionally grown cabbage. Strangely enough, if pesticides are injected into plants, every cell in the plant will contain the pesticide (a common building block of genetically modified plants). Does that not mean that the consumer will, in fact, consume the pesticide?

It is even unclear at this time whether or not this GMO cabbage will effectively kill insects as the study on its toxicity states that its effectiveness is limited by ingestion. With this information, it is likely that sprays will still be used in conjunction with the genetically modified cabbage – this gives the consumer – a double dose of toxins. Could this breed lead to another case similar to the Roundup Ready glyphosate-resistant crops and superweeds? Only time will tell, but on the outset it looks quite possible.

They Say it is Safe

A study notes that the scorpion toxin AAiT, which is poisonous to insects, is completely safe for humans. Sadly, any testing done with the poison was not done on humans or on normal and healthy cells, but on breast cancer cells

With such uncertainty over the safety of this poison is it likely to get a nod of approval from governing bodies? We can only say that history usually repeats itself.

Unfortunately, with the lax regulations and the FDA’s history of rubber stamping approvals for genetically modified crops, we are not confident that anything will get in the way of this latest mad science effort with capitalistic undertones.

Scorpion poison induced cabbages are not a natural phenomenon, which raises a great big red flag for those concerned with the long term health and environmental implications of such a crop.

While documented research may say that the cabbage is entirely safe. What does that mean? Are there any conclusive long term studies? Inconvenient. Will long-term health be compromised? Inconvenient. Will there be a boom to the seed manufacturer to sell more seeds? Aah, perhaps the real issue.

Keep a watchful eye on this latest genetically modified crop to hit supermarket shelves, and if you see them, walk the other way. You don’t want to be stung by this product!