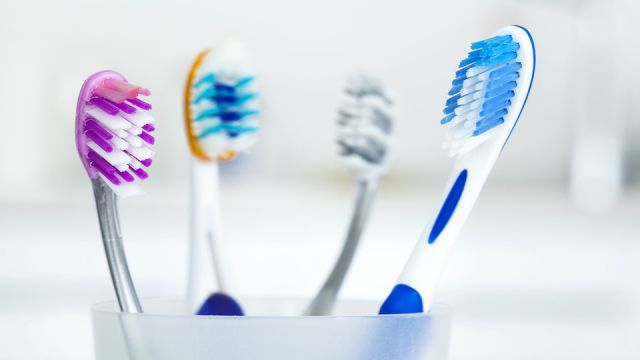 Once upon a time, the basic toothbrush was constructed of natural materials such as boar bristles and bone. However, these materials made toothbrushes too expensive for the average person who was left to clean their teeth with pieces of cloth or their fingers. Many just didn’t bother to clean their teeth at all. In fact, in the early 1920s, only one in four people in America owned a toothbrush.

During the civil war, gunpowder and bullets were wrapped in a heavy paper that soldiers had to rip apart using their teeth. This was a difficult task for many who had only a few good teeth in their mouth.

By the time World War l rolled around, the military was well aware that there was a major problem. Many young men who were otherwise healthy, failed to pass the tooth test – which meant they had fewer than 6 good teeth in their mouth (needed to eat wartime food rations)

World War ll brought with it the instruction for soldiers to take care of their teeth. Dentists were put into battalions and toothbrushes were handed out to all troops. When soldiers came home, they brought their new oral hygiene habits home with them.

A shift in cultural expectations

Dentists began to see bad teeth and lack of teeth as a sign of poor nutrition and a general disregard for personal hygiene. Dental experts started promoting the issue of dental care as a social, moral, and even patriotic issue. Campaigns for healthy teeth began to spring up around the nation. Links between bad teeth and overall health were finally being made and recognized.

Everyone needed a toothbrush

The demand for toothbrushes ignited a flame in manufacturers who saw a way to embrace the plastics revolution for profit.

Chemists made the discovery in the early 1900s that they could create a strong, glossy and moldable mixture for a combination of nitrocellulose and camphor – an oily and fragrant substance from the camphor laurel tree. The substance they called “celluloid” was perfect for molding into practical, fanciful, and cheap toothbrush handles – perfect for mass production ( from a monetary aspect). Sadly, the bristle part of toothbrushes soon followed when a Japanese national laboratory discovered a fine, silky substance that they were hoping would be a substitute for the silk used to make parachutes for its military. The U.S. company DuPont came out with its own very smooth, thin fibered material known as nylon – the near perfect synthetic substitute for boar bristles.

The real problem with plastic toothbrushes

Plastic is virtually indestructible, and although the composition of the brush has changed slightly through the years, it still remains plastic.

The best type of toothbrush to buy

Some companies have reverted back to natural materials including wood or boar bristles. Bamboo handles are one option that helps to solve the plastic problem, but the bristles are still made of nylon so that part is still trash. Other options include toothbrushes that have sturdier bristles so that they don’t have to be thrown away as often – cutting down on toothbrush trash. There are also those that are reverting back to a 100-year-old design that used removable heads and a metal handle which also reduces the amount of waste to about 30% of the average plastic brush. These are all good options as is looking for toothbrushes that use biodegradable packaging.

How about it, are you ready to reduce your carbon footprint and become part of the solution rather than part of the plastic problem?