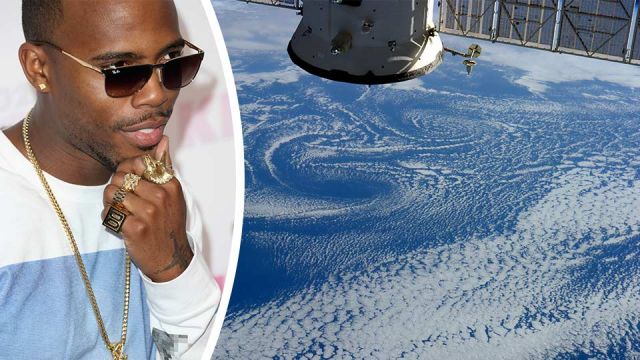 Lately there’s been a lot of talk about the shape of our planet. While many believe everything they are taught in school as it pertains to geodesy, the scientific discipline that deals with the measurement and representation of Earth, some are questioning traditional thinking — like rapper B.o.B. Now he is asking fans to help him prove that Earth is flat by raising funds for research on GoFundMe.

B.o.B has long been questioning the shape of planet Earth. Last year, even before he was trying to raise funds to support his endeavors, he tweeted this picture of two cities in the background, noting that there was no curve between them.

Take a look for yourself:

The cities in the background are approx. 16miles apart… where is the curve ? please explain this pic.twitter.com/YCJVBdOWX7

Also in 2016, the rapper, whose real name is Bobby Ray Simmons, dropped a diss track on astrophysicist Neil deGrasse Tyson, after Tyson tried to convince him that the Earth is not flat. After lots of heated debate, Neil deGrasse responded by saying that even if he thinks B.o.B’s theory is absolutely crazy, people can still like his music.

@bobatl Duude — to be clear: Being five centuries regressed in your reasoning doesn’t mean we all can’t still like your music

In this video from his “GoFundMe” page, B.o.B refers to himself as “Flat Earth Bob.” He is currently collecting funds so that he can send satellites up into space and find the curve. So far, he has $2,000 of his $200,000 goal. “I want to send these satellites so far into space, or into orbit as I can, so that I can find the curve,” says B.o.B.

Check out the video:

According to Celebrity Net Worth, the rapper currently has a net worth of $8 million.

It turns out, B.o.B isn’t alone in his beliefs. Last week NFL Star Wide Receiver Sammy Watkins announced that he believes the Earth is flat.

Rams receiver Sammy Watkins is among those who believe the earth is flat.

Some proponents of the Flat Earth Theory claim NASA employees guard the edge of the world to prevent people falling off.

Last February, NBA Superstar Kyrie Irving said that he believes the earth is flat and that it shouldn’t even be a conspiracy theory. Check out this video of him from February:

Kyrie Irving not only believes the Earth is flat but that the jury is still out on what dinosaurs actually looked like. pic.twitter.com/0lkra9gPE3

As seen in the video, Irving says that he has learned a lot of things from his educational systems that have been proven to be wrong. This past week, Irving was asked about his updated opinion on this highly debated topic and he had a very surprising opinion indeed.

Essentially, he said that he just wanted to have an open conversation and that everyone should question what they are taught. In a way, it was just a social experiment to see how people, especially the media, would respond.

“[My Flat Earth comments] became like, because I think different, does that knock my intellectual capacity or the fact that I can think different things than you?” Irving asked. “That was the intent behind it. Do your own research, don’t come to me and ask me.”

What do you think about the Flat Earth Theory? Let us know in the comments!