Toxic phthalates have been found in 75 percent of all school supplies for children, according to a recent report from the Center for Health, Environment & Justice. Phthalates are associated with behavioral problems, obesity, ADHD, early puberty, infertility and birth defects. They are also associated with serious health conditions such as asthma and cancer. 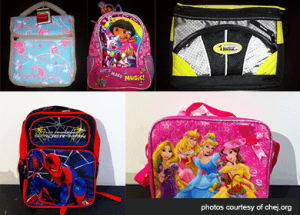 The Center for Health, Environment & Justice’s Report discovered that phthalates were found in a wide range of products and make vinyl and plastic soft and flexible. They are commonly found in products such as shower curtains, plastic wrap, cosmetics, food packaging products and more. Additionally they are used in commercial and industrial products such as medical tubing, solvents, insecticides and building materials. Phthalates are regulated and banned in children’s toys.

Here is a short list of the toxic products :

Disney Princess Lunch Box – Contains 29,800 ppm of DEHP phthalate, a level more than 29 times the government limit allowed for this chemical in toys.

Dora the Explorer Backpack – 16,200 ppm of DEHP, approximately 16 times the acceptable rate for a child’s toy. This backpack also contained another phthalate, DnOP at a rate of 69,300 ppm, which is 69 times higher than the allowable limit for phthalates in a child’s toy.

Pink View Binder – This binder contained 6,100 ppm of DEHP both inside and outside, a rate 6 times the legal limits.