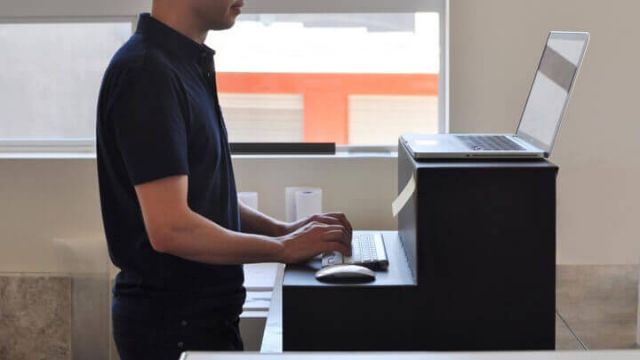 Ryan Holmes, the Vancouver-based founder of Hootsuite, is determined to make standing desks available to everyone.

Holmes, who founded the social media company Hootsuite in 2008, recently announced the launch of a line of folding stand-up desks which he designed. Holmes began looking into designing his own brand of stand-up desks due to sports-related back problems. Holmes wanted to be mobile and needed a stand-up desk which could be easily set up and packed away, but couldn’t find anything on the market which met his needs.

The result is The Oristand, which is made of industrial cardboard and designed to sit on top of a conventional desk and fold down flat when not in use or when being transported. The Oristand is lightweight, weighing in at just two pounds, so can easily be taken home from the office at the end of the day, or simply folded up and stored off to the side while you’re sitting. It’s made of 100 percent recyclable cardboard, which is more than can be said for many other standing desks. Best of all, it costs a grand total of $25.

I really like the simplicity of this idea and the fact that no one really has an excuse to not have a stand-up desk with something like this available for purchase. The price is also low enough to encourage employers of small or even medium-sized companies to purchase desks for their workforce without hurting the company coffers. While there’s currently only one size of Oristand available for purchase, it still caters to people with heights ranging from 5-feet to 6-feet tall. Holmes and his business partner, Steve Suchy, are in the process of developing different-sized models.

Why standing is so important

If you’ve been paying attention to social and health media over the past two years or so, chances are you’ve heard about the research findings which prove that sitting all day is literally killing people.

And when it comes down to it, they have a point. Research published in the Scientific American showed that the average American sits for 13 hours a day. We sit as we drive or commute to work, sit at our desk at work, sit during our lunch hour, sit on the drive home, then make dinner and continue to sit on the couch as we watch TV or read a book.

Many people think that they can reverse the detrimental effects of so much sitting by embarking on a daily one-hour workout at the gym, a long run or a swim. But scientists have found that periods of prolonged sitting can be seriously detrimental to our health, regardless of regular exercise. One study found that individuals who sit for extended periods of time put themselves at significantly greater risk of all-cause mortality (46 percent increase), cardiovascular disease (80 percent increase), insulin resistance, elevated blood pressure, slowed metabolism, weight gain and lowered core strength.

In case you weren’t paying too much attention to that previous paragraph: sitting increases your risk of death by almost 50 percent. That’s not something to be taken lightly, however, the sad fact is many people have ignored the implications of this study and continue to base their life around sitting.

What you can do to lower your risk

The solution is a surprisingly simple one: vary your body position on a regular basis. Many people make the mistake of taking these findings at face value and simply standing all day long. While it’s good to stand for part of the day, remaining in the standing position all day is also detrimental to your health. The point is not to avoid sitting but to avoid remaining in one single position for any length of time.

But because many people are unable to change their workplace environment, they think that there’s little they can do to remedy this situation. They couldn’t be any further from the truth. Before I quit my office job a year ago, I had a system to avoid staying still for any prolonged period of time. It would look something like this:

And so on. You get the picture — there’s a myriad of ways to vary your movement and change things up, so don’t think that you’re trapped in this corporate world which is forcing you to sit. Get creative, and your body will thank you for it.

Find out more about what you can do to prevent the detrimental effects of prolonged sitting.