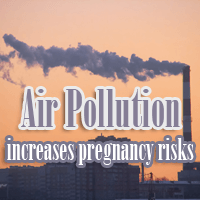 Air pollution has been previously linked to increased risk of developing breathing and lung problems, such as asthma and COPD. However, new research reveals previously unknown risks to unborn children.

The study showed that for pregnant mothers who are exposed to high levels of air pollution, the risk to their unborn children increases significantly. Researchers evaluated data for air pollution levels and the numbers of still births occurring for regions within a six-mile radius of air monitoring stations. What they discovered verified their suspicions – mothers exposed to the highest levels of carbon monoxide, nitrogen dioxide and sulfur dioxide had higher numbers of still born children.

Air toxins take the form of industrial air pollution and pollution from cars and trucks. Another form of air pollutant is second hand smoke from cigarettes and other tobacco products. It has been known for decades that exposure to these pollutants and toxic chemicals found in them can have a dramatic impact on lung health and contributes to the development of asthma.

Researchers are still unclear about the specific mechanics of how chemical toxins in air pollution result in fetal death. However, the study out of the Robert Wood Johnson School of Medicine suggests that pregnant women should be conscious of air quality issues in their daily activities. Although still births are still relatively uncommon, the loss of even a single child due to air pollution is cause for concern.

In addition to commonly accepted prenatal health precautions, such as avoiding smoking cigarettes and getting good prenatal care, mothers are advised to avoid running errands outside when air quality conditions are poor and smog is present. If they are already sensitive to air pollution because of asthma or other health issues, special care should be taken on days when air quality is even moderately questionable.