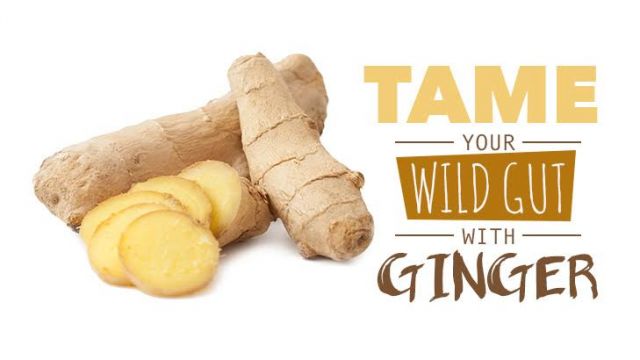 To many people, nausea is one of the worst, most-dreaded feelings in existence. Whether it’s from food poisoning, a seasonal bug, or motion sickness, just the thought of a churning gut and stomach acid welling up in your throat is enough to make spines shiver.

In order to combat this icky feeling when it occurs, some of us turn to over-the-counter medications such as Dramamine. However, Dramamine is an anticholinergic drug, and this class of medication has been linked to a higher risk of dementia. Other anti-nausea medications may not be in this category, but they often come with unwanted side effects, such as drowsiness or worse.

So, what’s one to do when nausea hits, and medications aren’t a great option? Enter ginger.

This humble rhizome (above-ground root) has been embraced by many ancient healing traditions, including Ayurveda, for thousands of years. It has many medicinal uses, but one of the most common is its role in digestive health, namely nausea prevention. There is a substantial body of research backing this up.

To summarize the role of ginger in the health of the digestive system, the authors of a 1998 review published in the journal Advances in Therapy wrote:

“The efficacy of ginger rhizome for the prevention of nausea, dizziness, and vomiting as symptoms of motion sickness (kinetosis), as well as for postoperative vomiting and vomiting of pregnancy, has been well documented and proved beyond doubt in numerous high-quality clinical studies. The use of this ancient medicine for gastrointestinal problems (stimulation of digestion) has been given scientific approval.”

Through this experiment, the researchers found that participants experienced less nausea, and a shorter recovery time from the nausea, when given ginger beforehand. On their results, the study authors summarized:

“Ginger effectively reduces nausea, tachygastric activity [rate of electrical activity in the stomach], and vasopressin [an antidiuretic hormone] release induced by circular vection. In this manner, ginger may act as a novel agent in the prevention and treatment of motion sickness.

What else can ginger do?

Ginger’s role in taming an unhappy gut is just the tip of the iceberg. This rhizome is also a wonderful ingredient in a cleanse or detox regimen, and it may even help to improve circulation and alleviate chronic pain. Ginger has also been studied for its potential to fight cancer.

That’s a whole lot of goodness from one delicious superfood!

How to use ginger

The best ginger you can get is fresh and organic. If you’re going on a car, airplane, or boat trip and have a history of motion sickness, peel some of the root, and chew a small piece before your trip, and/or while you are in motion.

You can also steep the peeled root in boiling water for a few minutes to make a delicious tea. Sweeten the drink with some raw honey if you desire. Sip some of this tea before your trip, and keep a travel cup handy for the journey.

Because of the numerous health benefits of ginger, not to mention its wonderful flavor, why not add it to more of your dishes? Roasted meats and veggies, soups, stir-fries, and smoothies can all benefit from the presence of ginger! Why not do a recipe search today?