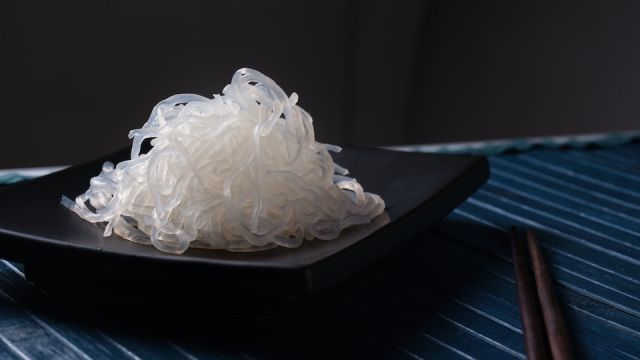 For people with gluten sensitivities or those pursuing a low carb lifestyle such as the keto diet, eating a big bowl of conventional pasta is a no-no. But, if you still want to enjoy a type of pasta, there are a few “noodle” options to consider. One popular, low carb pasta replacement is made from the stem of the konjac plant. However, if you go for konjac noodles, there are a few things you need to know upfront – like if you eat too many, you could end up in the emergency room, and also, these noodles are made from the same material that is found in cosmetic sponges. Oh my…

Konjac is not new

Konjac noodles, also known as shirataki noodles, have been eaten in parts of Asia since the 6th century and have gained popularity in the west due to their low calorie, low carb, and high fiber content. Eating konjac noodles leaves you feeling full because they are mostly fiber and water. This seems to make it an almost “perfect” option for those watching their waistlines, wheat and carbs.

In Japan this plant is known as “a broom for the stomach” because of its ability to cleanse the digestive system. However, the high amount of fiber in these noodles can be dangerous as jewelry designer and Home Shopping Network Host Carol Brodie found out.

Woman ends up in the hospital after eating diet noodles

Brodie was excited to try the low carb konjac noodles after learning that each package only contained 25 calories. The prospect of being full after eating these noodles was attractive, and she ordered several boxes of Better Than Pasta brand konjac noodles from Amazon.

After eating four packages at one time, she began to feel horrible.

She went to the hospital where doctors found a solid, indigestible mass known as a bezoar in her digestive tract. This mass was comprised of undigested noodles. To ease her discomfort, Brodie remained on a diet of soup and Diet Coke for more than a month. Now, she wants everyone to know what happened to her and has put the warning out there.

Besides speaking publicly about her scary event, Brodie has filed a lawsuit against Green Spot Foods, the Wisconsin company that makes the Better Than Pasta noodles. She is also suing Amazon for selling a product that she feels is dangerous.

According to Brodie’s attorney, Rosemarie Arnold,

“When you swallow it, it doesn’t dissolve in your stomach and that’s why it was able to keep you full for so long. This company knew that this product was not safe to consume but they put it on Amazon.”

The nutrition information on the Better Than Noodles label states that each package contains about three servings, and each serving has four grams of fiber. Perhaps one thing that led to Brodie’s distress is that she gobbled up four packs of noodles in one sitting. This equates to 48 grams of fiber, which is close to twice the FDA’s Recommended Daily Value of 25 grams. Additionally, the Amazon listing for these particular noodles states that it is important to drink plenty of water when eating the noodles because of the amount of soluble fiber that they contain.

Konjac contains glucomannan, a type of soluble fiber that has been studied for its natural laxative effects. This would explain why it is referred to as “a broom for the stomach.” A study published in the journal Nutrition suggested that a 4.5-gram supplementation of konjac glucomannan per day, “promoted the defecation frequency in healthy adults,” and it also increased the bulk of each stool. This would describe why one Amazon reviewer mentioned  had this to say about the noodles, ” they didn’t fully digest in my stomach so you can imagine the poop situation.“

There is good news. Noodles made from the fibrous plant are not your only option if you are seeking low carb, gluten-free noodles. Other delicious options include chickpea pasta, zucchini, or squash noodles or even delicious keto-friendly pasta made from mozzarella and egg yolk.

Takeaway: If you are set on eating shirataki noodles, caveat emptor is a must. Reading labels no matter what you are eating is important, and if you are going to eat high fiber foods, mind the serving size, and consume plenty of water.