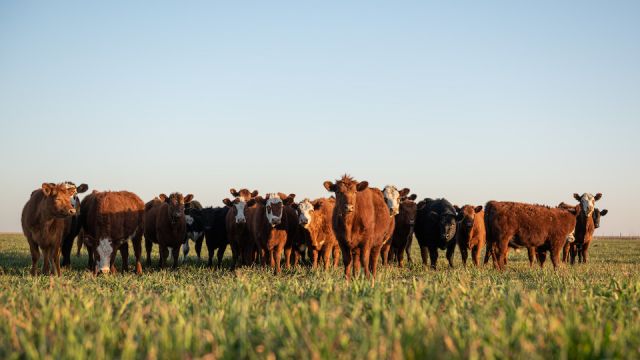 That’s right. Take beef, for example; cattle that are allowed to free-range on grass, move around under the sun, and live a stress-free life are much healthier than beef that comes from cows raised on industrial farms and fed things they should never eat. Let’s take a closer look.

The first thing that we need to do is set straight some terminology as it pertains to various types of beef.

The difference between grass-fed beef and grain-fed beef

Cows are naturally meant to graze on grass in wide-open pastures. However, with the increase in demand for meat, farmers began to feed cattle grain-based feed made from corn and soy.

The difference between grass-fed beef and grass-finished beef

Most of the cattle raised by responsible farmers graze in open pastures during the warm months, but that is not an option in the colder months when there is snow on the ground. During the winter, farmers feed their cattle feed containing corn and soy. However, since they graze for the majority of the year, they may be labeled grass-fed.

Beef that is from a cow raised entirely on grass will say “grass-finished” on the label. These animals will graze on grass during the summer and eat alfalfa in the winter. This term is not regulated by the USDA.

Organic and grass-fed or grass-finished beef are two completely different things. The USDA regulates the term “organic.” To be certified organic, farmers have to complete an onerous certification process that can take up to three years. Organic beef needs to be raised on a farm that does not use pesticides, genetic engineering, or sewer sludge.

In the case of beef, you can purchase organic, grain-fed beef. What this means is that cows from an organic farm were given organic feed, which includes organic corn or soy-based products. In addition, animals raised on an organic farm must live in a way that protects the welfare of the animals.

When shopping for grass-fed beef, look for meat that has the American Grassfed Association (AGA) stamp of approval. The AGA is a trustworthy group that guarantees that animals do not receive hormones, antibiotics, or grains.

Mahatma Gandhi once said, “the greatness of a nation and its moral progress can be judged by the way in which its animals are treated.” By his standards, the commercial meat industry in the United States points to grim flaws in our national character. However, there is good news. More and more farmers and ranchers are choosing to graze their cows, bison, sheep, and goats on ranges, where they feed on pasture grasses…just as nature intended.

As mentioned, grass-fed animals are treated humanely and fed only natural grasses, and as a result, the meat and milk that comes from these animals has significant health benefits. Most animals commercially raised for meat and dairy products in the United States come from Confined Animal Feeding Operations, also known as CAFOs. Animals that are raised in CAFOs often have no space to walk or move around at all. The stress and abuse of these conditions are truly horrifying, and many meat-eating Americans choose not to think about it, which only perpetuates the cycle of mistreatment.

Known as a nutritional powerhouse, grass-fed beef has numerous health benefits that make it well worth the extra you might have to pay.

As stated earlier, cattle that are allowed to range freely on grass are generally happy cows that are not crammed into tight spaces where disease can run rampant. Almost 80% of antibiotics sold in the United States go to conventionally raised livestock like beef. Sadly, as the demand for meat skyrockets, farmers crowd animals into smaller and smaller spaces where they can get sick easily. Using antibiotics in meat causes antibiotic resistance in humans. Additionally, grain-fed cattle have acidic intestinal tracts that can cause issues like E. coli, which can be fatal in people who eat undercooked beef.

According to Consumer Reports research:

“One of the most significant findings of our research is that beef from conventionally raised cows was more likely to have bacteria overall, as well as bacteria that are resistant to antibiotics, than beef from sustainably raised cows. We found a type of antibiotic-resistant S. aureus bacteria called MRSA (methicillin-resistant staphylococcus aureus), which kills about 11,000 people in the U.S. every year, on three conventional samples (and none on sustainable samples). And 18 percent of conventional beef samples were contaminated with superbugs — the dangerous bacteria that are resistant to three or more classes of antibiotics — compared with just 9 percent of beef from samples that were sustainably produced. We know that sustainable methods are better for the environment and more humane to animals. But our tests also show that these methods can produce ground beef that poses fewer public health risks.”

Not only is grass-fed beef good for your health, but it is also good for the environment. Research shows that traditional grass-based beef production can help decrease greenhouse gas emissions, create a diverse ecosystem, and improve the quality of run-off water from pastures where cows graze. In short, raising cattle as they were meant to live creates a much smaller footprint, and unlike conventional cattle farming in tight quarters, it brings much good to the earth.

Keep in mind that moderate consumption of meat is recommended. A good rule of thumb is to treat meat like your side, not your main dish.