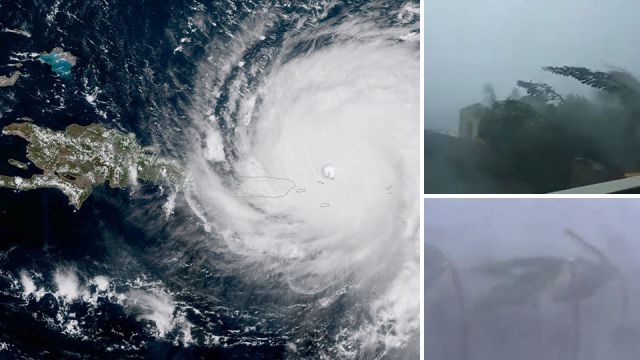 Hurricane Irma is currently unleashing its almighty power in the Caribbean. Check out these crazy videos from the record breaking storm.

Along with Saint Barthélemy, Saint Martin is taking a direct hit, as this video shows flooding and an obliterated marina.

#Hurricane #Irma has
destroyed the Island of #SaintMartin. Waiting for the second hit from #IrmaHurricane pic.twitter.com/dbGVIdoCuF

3. Damage and destruction in Saint Martin

This next video, also from Saint Martin, shows a flipped car and flooding. Unfortunately, this only solidifies the storm’s category 5 wind predictions.

4. Hurricane hunters fly into the storm

Flying a plane into the eye of a hurricane isn’t usually the smartest idea, unless you are hurricane hunter trying to garner information about the storm. This video shows how far the NOAA will go to learn more about the hurricane.

This next video shows a man from Anguilla filming his local area.

A new video from NOAA satellites shows the defined “eye wall” of the storm, viewed from space.

7. The view from Saint Thomas

Along with the wind, rain and quintessential embodiment of what a strong hurricane looks like, Irma is bringing huge waves and a storm surge, as seen in this video from Saint Thomas.

St. Thomas Virgin Islands Being Affected By Irma While She Heads Towards Puerto Rico Then Us🙏🏽#HurricaneIrma #IrmaHurricane #hurricaneirma pic.twitter.com/HF1kznjSK9

This video from Anguilla illustrates the ferocious winds being unleashed by the hurricane.

The Angry winds of hurricane Irma in Anguilla British West Indies. Let our prayers be constant for our family and friends in the caribbean. pic.twitter.com/b8BIUUOt0G

The storm’s surge in coastal areas is a major threat for damage. This video from Saint Martin offers a clear example of how scary it can be.

This video shows the start of the hurricane force winds in a large metropolitan area of San Juan, Puerto Rico — soon to be hit full-force by Irma.

Meanwhile the #HurricaineIrma is now coming in #SanJuan #PuertoRico pic.twitter.com/Np4xoAcDUS

If you’re in the hurricane’s projected path, use these videos as a reason to take extra precautions for you and your loved ones. Stay safe out there!