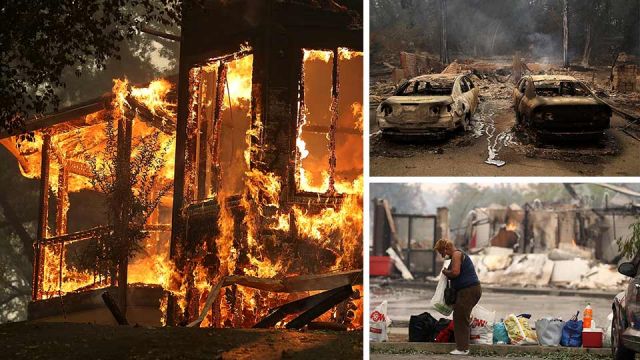 PARIS–On Monday evening in Paris, a fire broke out in the historic Notre Dame cathedral. The blaze was active for hours and had firefighter from dozens of districts around Paris responding. Unfortunately, many priceless historical artifacts were lost to the fire.

Among the destruction was the cathedral’s signature spire, which collapsed due to the heat of the flames within the first few hours. Fundraisers for a restoration of the cathedral are already under way, but the big question is, “Why are they necessary?”

According to The Daily Beast, a fire alarm was triggered at 6:20pm, a full 23-minutes prior to the blaze taking shape. The alarm was investigation, but because there were no visible signs of a fire, it was dismissed as a false alarm.

Here are some of the shocking videos from Notre Dame.

CALIFORNIA–Several highly intense and dangerous wildfires are currently scorching areas throughout California. In northern California, the fires gained a tremendous amount of strength this past Sunday evening as a result of favorable weather conditions in the area. Officials are reporting that the wildfires are being wind-driven across nearly 119,000 acres.

At the moment, 200 firefighters, six helicopters and six airplanes are trying to decelerate devastation across the state. So far, there have been 13 reported deaths and more than 100 reported injuries, ranging from severe burns to smoke inhalation.

Here is a map, released by NASA, of where some of the more intense wildfires are currently burning, with populated areas like Santa Rosa and Napa Valley right in the midst of the worst.

It should be noted that there are other serious wildfires in parts of the state, like in Anaheim Hills. Unfortunately, there will be no way to tell how many homes have been destroyed until after the fires end.

What we can report for certain are the mind-boggling videos and pictures that people are sending out from areas in the ravaging inferno.

Here are 20 of the most shocking pictures and videos, which help depict the horror that so many people are unfortunately going through.

1. Santa Rosa neighborhood, before and after

Santa Rosa’s Coffee Park neighborhood from the air, before and after fire. pic.twitter.com/zaR9QZPKpM

Thanks @maddow for leading w/the #CaliforniaFIRES tonight. 10 people dead so far in #NorCal. Here’s the video of #SantaRosa I posted today: pic.twitter.com/ha6041Wib3

“It’s all hands on deck”

4. Photos from Sonoma and Napa counties

7. Satellite imagery of the fires

8. A home goes up in flames

A wind-driven brush fire raced through the Anaheim Hills area, charring 4,000-5,000 acres and igniting several homes ablaze on Monday as of 5pm. The fast-moving vegetation fire prompted mandatory evacuations for 1,000 homes and triggered freeway closures in the area. The blaze was 0% contained. Swipe left/right for dramatic images from Eyewitnesses @juniorolivas @mattdames @dumbfrog @vanessa_borquez @housesofoldtowneorange @lukitoh @johnandjennharper @4angelskreations @joncooley and @holasoygeo. Continuing coverage from Eyewitness News on ABC7 and abc7.com. Share your photos and videos, shot from a safe distance, with #abc7eyewitness.

As a Colorado native I’ve seen wildfires up close. Please don’t take risks if you’re in the area in Northern California! They are very unpredictable and can shift on a moment’s notice. Evacuate and be safe. We can rebuild homes and businesses. I also want you to join me in sending prayers to the brave firefighters risking their lives right now to fight this. #Repost @nbcnightlynews ··· #California #SantaRosa #Wildfire #Fire

View out my window as I head through #Napa neighborhood near Silverado Resort pic.twitter.com/pzbF0jTpCq

Much of wine country burned today in a wave of fires, like this mobile home park in Santa Rosa. @kqednews is covering the #santarosafire #napafire and #sonomafire that killef at least 10 people, forced 20,000 people to flee and destroyed at over 1,500 structures in #napa and #sonoma (: Jeremy Siegel/KQED)

This fire has me in mixed emotions, but seeing one of my close friends house in ashes, is killing me #SantaRosafire pic.twitter.com/6qICNXOV7M

the view of the smoke from downtown Santa Rosa #SantaRosaFire pic.twitter.com/WltD0hiaD3

Nature would be kind on us?

To anyone affected by this fire, please stay safe and we hope your houses are safe too. #canyonfire2 #anaheimhills #fire

21. Fire at farm in Napa Valley