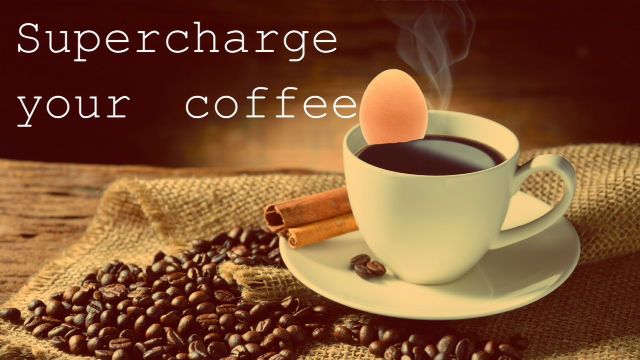 Do you enjoy a nice, fresh cup or two of organic coffee daily? If so, we have good news, as research clearly demonstrates the positive impact that coffee has.

Furthermore, the benefits don’t have to stop with a rich cup of organic coffee – you can actually take your morning cup a step beyond depending on what you put in it.

Here is a little of what we uncovered:

Caffeine has a stimulant effect on the central nervous system, which raises metabolism and increases the oxidation of fatty acids. It also mobilizes fatty acids from fat tissues and there is good evidence that it increases athletic performance.

Coffee may reduce your risk of type 2 diabetes

Type ll diabetes is skyrocketing in America and now afflicts almost 1 in 8 people. Coffee appears to do a good job regulating blood sugar. Numerous studies demonstrate an association between coffee and a 23 percent to 67 percent lower risk of diabetes.

A review of 18 studies involving almost 460,000 participants found that each additional cup of coffee per day lowered the risk of diabetes by 7 percent. Interestingly enough, the more coffee that study participants drank the lower their risk. Researchers claim that people who drink several cups of coffee per day are less likely to develop diabetes.

Everyone knows that if you want to stay awake you drink coffee, right? Well, we bet you did not know that drinking coffee can also boost your brain power and your mood. Caffeine blocks the effects that the neurotransmitter adenosine has on the brain.

By doing so, the caffeine increases brain activity and the release of neurotransmitters such as dopamine and norepinephrine. Controlled trials have examined the effects that caffeine has on the brain and have found that it improves mood, reaction time, memory and overall cognitive function.

Optimal liver function is vital to health. The results of our modern life, such as a poor diet and excessive alcohol consumption, cause the liver to work at less than full speed. Numerous studies have indicated that coffee can lower the risk of cirrhosis by up to 80 percent in people who drink four or more cups of coffee per day. Coffee may also reduce the risk of liver cancer by 40 percent.

Coffee beats fruits and vegetables as the best source of antioxidants in the American diet. Many people think that coffee is nothing but black water. Well, you can now tell them that they are wrong. One cup of coffee contains:

Wait… there is more good news

You can reap the benefits of a great organic cup of Joe plus the added benefits of the following add-ins.

Of course, those who have been using coconut oil for years never truly believed the lipid hypothesis that said saturated fat was bad for us. More and more evidence is being uncovered to say just the opposite.

Healthy saturated fat is not only good for us, but essential for numerous bodily functions. Coconut oil is described as one of the healthiest saturated fats on Earth.

Coconuts are revered all over the world for their amazing medical and nutritional properties. They have been used for ages by diverse cultures and races, all of whom respect the magnificent qualities of this tree-growing nut.

Although coconut oil is about 90 percent saturated fat, it is good for the body. It contains about 50 percent lauric acid, which helps to prevent high blood pressure and high cholesterol levels. The short and medium-chain fatty acids help to regulate thyroid and enzyme function, and also help with weight reduction.

Coconut oil improves metabolism and takes stress off of the pancreas. This tropical wonder improves digestion and increases the absorption of vitamins, amino acids and minerals.

Replacing processed coffee creamers with organic coconut oil is a smart move. Although it may sound strange, the result is actually quite delicious and highly nutritious. The combination of caffeine and saturated fat gives the body a great and lasting energy boost.

The best way to prepare a tropical twisted coffee drink is to brew a high-quality organic cup of coffee and place it in a blender. Add in one tablespoon of organic coconut oil, blend and enjoy.

The resulting coffee drink is frothy and rich, with a wonderfully smooth taste that is very satisfying. If you like your coffee sweetened, add one teaspoon of organic coconut crystals.

Adding coconut oil to your coffee is a great way to supercharge and give your body a burst of energy to make it through the day. Not to mention all of the other amazing health benefits of coconut.

To learn more about how coconut oil can boost your health go here.

Ancient Egyptians valued the medicinal effects of this spice since 2000 BC. Used as a cure for everything from coughing to arthritis, cinnamon’s healing properties come from the essential oils found in the bark.

These oils are known to have both anti-inflammatory and anti-microbial properties. Furthermore, cinnamon can help control blood sugar spikes. Research has shown that sprinkling a little cinnamon in your coffee can reduce its impact on raising blood glucose levels.

Research from Wheeling Jesuit University found that just smelling cinnamon can help to increase memory and mental alertness. In another study, it was found that cinnamon extracts can halt the aggregation of tau proteins, a condition that is common in people suffering with Alzheimer’s.

The essential oils in cinnamon allow it to be classified as an “anti-microbial” food. Research demonstrates that it can help stop the propagation of fungi and bacteria, including yeast Candida.

Add an organic cinnamon stick or a teaspoon of organic ground cinnamon to your ground coffee before brewing. This will make your coffee taste great, and your whole house will smell wonderful.

According to some things you may read, raw eggs are supposedly not good for you. However, if you get your eggs from healthy, free-range chickens they are actually very good for your health and loaded with antioxidants. Many people are deficient in healthy proteins and fats, and raw eggs can provide both.

Pastured eggs are the best type to consume as they have extra choline, vitamin E, vitamin A, vitamin K2, omega-3-fatty acids, vitamin D, and beta-carotene from the grass and bugs that free range chickens consume. All of these nutrients help support the brain, nerves, hormones and glands.

According to legend, Swedish egg coffee was a recipe that immigrants carried with them “on the boat” from Sweden to America in the late 1800s. This coffee drink is made by combining coffee grounds with a raw egg and then adding the mixture to boiling water and straining it. Because there is no filter used, the essential oils in the beans are still intact.

Here is another way you can enjoy all the benefits of pastured raw eggs:

Brew 35 grams of organic coffee beans in a French press. Separate the egg yolks from the whites of 3 pastured eggs and put the yolks in a blender along with your coffee and coconut oil combination. Blend on low for a few seconds. Add one teaspoon of coconut crystals and ¼ teaspoon sea salt, and blend for a few more seconds.

Salmonella poisoning from raw eggs has been grossly exaggerated. A 2002 study by the United States Department of Agriculture indicated that only 2.3 million of 69 billion eggs produced annually are actually contaminated with salmonella. This equates to 1 in every 30,0000 eggs. The majority of these come from chickens who are kept in unhealthy conditions – only sick chickens lay salmonella-contaminated eggs.

If you choose organic and free range, less than 1 in 30,000 may be contaminated. Salmonella is a very common micro-organism that is found almost everywhere – and is actually just as likely to proliferate on cooked food kept in the fridge.

What you don’t want to put in your coffee

Refined sugar of any type: Just a spoonful of sugar surely won’t hurt, right? Well, that is wrong. Food manufacturers don’t want us to know what really happens to our bodies when we consume sugar. Most of us associate sugar with energy – and rightly so – it provides an immediate source of energy. However, unless you are an elite athlete, which most of us are not, this can be a major problem.

Fake liquid coffee creamers: Non-dairy creamers may contain sodium caseinate, a chemically-altered and extruded form of casein, which in its final form is not even considered a dairy product by the FDA due to the sheer amount of chemicals used.

Fake powdered coffee creamers: Powdered non-dairy coffee creamers frequently contain hydrogenated or partially hydrogenated oils, or, as they are more commonly known, trans fats. Some brands contain up to one gram per tablespoon. Hydrogenated oils are created by adding chemicals agents, sometimes metals such as platinum and nickel, to pressurized and already-processed oils to further alter their molecular structure. Instead of sugar, many non-dairy creamers contain corn syrup or corn syrup solids.

One final tip – never make your coffee with tap water

According to the Environmental Working Group, water supplies in the United States are contaminated with over 140 chemicals which are not regulated by any safety standards.

When the EWG conducted their own test of water supplies serving 231 million people, they found more than 119 unregulated chemicals. This is not the whole story, either. 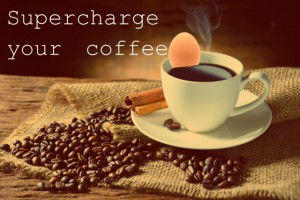 If you are on a public water line, it is likely that your household water supply is loaded with chlorine. Chlorination has been around for nearly 100 years. While chlorination eliminated waterborne diseases such as typhoid fever, hepatitis, dysentery and cholera, and is used now to keep bacteria at bay, mounting evidence strongly suggests that there is a downside to this heavily used substance.

In our bodies, chlorine breaks down and is not harmful. However, it is when chlorine reacts with organic materials that are already dissolved in the water, and creates toxic disinfection byproducts (DBPs).

The two main DBPs that form when chlorine reacts with organic materials are trihalomethanes (THMs) and haloacetic acids (HAAs). THMs are classified as Cancer Group B carcinogens, and research has shown them to cause cancer in some lab animals.

So, go on and enjoy a delicious hot cup of organic Joe and supercharge it today!!