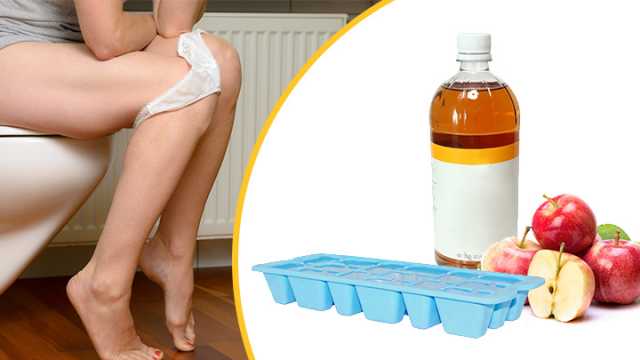 Hemorrhoids. It’s a condition that few people are comfortable discussing, and even fewer will even admit that they’re suffering from. Hemorrhoids come in many (painful) shapes and forms, but the most common varieties are those that take up residence on the rectum or around the anus. Here’s how to treat them with apple cider vinegar ice cubes, bath and more.

Internal hemorrhoids aren’t actually visible, as they’re located a small distance inside the rectum. While they may not hurt a lot, they’ll be the cause of a lot of internal bleeding, which I’m sure you can agree is not ideal.

Are hemorrhoids the same as piles?

Those few people who are comfortable talking about hemorrhoids and piles often interchange their terminologies and assume they’re generally the same thing. But while all piles are a form of hemorrhoids, not all hemorrhoids are classed as piles.

That’s because piles are hemorrhoids that have become inflamed, growing larger due to inflammation and a whole lot more painful. Surprisingly, all people have hemorrhoids, however, it’s only when excessive pressure or straining is applied to them that they turn into piles. It’s estimated that a whopping half of the U.S. population is affected by piles, and 10 percent of those people will require surgical treatment to remove their piles.

Clearly, if you have piles or inflamed hemorrhoids, you want them to be gone ASAP. If possible, you also want that hemorrhoid treatment to be natural, and to avoid a very unenjoyable trip to the doctor. Enter apple cider vinegar.

Apple cider vinegar has been the star of The Alternative Daily for some time now. We’ve discussed how it can make an excellent natural treatment for sunburn and candida, a great way to speed up weight loss, and a potent elixir for stopping leg cramps at night and lowering blood pressure. Given all its wonderful uses, it should perhaps come as no surprise that apple cider vinegar can also provide an effective treatment for hemorrhoids.

How to use apple cider vinegar for hemorrhoids

There are four main ways in which you can use apple cider vinegar for hemorrhoids. Depending on where your hemorrhoids or piles are located, and the level of inflammation associated with them, one of the treatments may be more suitable than the others. Use your best judgment, and if in doubt consult your doctor first.

This is one of the weirder treatments we’ve ever recommended, but certain people seem to think it works wonders for their piles…so why not give it a shot? Simply mix together a solution of one part water and one part raw, organic apple cider vinegar. Pour the mixture evenly into an ice cube tray, and leave in the freezer until frozen solid. After the cubes are ready, gently rub one apple cider vinegar ice cube directly on your hemorrhoids twice a day, without putting them inside your rectum. If everything works out as it should, the ice will reduce swelling and pain while the apple cider vinegar should speed recovery from the hemorrhoids.

If you’re suffering from internal hemorrhoids, get back to basics with your apple cider vinegar, simply adding a tablespoon of apple cider vinegar to a glass of water and drinking twice a day. Drinking this elixir of health, which just so happens to also help with a wide range of other conditions, should help to treat your internal hemorrhoids and hopefully stop the associated bleeding.

To make an apple cider vinegar sitz bath, clean your bathtub thoroughly. Then, fill the tub with three to four inches of warm water. Now add around half a cup of apple cider vinegar to the water. Soak in the bath for 20 to 30 minutes, up to twice a day.

It’s possible that apple cider vinegar may make your hemorrhoids worse, however, anecdotal evidence suggests that this is uncommon. A good practice is to use only a small amount of apple cider vinegar at the beginning of self-treatment. Then, increase the concentration until you reach the point before the area starts stinging. Because this isn’t a medically proven treatment, it’s always a good idea to consult your doctor. Check with with a professional if you’re in doubt, losing a lot of blood or in considerable pain.

Has apple cider vinegar worked for your hemorrhoids? Do you have other tricks we didn’t mention? Let us know in the comments below!